“The rental shortage has hit regions the hardest. However, greater Darwin, the ACT, greater Hobart and to a lesser extent greater Adelaide are all feeling extreme pressure with very low vacancy rates and rising rents,” said Suburbtrends director Kent Lardner…

Louis Christopher, SQM Research managing director, said rental supply was a big challenge for the regions which were experiencing large population inflow from interstate or from the cities.

“It doesn’t take long for a region to reach full capacity if the population shifts in that area,” he said. Rental growth has gone vertical since the onset of COVID.

The rise in rents follows the national rental vacancy rate falling to an 8-year low, according to SQM Research: As a result, rental growth is solid to strong almost everywhere outside of Melbourne and Sydney, which have been hit hardest by the collapse in immigration (including international students): Rental growth is generally strong outside of the two major cities.

Detached houses have also experienced far stronger rental growth than units. The difference is especially apparent across Melbourne and Sydney, whose apartment markets have been hardest hit by the collapse in migrant (international student) numbers. 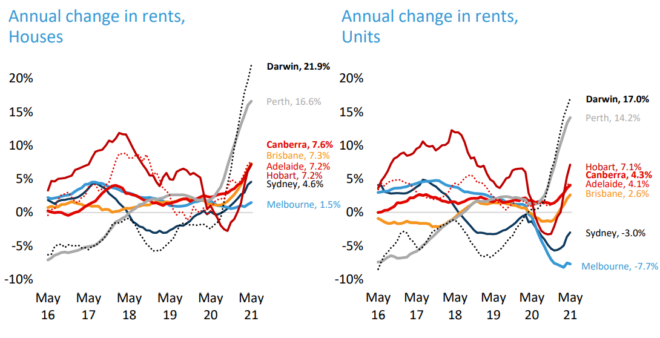 Melbourne’s and Sydney’s unit markets have been hardest hit by the collapse in immigration.

If immigration is rebooted to pre-COVID levels, the rental market will tighten even further, placing even more pressure on renters.