The Australian Bureau of Statistics (ABS) today released the national accounts for the March quarter, which registered a 1.8% rise in real GDP over the quarter with GDP also rising 1.1% through the year.

The seasonally adjusted GDP rebound was driven by household consumption expenditure and inventories, which each contributed 0.7% to growth: The next chart shows the ongoing rebound in GDP against the record 7.0% contraction in the June quarter on 2020: Australia’s real GDP is now tracking 0.8% above its December 2019 peak, whereas GDP per capita is now 0.2% higher: GDP is now running above its pre-COVID peak.

Quarterly final demand, which excludes export volumes, rebounded another 4.6% over the December quarter, with all jurisdictions experiencing rebounds: In the year to March 2021, final demand rose by 1.9% nationally, with only Victoria recording falls: As already reported this morning, the terms-of-trade rocketed by 7.4% over the March quarter and was up a whopping 15.4% year-on-year: 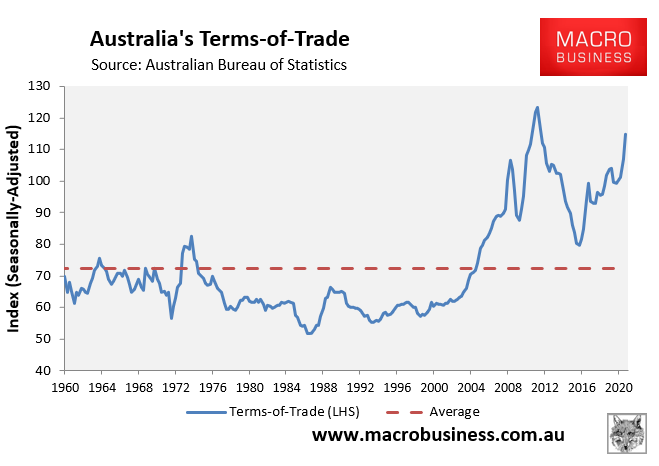 Accordingly, the terms-of-trade bolstered national disposable income, which rose by 3.4% in per capita terms to a new record high over Q1: Moreover, nominal GDP growth rose by 3.5% over the quarter to be 4.0% higher over the year: 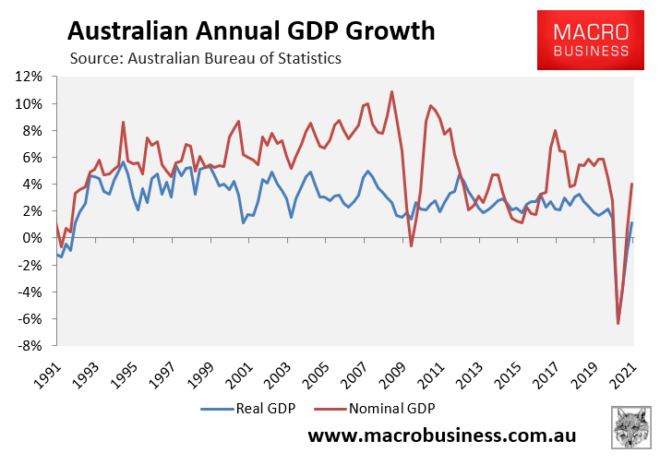 Average compensation of employees rose by 0.1% in the March quarter in nominal terms to be up 3.3% over the year: Real GDP per hour worked (i.e. labour productivity) rose 0.8% over the March quarter to be up 2.5% year-on-year: The household savings ratio also retraced by 0.6% to 11.6%. This helped to bolster growth in household consumption expenditure: Finally, the growth baton is successfully being passed from governments (via stimulus) to households: Baton pass from government to households.

In summary, after the Australian economy entered its first ‘technical recession’ since the early 1990s, the economy is experiencing a V-shaped recovery. We expect the recovery to continue through 2021.