This is the third in a series of four posts on the contrarian view for inflation, this time dealing with the inventory supercycle.

To stay updated on the rest of this series, sign up to receive email updates from us via the form below

What is an inventory cycle?

The basis of most business cycles has an inventory cycle at the core. The stocking and de-stocking cycles are what typically drive economies both into recession and out of recession.

I’m going to start with a grossly simplified illustration. Assume we have:

We are looking at the changes from period to period. For some companies, the periods are days. For others, the periods are weeks, months or quarters. Both the retailer and the wholesaler target 1.5x the current period’s sales as inventory.

Now let us look at the effect of a drop in demand. Say sales drop 10% for the retailer and then stay at the new level:

As you can see, the effect is more significant the further down the supply chain you go. A 10% fall in sales for the retailer is a 60% fall for the manufacturer. In the initial stages of a recession, this effect worsens the cycle as manufacturers then fire staff/pull back spending.

But, it works in the other direction as well. When the cycle turns, the opposite effect kicks in. Now look at retail sales returning to 100: 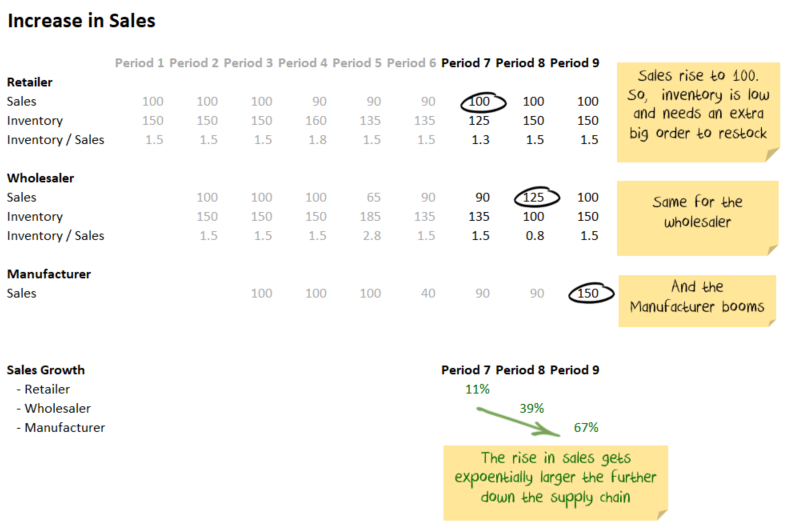 It is also worth noting the automatic stabilisers:

Because different companies have different periods (e.g. daily/weekly/monthly/quarterly), when you blend them all the overall effect on the economy is not as extreme.

Later in this post, I’ll explain an inventory supercycle.

Purchasing manager indexes (often called PMIs) are a survey of businesses. They can give a real-time look at economic conditions, but they can reverse quickly.

The latest reads are overwhelmingly positive, which is why many are worried about inflation:

It isn’t a particularly heroic call to suggest that these conditions won’t continue forever. The big question is, when it will end?

The concern is that price pressures are building. If nothing changes (I believe it will change), then output prices are going to affect inflation:

Inventories have been run down.

The Inventory/Sales ratio is very low, leading some to suggest that the restocking cycle is only just beginning.

However, when you dig into the numbers, inventories are only slightly low. Most of the change in the ratio is because retail sales are so strong:

Note the above data is from March. Given the usual lags, it is likely that wholesale and manufacturing growth is now booming. Which would agree with the purchasing manager indexes that are more timely.

So, the big question is how sustainable the high sales are.

Recent research on shortages during the pandemic shows they came in waves as demand patterns shifted:

My assessment is that changes in demand patterns have driven the shortages, but these have been (generally) quickly resolved.

Some categories, automobiles in particular, haven’t been resolved yet.

Aside: The author’s view is inflation was understated during the pandemic but is now overstated:

Inflation is likely to become an issue when there is not much spare capacity in the economy. Despite the rise in manufacturing demand, capacity utilisation remains well below pre-pandemic levels:

Total consumption spending is now back to trend.

Note that all of the above is talking about manufacturing. This is where we are seeing the price and inflation pressures.

The first reaction of households as unemployment spiked was to save money. Swift government intervention has led to a rapid recovery, and consumers are once again spending. Personal consumption expenditure (which is both services and manufacturing) is now back to trend: 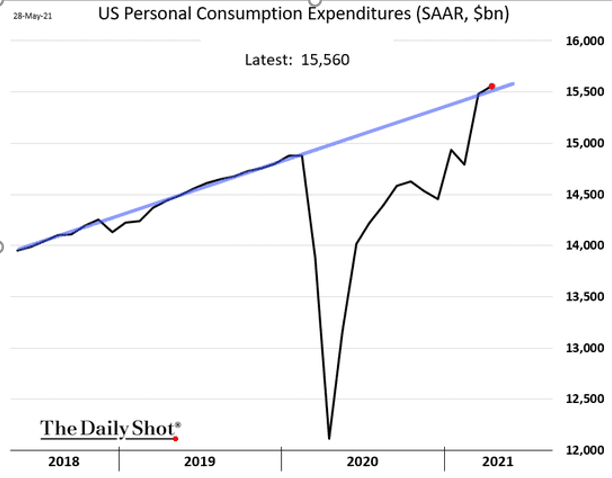 Most of these factors are now fading.

Consumers have been “forced” to spend on goods.

In lockdown, consumers had limited ability to spend money on services as many were closed. Meaning more demand for goods.

As economies gradually re-open, consumers can once again spend money on services like travel or recreation. And early indications are that they are taking that opportunity:

An extraordinary convergence = an inventory supercycle.

All this leads to an inventory super cycle. Demand for goods has been temporarily boosted by:

Meanwhile, supply has been temporarily constrained by:

Now, back to our basic model of an inventory cycle. If we are in a supercycle where demand increases and then returns to trend, it would be a wild ride for manufacturers:

Keep in mind this is just an illustrative model. But sales would boom first (where we are today), followed by a crash, followed by another boom.

The worst-case scenario for anyone expecting inflation would be:

The most important investment questions

How long will the inventory supercycle last?

It is hard to tell. A much larger inventory supercycle occurred after the Second World War and lasted 2-3 years. But it was dramatically bigger than what we are looking at today. At that time, factories had to convert from making tanks to cars, combat fatigues to suits and battleships to skyscrapers.

Today is more about either simply restarting production or re-tooling to cater for different preferences post-pandemic. And we are already several months into the process.

My expectation is a much shorter period. I’m expecting somewhere between another month and six months – but it is hard to tell. We need to keep monitoring the data.

Coming next: How to position your investment portfolio.

To stay updated on the rest of this series, sign up to receive email updates from us via the form below:

The market is oscillating between value and

MB Fund Podcast: How to position your portfolio for the great Inflation head fake

How to position your portfolio for the great inflation head-fake

This is the final in our series of four posts on