As shown in the next chart, new lending for housing was up 50% year-on-year in April despite falling over the month: The average loan size has rocketed higher over the past few months. Rising dwelling prices mean that buyers generally need to borrow more than before: The share of fixed rate mortgage lending has also hit a record high across both owner-occupiers and investors, accounting for around 45% of investor lending in the month: However, fixed rate mortgage lending has pivoted to two-year rates reflecting that they are now cheaper than four-year rates: Finally, lending for alterations and additions remains very strong reflecting that Aussies cannot travel overseas and are instead prioritising spending on the home: Lending for renovations also up.

For the same reason, lending on household goods and cars has also trended up strongly: Lending on big household items has trended up.

The overall shift to mortgage lending makes sense in light of the massive decline in fixed mortgage rates: 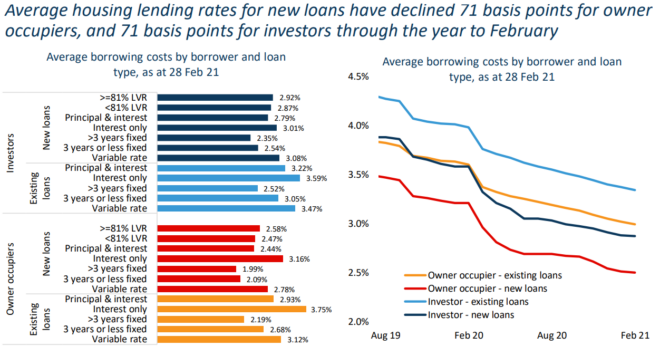 The Reserve Bank’s decision to end the Term Funding Facility (TFF) in June will obviously lift fixed mortgage rates going forward and should shift mortgage demand back to variable rates.