The CCP trade war on Australia is a sight to behold. It has already delivered Australia a reinvigorated ANZUS, and iron ore led income boom, and the very accelerated export decoupling that we desperately needed but couldn’t do owing to CCP’s corruption of local politicians and businesses.

This action by CME was clearly a shot across the bows for Chinese students attending Australian universities.

A new ANU paper now warns that the CCP is likely to further restrict studying in Australia:

The paper, to be released on Wednesday, says education is Australia’s only remaining export to China valued at more than $10bn a year that Beijing can target without doing significant harm to itself.

At the same time, the paper says, action by China to reduce the flow of students will do major damage to Australia for two reasons.

First, Australian universities and other education providers do not have alternative markets available to replace Chinese students.

“Coercion against the sector would significantly impact Australia’s prosperity,” the paper says.

All of this was foreshadowed in 2019 in Salvatore Babones’ seminal paper, The China Student Boom and the Risks It Poses to Australian Universities. This showed that Australian universities hade become dangerously dependent on Chinese students, with concentrations that dwarf similar advanced nations: 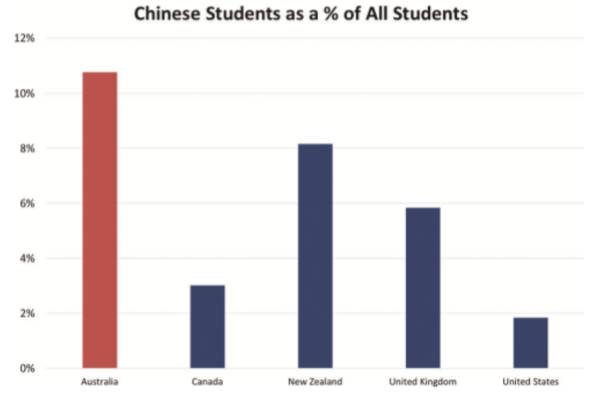 Excessive numbers of Chinese students at our universities perverted the very ethos of knowledge and learning via:

There were also wider negative externalities, such as the crush-loading of infrastructure in the major cities, the crushing of wage growth, and rising property prices and rents.

In short, having too many foreign students, especially Chinese, was a net negative for wider living standards (though that is no fault of the individuals).

In this regard, any action by the CCP to curtail student numbers is another one of the delightful ironies of the great Chinese decoupling that will hopefully continue.

The Australian's Judith Sloan has penned a

The South Australian Government has lodged a plan