My view is that the Australia’s financial regulators will be reluctant to act because the mortgage/property boom is currently being driven by owner-occupiers (especially first home buyers), which makes macro-prudential intervention inherently more difficult than clamping down on speculative investors. Moreover, while new mortgages are being taken out at a record pace, existing mortgages are also being repaid just as quickly. Accordingly, the ratio of mortgage debt-to-income has fallen, according to the ABS: 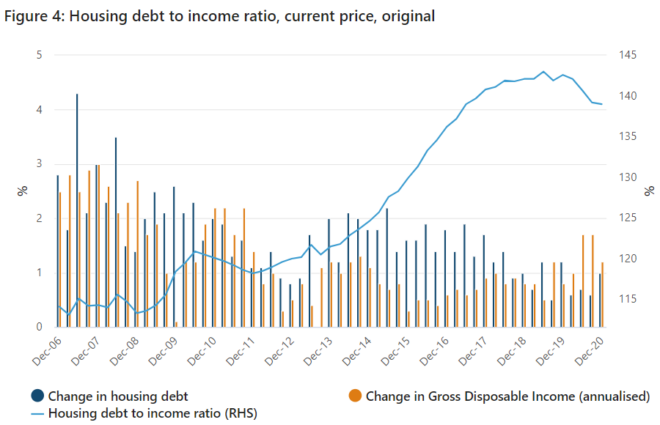 In a similar vein, actual loan repayments (both principal and interest) are tracking at their lowest level in 18 years, according to the Bank for International Settlements: The proportion of household disposable income used for debt repayments is the lowest since 2003.

The Reserve Bank of Australia’s (RBA) Financial Stability Review, which was released on Friday, also shows that households have paid down debt and/or built up substantial liquidity buffers, “with the aggregate household mortgage debt-to-income ratio declining over 2020, and household deposit balances rising relative to household disposable income”: Australian household’s financial position has improved materially over the past year.

The percentage of mortgages in negative equity has also cratered: The share of mortgages in negative equity has cratered as property prices rebounded and household finances improved.

Whereas “the share of high LVR lending increased over the second half of 2020 but remains low by historical standards, while the share of interest-only lending has been little changed at low levels”, according to the RBA: Mortgages taken out at high LVRs or interest-only remain at low levels.

In short, financial stability risks do not appear to have increased sufficiently to warrant Australia’s financial regulators to impose macroprudential tightening, especially given its deleterious implications for FHBs.

However, the situation could change later this year if investors take over and begin to crowd-out FHBs, as occurred in previous cycles.