With Australia’s international border closed, and foreign students blocked from entering Australia, inner-city apartment rents have collapsed, falling by between 16% and 30% in the year to March 2021, according to Domain: 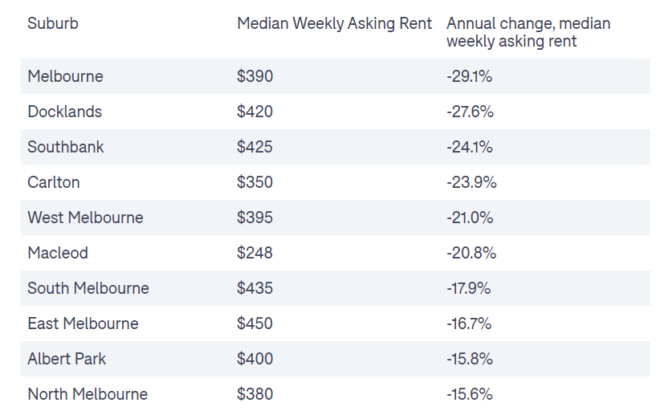 There are 958 words left in this subscriber-only article.

This came off a CBD rental vacancy rate of 11.4%, which was more than double the Melbourne average in March.

Investors are also reportedly dumping their inner-Melbourne apartment holdings en masse, taking losses of up to 30% to 40% in the process.

High-rise approvals across Victoria are already crashing, down 66% from the October 2015 peak, according to the ABS: And according to Charter Keck Cramer, apartment construction will plunge to just 800 units by 2024:

Charter Keck Cramer forecasts that in 2024 Victoria will build just 4 per cent of the number of apartments completed at the sector’s 2016 peak, when 19,400 were built…

The [UDIA] says developers are responding to the collapse in the market for central Melbourne apartments, driven by the closure of international borders to overseas students and tourists, by placing existing projects on hold and putting the brakes on new builds.

These forecasts seem overly bearish to me. While construction will no doubt fall further, the federal government will likely reboot immigration at the earliest possible opportunity, which will result in migrants flooding back into central Melbourne. This, in turn, will bring developers back into the market.

Mortgage brokers run off their feet

RBA: Booming property prices are not our problem

Despite the reduction in mortgage rates to