MB strongly opposed the Morrison Government’s cutting of the JobSeeker unemployment allowance to $44 a day on both equity and economic grounds.

The equity arguments are straightforward. Cutting to JobSeeker to $44 a day would push the income of the unemployed way below the poverty line, as illustrated clearly below by the Grattan Institute: 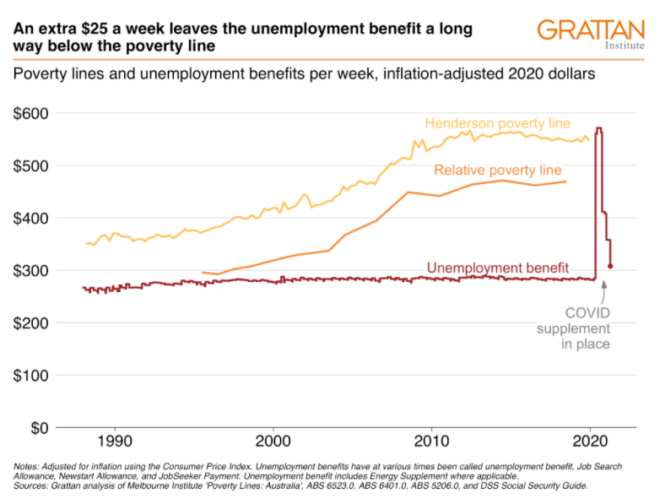 JobSeeker has, once again, fallen far below the poverty line.

There are 1220 words left in this subscriber-only article.

JobSeeker has also fallen far below both the minimum wage and Aged Pension, as illustrated clearly below: JobSeeker is only around 60% of the Aged Pension.

One has to wonder why recipients of the Aged Pension – many of whom are wealthy due to owning their home – receive $61.50 a day when JobSeeker recipients receive only $44 a day, given the latter is typically far more financially vulnerable.

Finally, Australia’s income support payments to the unemployed are the second lowest in the developed world, only beating Greece: The JobSeeker allowance is the second lowest unemployment payment in the developed world.

Based on the above data alone, it is easy to see why MB concluded that JobSeeker is woefully inadequate, and why we argued for it to be pegged to the Aged Pension level (currently $61.50 a day).

The economic case for lifting JobSeeker is also robust. The unemployed typically live hand-to-mouth and are more likely to spend every additional dollar that they receive. This means that almost every extra dollar of income would be spent in the economy, helping to lift growth. This compares to other stimulus measures, such as tax cuts, which are more likely to be saved.

With this background in mind, new modelling from the Australia Institute predicts the changes to JobSeeker will force an additional 155,000 people – including 18,000 children – into poverty:

When the Government introduced the coronavirus supplement in March 2020 it lifted more people out of poverty than any other single government policy. Almost half a million people were lifted out of poverty including 75,000 children aged 0 to 14…

[The cut to JobSeeker] will push a further 155,000 into poverty, meaning the number of people in poverty will have increased by over a million from its low in March 2020, and will be approximately 580,000 more people living in poverty than before the pandemic began.

For years Australian policy makers pretended to care about ‘solving’ poverty. For a brief moment they succeeded accidentally when the government temporarily doubled JobSeeker via the Coronavirus Supplement.

Now the Morrison Government has undone its good work by driving JobSeeker back to the pitiful level of $44 a day, while also imposing crushing ‘mutual obligations’ on the unemployed.