There was broad support for the ECB to increase the pace of its bond purchases, but that support may wane, as the economic situation improves. We continue to see moderately higher Euro-area bond yields ahead.

The monetary policy account from the ECB’s March meeting indicated that there were no strong objections to the central bank’s decision to increase the pace of its bond purchases, though there was more discussion on how much the pace should be increased. In this context, it was argued that a more moderate increase in the pace would better reflect the assessment of more balanced risks to the outlook, also in the light of previous decisions when a similar pace had been chosen but economic conditions had been worse.

While broader financing conditions had remained easy, the increase in longer nominal yields was seen to be driven by increasing term premia and spillovers from US bond yield increases on the back of the expected US fiscal stimulus, as well as rising commodity prices and improved growth prospects globally, which was not supported by the Euro-area outlook. It was further noted that the optimism prevailing in financial markets was not shared by businesses and households.

Risks to the outlook continued to be tilted to the downside, but mostly in the short term, while the risks were more balanced for the medium-term outlook. Further, while the pandemic continued to imply downside risks, the balance of risk was now shifting and becoming more balanced, or possibly even starting to shift to the upside. The most recent US fiscal stimulus was not factored in the ECB’s March forecasts, and was seen as a clear upside risk for both growth and inflation forecasts. It was also noted that real GDP growth had been repeatedly underestimated in successive quarters over the past year, and household consumption could surprise to the upside.

We do not expect the ECB to expand the PEPP envelope further, but do see net asset purchases continuing beyond March 2022, the currently communicated minimum duration of the PEPP, as the Euro-area inflation outlook continues to look muted. We do expect the weekly purchase volumes to fall again later this year, as the economic recovery materializes.

On this note, it was emphasized that all members joined a broad consensus around the proposal put forward by Mr Lane, on the understanding that the total PEPP envelope was not being called into question in the current conditions and that the pace of purchases could be reduced in the future.

The ECB will revisit the pace of the bond purchases again in June, unless a pressing need arises to make changes earlier. We see more room for gradually higher Euro-area bond yields also going forward, driven by higher US yields and an improving Euro-area economic situation. The significantly higher pace of bond purchases, which appears to mean net PEPP purchases of around EUR 20bn a week, is unlikely to be enough to prevent yields from rising at all, while the ECB seems unwilling to increase the pace further, unless yields rise rapidly and materially.

ECB managed to stop the increase in longer rates for now 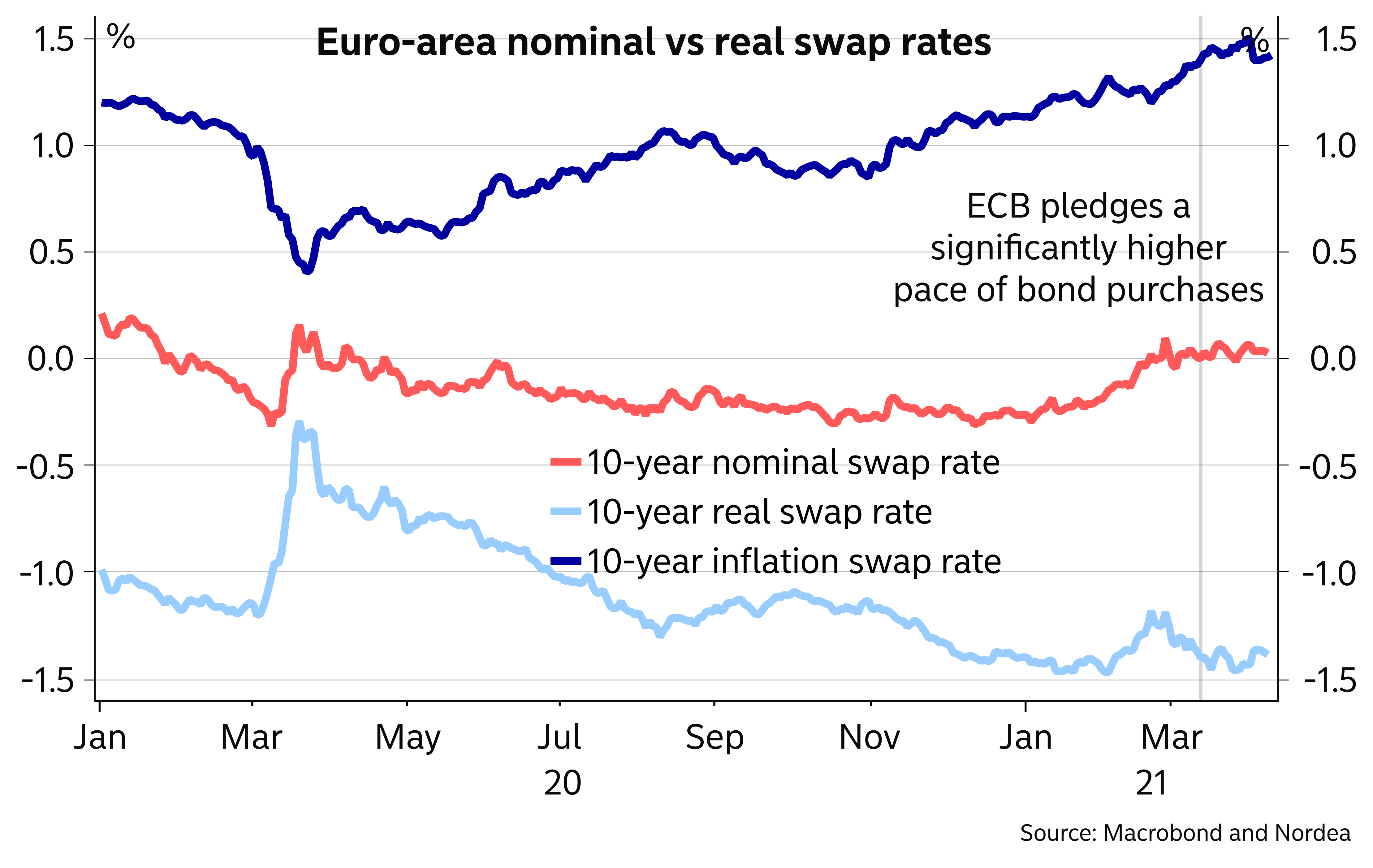 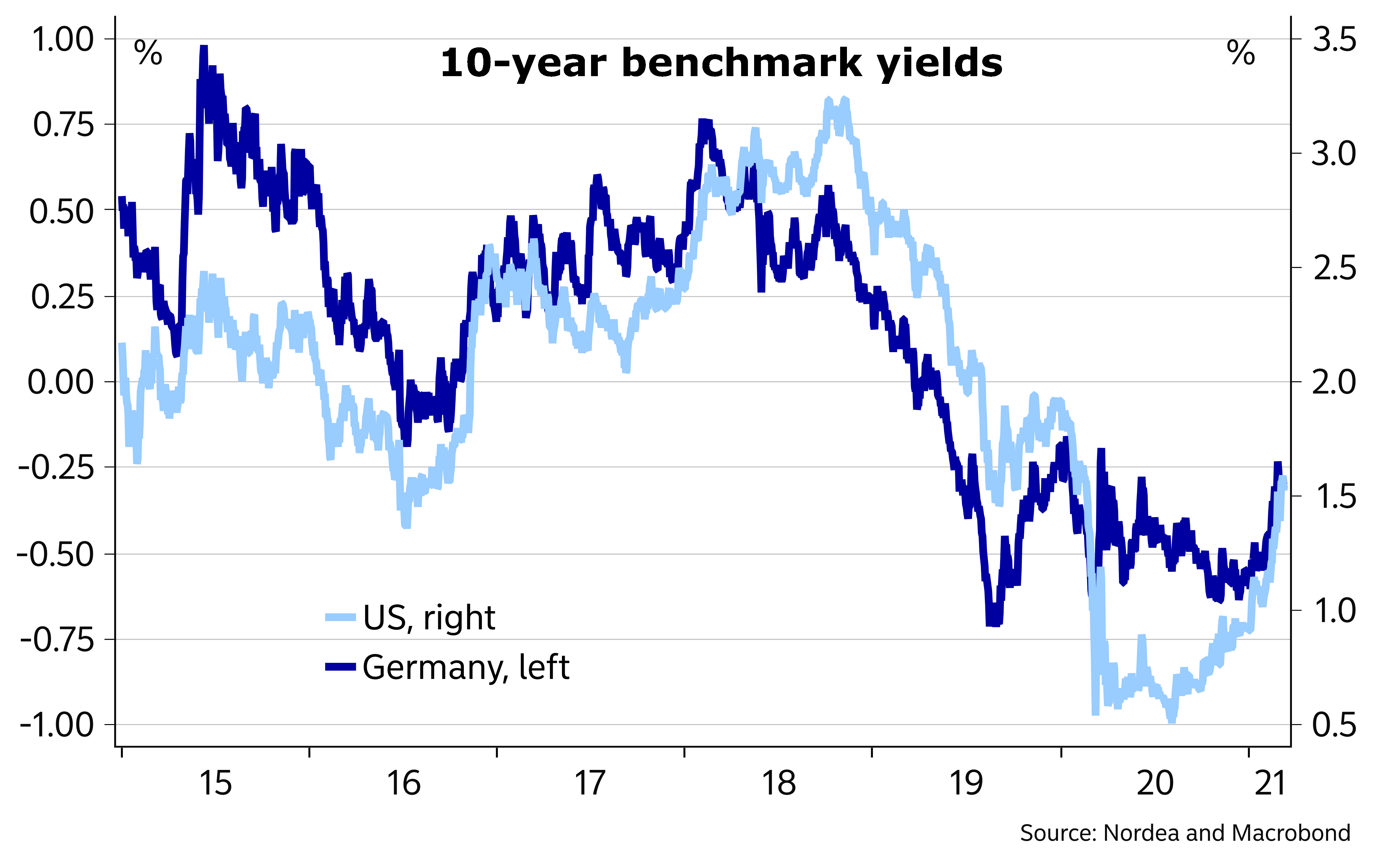 Note the German versus US scale on the yield chart. Why anybody would want to own EUR defeats me.

That said, there is a risk here for DXY bull market thesis. It is this, via Goldman:

In a fresh Global Views, “Converging Higher,” Jan Hatzius highlights how growth in Europe is likely to accelerate similar to what we’re seeing in the US – once the region gets over the ongoing virus wave. Jari Stehn sounds a similarly positive tone in “Euro area: Rising Confidence in the Rebound.” Notably, daily new cases are now starting to decline, vaccine distribution is picking up, and business sentiment surveys are surprisingly encouraging. For the four quarters 2Q21 through 1Q22, we forecast Euro area GDP growth of 7.0%, similar to the 7.4% surge we are expecting over the same period in the US. And when the focus shifts to European-driven demand, the CEE-3 currencies and the Euro itself tend to outperform the most writes Michael Cahill in “Readying for a EuropeanRebound.”

I see this more as more a timing than fundamental issue. If the European rebound arrives as the US falls briefly off its fiscal cliff and before China slows, say, at the end of this year, then we could see a run higher in EUR and hit to DXY. The base case is that further into 2022, the next round of Biden stimulus adds another leg to US growth as Europe fades with China.  But there may be scope for a decent corrective rally in DXY in this mix.

The recent lift in bond yields driven by US

Treasurer Josh Frydenberg has committed the

Going into the northern hemisphere winter without