Westpac CEO Peter King believes that Australia has a housing supply problem, which he claims is exacerbating price growth and pricing young people out of the market:

“In relation to what’s driving housing prices, it’s from my perspective supply and demand so one of the ratios we look at quite a lot is new listings to sales and it’s still out of whack (more sales than new listings)”…

“I don’t think bank debt is a driver of the housing prices, I think it’s a fundamental supply demand issue”.

Accordingly, Peter King has called for policy makers to urgently address the supply issue, rather than opting for regulatory lending restrictions or tax reforms like negative gearing:

“I’d lean to more supply, actually… let’s look at how we can create supply”…

Australia does have an issue with ‘market supply’, which is the number of homes listed for sale. This has collapsed to record lows, according to CoreLogic, running around 30% below the five year average: Total for sale listings have collapsed to around 70% of ‘normal’ levels.

This comes against a big pick-up in buyer demand, which has pushed house sales to recent historical highs: 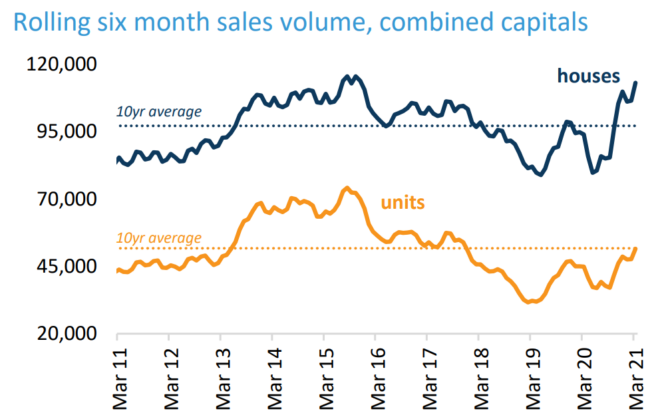 Therefore, there is definitely a large undersupply of homes listed for sale relative to demand, which is helping to push prices higher.

On the other hand, actual fundamental supply is running strong. Dwelling construction is booming on the back of HomeBuilder at the same time as actual household formation has collapsed via the loss of migrants. Accordingly, the National Housing Finance & Investment Corporation (NHFIC) has forecast a massive structural oversupply of homes in 2021 and 2022: Australia will build far more homes than are needed, according to NHFIC.

The question is: which supply issue does Peter King wish policy makers to solve?

Encouraging greater levels of new home construction won’t solve the lack of for sale listings, but will add to the structural oversupply of homes being built. It won’t fix the problem that he is concerned about.

The depressing reality of 'tiny homes'

Over the past few years we have witnessed housing

Why macroprudential mortgage curbs are harder this time around

Several commentators have questioned the efficacy

CoreLogic has released its preliminary auction