CoreLogic has released its Quarterly Auction Market Review, which reveals that Australia’s combined capital city auction clearance rate was the strongest on record in the March quarter of 2021:

Eliza Owen, CoreLogic’s Head of Research Australia, says “The strength in auction clearance rates through the March quarter corroborate the rise in demand seen across the market more broadly, as dwelling values in the combined capital cities shot up 5.6% in the quarter. This was illustrated through the month of March, when the combined capital cities saw a record high clearance rate of 83.1%, against 3,840 scheduled auctions (the highest volume since March 2018).”

There are 921 words left in this subscriber-only article.

As regular readers know, the auction clearance rate has historically been a strong leading indicator of price growth across Sydney and Melbourne. 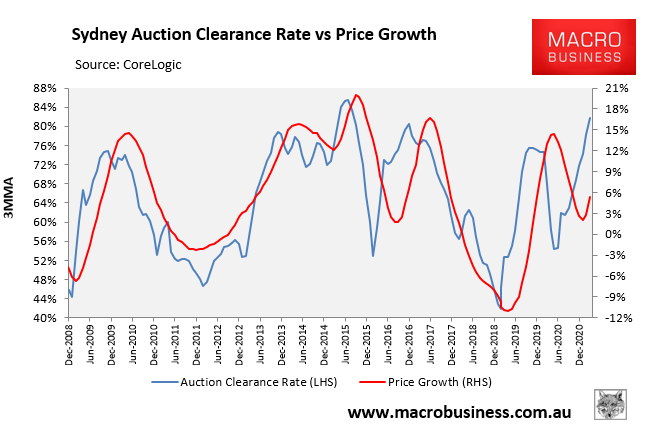 It is a similar story for Melbourne, albeit a little less bullish for prices: We’ll know that Sydney’s and Melbourne’s property price appreciation is about to slow when auction clearances fall.