Yesterday’s employment report from the Australian Bureau of Statistics (ABS) revealed that the number of jobs across the Australian economy has fully recovered from COVID, rising 0.6% in the year to March: There are 1140 words left in this subscriber-only article. The youth jobs recovery badly lags the rest of the labour market. Youth part-time jobs have recovered, whereas full-time jobs remain in the gutter.

Despite these job losses, the youth unemployment rate declined to 11.8% in March, which is only a whisker above the pre-COVID level (11.6%): 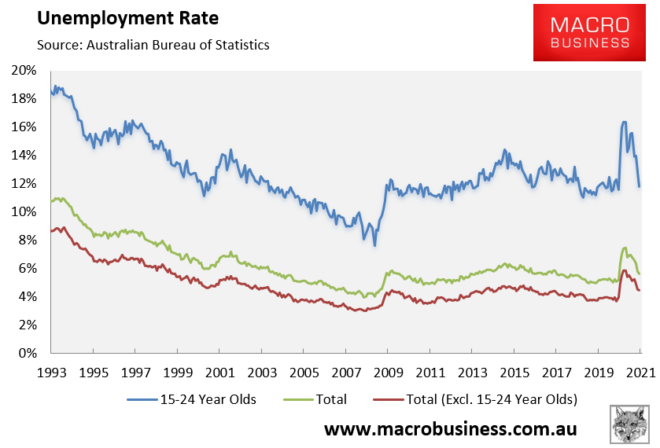 The youth unemployment rate has almost recovered to its pre-COVID level.

This came despite the youth participation rate running 0.9% above its March 2020 level: The youth participation rate is running 0.9% above its pre-COVID level.

The reason why the unemployment rate has fallen despite annual job losses and rising participation is because the youth population fell by 94,800 (2.9%) in the year to March 2021 due to the loss of temporary migrants.

Basically, the reduction in young migrant workers has more than offset the loss of youth jobs, resulting in better employment opportunities for Australian youth.

Next up, wage growth.