Late last year, university chancellors ordered a review into its peak lobby group – Universities Australia (UA) – because of its lack of success in influencing the Morrison Government.

It was revealed later that UA did not believe that the Coalition would win the 2019 federal election and, therefore, had focused all of its lobbying efforts on Labor:

“There was no plan B,” said one of the participants… There was also no “blue book”, the document [listing the policies they want to see implemented] which UA would have been expected to give to the incoming government.

The starting point is to consider the core purposes of enrolling international students in Australian institutions.

Unfortunately, it looks to many like some institutions think there is just one purpose – to bring in dollars. This is important, as international students now account for a quarter of university revenues. But this financial objective must be balanced…

Australia can and should do better in this respect.

The truth of the matter is that Australia’s tertiary education system has been corrupted, overly commercialised and centred on maximising revenue and fattening administrator pay packets over teaching and research quality. It has shifted away from higher learning to higher earning.

Wage theft is widespread across universities. Front-line staff have been slashed and entry and teaching standards trashed, with the ratio of students to academic staff ballooning during the long international student boom: 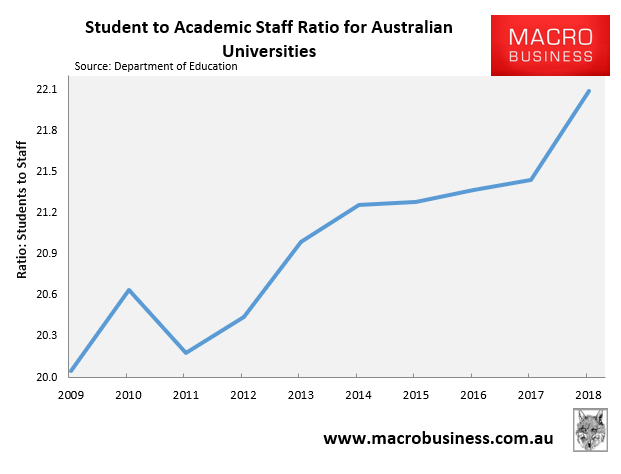 The ratio of students to academic staff at Australia’s universities ballooned amid the international student boom.

That said, while Tudge’s critique is correct, he must also acknowledge that the federal government helped create the problems by providing the world’s most generous student visa working rights (i.e. two to four years) and opportunities for permanent residency.

The result was that international students were not attracted to Australia for the quality of its education, but rather because studying at an Australian educational institution was an inconvenient box that needed to be ticked gain full work rights and permanent residency.

If Tudge was truly interested in reforming the international education system to maximise benefits for Australians, then he would explicitly target a smaller intake of higher quality students via:

Reforms along these lines would provide significant net benefits to Australia, including: 1) improving student quality; 2) increasing export revenue per student; 3) lowering enrolment numbers to levels more in line with international norms; and 4) raising teaching standards and the experience for domestic students.

Tudge would also encourage universities to scale-up their online course offerings to provide Australian education to students in their own country, as well as establish campuses overseas. This would generate genuine education exports, rather than people imports.

Obviously, the education lobby would fight tooth and nail against such reforms. They know that Australian education is not what motivates international students to enroll. It is the lure of access to our job market, permanent residency and, in due course, family reunion migration.

Our tertiary education system is merely little more than an immigration conduit.

Good news all round as foreign student numbers collapse

Data from the federal government, reported in The

For years, MB has argued that the higher