CoreLogic has released its New Zealand dwelling value results for February, which shows that price momentum continued to gather steam.

Dwelling values nationally surged by 2.6% over February to be up a whopping 7.6% over the quarter and by 14.5% year-on-year.

As shown in the next chart, quarterly value growth is running at its hottest pace since 2005, whereas annual price growth is the strongest since the 12 months to October 2016 (14.8%): The price boom is broad-based with New Zealand dwelling values rising strongly across all major markets: New Zealand dwelling values are rising strongly across every major market, according to CoreLogic.

Last week, the Reserve Bank of New Zealand (RBNZ) forecast that annual New Zealand dwelling value growth will peak at 22% in 2021, which would be the strongest growth since 2003: 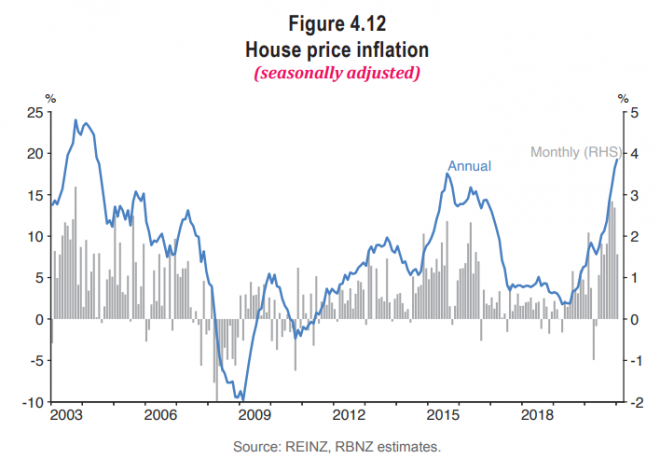 New Zealand house price inflation is forecast by the RBNZ to peak at 22% in 2022.

However, the RBNZ expects price growth to moderate over the two years to 2023, reflecting the reintroduction of loan-to-value-ratio restrictions and the delayed impact from lower net overseas migration:

The assumed slowdown reflects a range of factors, including the fading impact of interest rate declines, low net migration over most of 2020 and 2021, elevated unemployment compared to before the pandemic, and the reintroduction of LVR restrictions.

With the loan-to-value ratio (LVR) restrictions officially back in place this week (1 March) and further tightening for investors from 1 May, it’s likely that the current rate of growth will ease over the coming months.

The RBNZ already has the LVR restrictions in its macro-prudential ‘toolkit’, so these could be further modified to help achieve the Government’s objectives, and the introduction of debt-to-income limits for investors could also be added to their toolkit later in the year.

That said, New Zealand Prime Minister, Jacinda Ardern, recently stated that she would like to see house price growth moderate, not for prices to fall, given housing is the nation’s biggest asset class.

Therefore, you could expect the government and RBNZ to quickly reverse track if its macro-prudential tools are too successful in slowing momentum.