Alan Kohler has published a detailed article at The ABC decrying the impact that record low deposit rates is having on retirees, claiming that “retirees are collateral damage” in the Reserve Bank of Australia’s (RBA) war against low inflation:

I think retirees are mostly just collateral damage in the war against low inflation. They happen to be in the way of the RBA’s efforts to get borrowers to spend and/or borrow more, the idea being that there are fewer retirees being impoverished and spending less than there are borrowers spending more…

RBA Governor Philip Lowe says interest rates are likely to stay where they are until 2024; it looks like being a long winter.

Superficially, Kohler has a good point. The RBA’s indicator deposit rates have fallen to record lows. 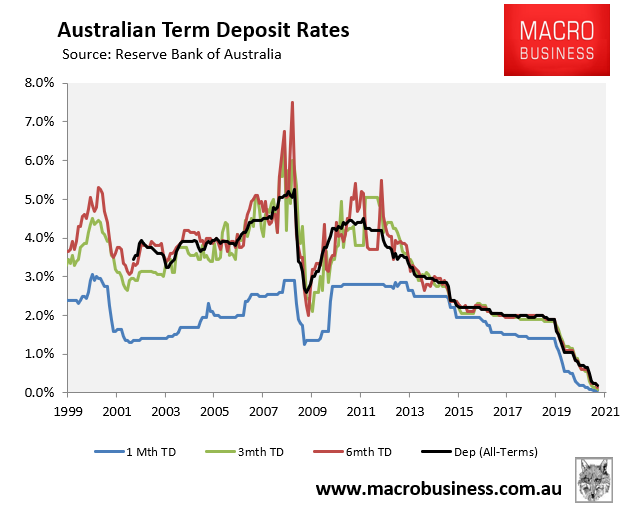 At the longer end of the curve, rates on 1-year and 3-year term deposits fetched only 0.30% and 0.35% respectively in February: Longer-term deposit rates remained at a record low in February 2021.

Whereas the average rate across all deposit terms was a record low 0.20% in February 2020, a huge change from the 5.20% earned when the Global Financial Crisis hit in June 2008.

So yes, savers are being adversely impacted by record low rates, and most of these are retirees. But the equation is not that simple.

Retirees also have by far the highest home ownership rates in the nation at over 80%, according to the latest Census: Thus, retirees will have enjoyed large gains in wealth (not to mention shares) from the latest surge in the property (and share) market. This wealth can easily be ‘cashed-in’ via the Pension Loan Scheme – the government’s reverse mortgage program.

We should also remember that Australians aged 65 and over have enjoyed by far the biggest wealth gains over recent decades, according to the Household, Income and Labour Dynamics in Australia (HILDA) survey:

In short, while Australia’s retirees may be disadvantaged by low deposit rates, they are gaining elsewhere and remain the luckiest cohort in Australia.