Paul Keating has appeared on ABC 7.30 Report’s four part special, The Future of Retirement, where he spun more lies about Australia’s superannuation system in a bid to pressure the federal government into proceeding with the legislated rise in the superannuation guarantee (SG) to 12%.

Paul Keating again claimed that Australians won’t get a real wage increase without the 2.5% rise in the SG:

Keating also rebuked the notion that increasing the SG would come at the expense of wage increases:

“On their reasoning, we should have seen real wage increases”…

“It’s been [a] zero real wage increase for eight years.”

Blind Freddy knows that businesses are only concerned with their total employee cost. They don’t care what share of wages goes to employees, what share is paid to the ATO in tax, or what share is paid into superannuation accounts. The overall cost to the employer is the same regardless.

Thus, if the SG is increased, all it means is that workers will receive less via their take-home pay with the balance going into their superannuation account. Paul Keating explicitly acknowledged this relationship in 2007:

“The cost of superannuation was never borne by employers. It was absorbed into the overall wage cost.”

So why is Paul Keating arguing the opposite now?

Of course, the superannuation industry loves the idea of lifting the SG, since it means having more funds under management to skim fees from and the ability to earn fatter paychecks. Hence, the industry’s incessant lobbying to lift the SG. Follow the money.

Nor does Paul Keating’s claim that “if they don’t get the 2.5 per cent super, they get nothing” make any sense.

While real inflation-adjusted wage growth has been fairly flat, nominal wages in Australia have grown by 18% since 2012, averaging 2.2% annual growth: 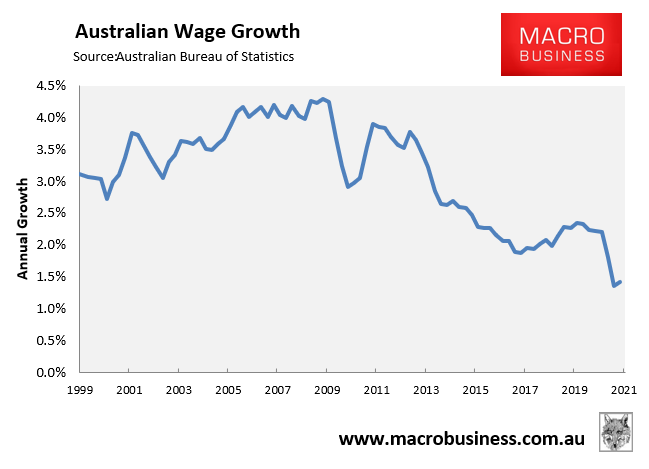 Australian wages have grown by around 2.2% per annum since 2012.

Even in the 2020 calendar year, amid the sharpest economic downturn since the Great Depression, Australian wages still grew by 1.4%.

Therefore, there remains plenty of room for wage growth to slow in the event that the SG is increased to 12%.

Paul Keating is broadly correct when he says that “since 2013, there’s been a 10 per cent increase in labour productivity … [none] of it went to wages”. This is illustrated by the collapse in wages’ share of national income (see below chart).

However, the share of national income going to workers has been falling for decades, including throughout the introduction of the SG and subsequent increases. It is not some new phenomenon. Workers’ share of national income has been falling for decades, including throughout the implementation of Australia’s compulsory superannuation system.

Why would Australian companies absorb the cost of increasing the SG when workers’ share of national income, and by extension their bargaining power, is so low? They wouldn’t. The cost of the SG would simply be passed onto workers via lower take-home wages, as has been the case in the past.

Finally, Paul Keating claims that people cannot rely on the Aged Pension to provide for their retirement:

“Can we guarantee that the pension will even remain as generous as it is today? That’s the big question. That’s why nothing beats self-provision.

“What superannuation is about is personal empowerment … you shouldn’t be forced to eat your own home.”

Paul Keating has things back-to-front. The reason why the federal government cannot afford to lift the Aged Pension is because the superannuation system is so poorly targeted towards the wealthy and costs the federal budget way more than it saves in pension costs: More than $40 billion of revenue is lost through superannuation concessions each year – a figure that will balloon if the SG is lifted to 12%. It would be cheaper and more equitable to scrap the compulsory superannuation system altogether and divert the savings into boosting the Aged Pension.

In summary, if Paul Keating had any integrity and genuinely cared for the working class, he would oppose lifting the SG to 12% and support a complete overhaul of the system.

Disclosure: The MB super fund stands to gain from the SG increase going ahead. Nevertheless, we oppose the increase for the afore mentioned reasons.