On Friday at 8:30 AM ET, the BLS will release the employment report for October. The consensus is for 600 thousand jobs added, and for the unemployment rate to decrease to 7.6%.

• ADP Report: The ADP employment report showed a gain of 365,000 private sector jobs, well below the consensus estimate of 650 thousand jobs.  The ADP report hasn’t been very useful in predicting the BLS report, but this suggests the BLS report could be weaker than expected.

• Homebase, Kronos/UKG: There are other indicators that analysts are looking at – like Homebase hours worked and Kronos (see Ernie Tedeschi comments).

In 2019, retailers hired 161,000 seasonal employees (NSA) in October. This translated to a gain of 22,000 SA. Brick and Mortar retailers could be more cautious this year, and retail might decline SA in October.

There could even be a larger impact in November. In 2019, retailers hired 432,000 temporary employees NSA in November, and this translated to a loss of 14,000 jobs SA. This will be something to watch. 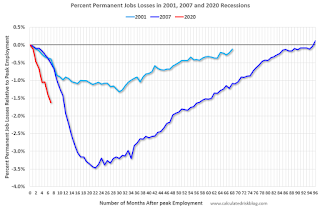 This graph shows permanent job losers as a percent of the pre-recession peak in employment through the September report.

This data is only available back to 1994, so there is only data for three recessions. In September, the number of permanent job losers increased to 3.756 million from 3.411 million in August.

• Merrill Lynch forecast: “The October jobs report will likely reveal a moderation in nonfarm payroll growth to 625k, down from 661k in September. Census workers will contribute a notable drag – excluding government, we expect solid private payroll growth of 800k. The unemployment rate will likely improve to 7.6% from 7.9% in September.”

• Conclusion: The employment related data has been all over the place, but most of the indicators suggest a weaker report in October than in September. My guess is the report will be lower than the consensus.

Over the weekend we saw another 1.9tr stimulus

What do consumers buy post-vaccination? Travel

BofA with a terrific little insight into what

US flogs the virus

BofA with the lastest charts: The latest

Readers will know that we have a very bullish