DXY was up last night:

Australian dollar got belted after the RBA awakening:

As the junk siren went off again:

Westpac has the data:

Sentiment soured in Europe on daily Covid cases in Germany hitting another record high of 7,174, Italy also rising (8,804, prior 7,332), and Spain (6,603 vs 5,104). UK daily cases remained uncomfortably high at 18,890 (19,724 yesterday). There were increased restrictions in the UK (London and areas of Southern England raised to higher tier 2 alert), and Germany said that it would start to restrict internal movement and travel. EC President Von der Leyen had to leave the EC Summit and self-isolate due to members of her staff succumbing to COVID-19.

New Zealand: The partial return to lockdown in August brought down the manufacturing PMI to 50.7. Ahead, business conditions should improve as restrictions ease.

The NZ General Election will be held on Saturday, with polls to close at 7pm NZ time.

The European Summit held in Brussels will continue, with COVID-19 and Brexit to be discussed.

The story now is the virus is back bigly: I can’t see either Europe or the US handling this well at this time. So the base case is that the entire North Atlantic developed economy recovery stalls sharply over the next three months.

What robot markets do with that is anybody’s guess. But while the uncertainty lasts it will pressure DXY up and AUD down. Nomura’s robot diviners see danger ahead:

…there is simply so much convexity now just a one day out from expiry in these Calls – similar to when the stocks blew through their strikes to the upside only a few days earlier and forced mass Delta buying to stay hedged – that we see the opposite accelerant flow on the way down, with the Delta on these now 1-day options having reversed those prior moves and utterly collapsing (looking much lower probability to strike), thus leaving the Dealer overhedged “long,” which means collectively / potentially ~$Billions of dollars for SALE intraday the lower we go across whatever the preferred hedging mix in these market leader Tech stocks (AMZN being the largest position – particularly the 8k Oct 3420 Calls, stock now 3289 last preopen after having traded up to $3496 just Monday!), QQQs or Nasdaq (even SPX) futures.

…then synchronizing with 2) a massive “Gamma drop-off” coming out of this expiration (QQQ still showing ~60% of $Gamma dropping after Friday, SPX / SPY down slightly but still ~29% dropping-off). 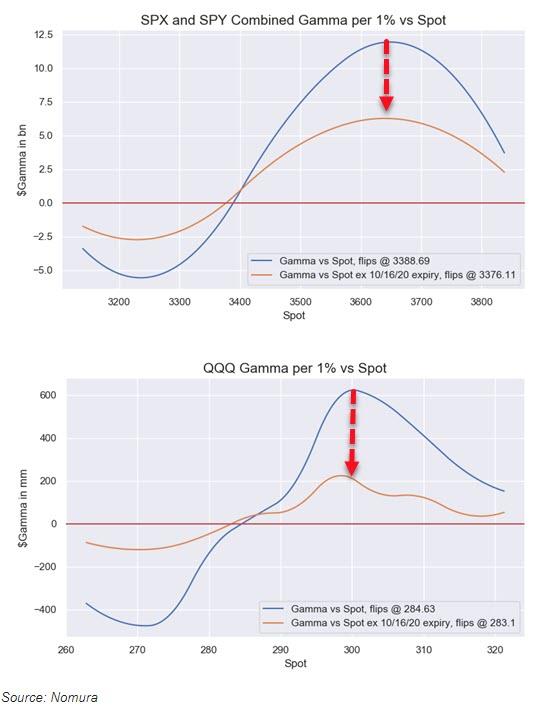 …things would get messy in index on a move down through 3400 (3389 to be exact) in SPX and / or through 284.63 in QQQs, where we estimate that the current index “long Gamma” position for Dealers flips “short”.

Lower lows for the Australian dollar in the short term – into the US election, more RBA and the virus third wave – is a good bet.

The latest ANZ/Property Council of Australia

Morrison's shocker: One third of youth labour short of work

Wall Street has been in retreat for three