Melbourne-based NAB chief economist Alan Oster has been in the profession for more than 40 years and he’s seen a fair few economic crises in his time, but nothing compares to this.

“In terms of sharpness in the decline in activity, this makes the recessions in the 80s and 90s look like child’s play,” Mr Oster says.

“Unemployment did get to 11 per cent in the 1990s recession, but it took two years to get there.”

National Australia Bank will update its forecasts next week after the results of its latest business conditions survey.

But Mr Oster already knows what to expect.

“I would expect conditions, or certainly confidence, to go deeply south compared to where it was,” he says.

It’s generally accepted that Australia recorded two successive quarters of negative growth in the March and June quarters, even though the latest National Accounts numbers won’t be unveiled for another month to confirm it.

But now, NAB’s number crunchers aren’t sure the recession will end at June.

Policymakers, big business leaders and small business owners who lived through the last recession warn that downturns have a nasty habit of lingering.

NAB had already downgraded its September quarter GDP forecast from 3 per cent growth to 1 per cent after the Federal Government’s July Budget update.

It now thinks the blow to Victoria, which accounts for nearly a quarter of Australia’s GDP, could be between 10 and 15 per cent in the three months to September.

The likelihood of that prolonging the national recession is 50-50, according to Mr Oster.

“A bigger hit to the construction sector in Victoria could prolong the recession. We could have three quarters of negative growth,” he warns.

“That is not our current forecast, but it could well and truly happen.”

Let’s give this the name it deserves: a depression.

It is far worse than it needs to be. The stimulus is woefully inadequate. The Morrison Government has refused to pay for anything new beyond pay for the infected to stay home, only after they’ve run out of all other options. The RBA has put the cue in rack.

Victorians can feel rightly aggrieved for being hung out to dry.

But, they will also, hopefully, learn a lesson. MB has been warning of Victoria’s vulnerability to this kind of offshore shock for a long time. No other state in Australia went so hard at the de-industrialisation, population ponzi, bullshit jobs economic model.

Time and again we’ve highlighted the idiocy of Ponzi Pallas and Dan Andrews as they sold everything that wasn’t bolted down to Chinese students for gains in education, construction, infrastructure and retail: 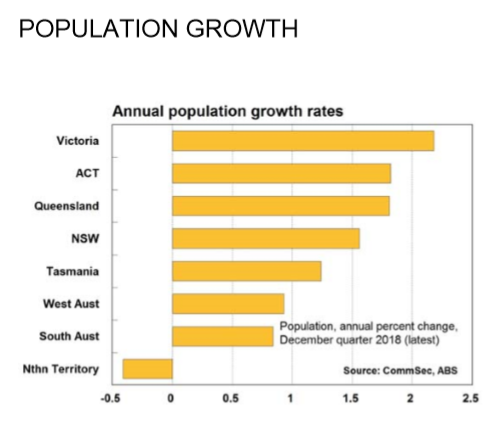 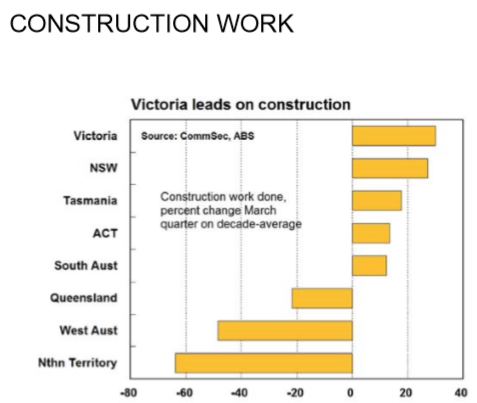 Anyone disputing these facts only needs to look at the below chart showing the stalling of export growth amid the sharply deteriorating trade balance:

Which has driven a gigantic trade deficit:

As a result of this rat wheel economy, median income in Victoria badly lagged the national average: 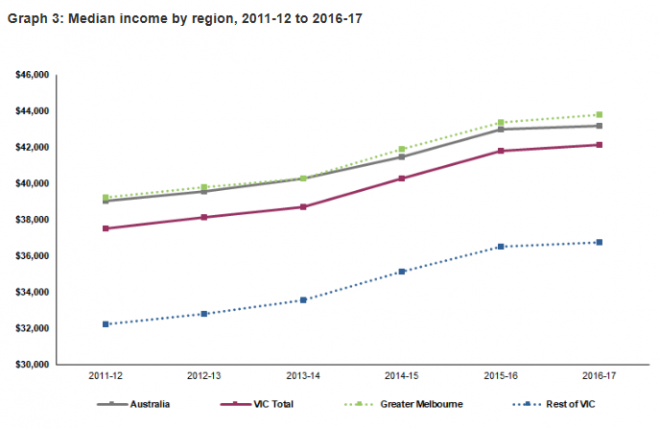 With Victoria having the second lowest median income on the mainland – only just beating out lowly Adelaide:

From highest to lowest, median incomes are as follows across Australia’s jurisdictions:

The story is similar at the capital city level, with Melbourne also having the second lowest median incomes on the mainland, only beating lowly Adelaide:

Again, from highest to lowest here are the median incomes across the capitals:

The annual state accounts from the ABS have painted an even worse picture, with Victoria’s household income growth badly lagging behind the other jurisdictions:

And Victoria having the lowest gross household disposable income in the nation, even lagging behind Tasmania:

Victoria’s population ponzi economy failed to lift living standards for the incumbent population. In addition to crushing incomes, Melbourne’s infrastructure deficit, along with congestion, housing and overall liveability is worsened each year as more and more people flood into the city and push against bottlenecks amid woeful planning.

Now comes the final insult. The ponzi-economy has not only made Victorians poorer, it also made them more vulnerable to an external shock than any other state in Australia. That it took the shape of the virus is irrelevant. All economies that develop external imbalances of this scale eventually face a reckoning because the world is a dangerous place.

We warned repeatedly for this very reason. We did not know the nature of the shock but the vulnerability was clear all along. The bigger the imbalance, the bigger the adjustment.

I feel for my fellow Victorians. We do not deserve the punitive policy treatment coming from Canberra and Martin Place. But an honest assessment must also include the admission that we did it to ourselves.

Around 15% of jobs have been lost in small and

Cracks are appearing within the Victorian

Earlier this week, we reported how the Morrison