An ounce of prevention is worth a pound of cure. Coronavirus has shown this to be accurate, both in managing the virus and in managing investment portfolios over the year to 30 June. At the end of January, we inoculated our portfolios against coronavirus. Our best performing fund in an absolute sense was our international fund up 12.5% over the year. Our tactical growth and tactical income funds finished first vs Morningstar peers.  As a result, we topped the investment charts for 2020: 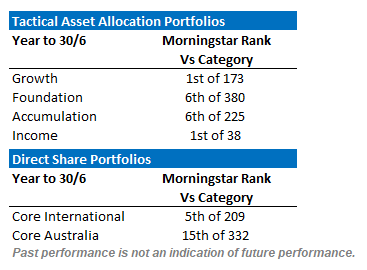 Results were the same when comparing our portfolios for superannuation clients to Chant West’s preliminary numbers with our funds beating all of the superannuation funds that Chant West assess:

And our direct equity portfolios also significantly outperformed their benchmarks:

“Past performance is not an indication of future performance.” This is a statement that ASIC requires us to make due to the volatility of the superannuation and investment industry. It is imperative for investors to consider this when assessing the longterm performance of investment portfolios. In line with this philosophy, the MB Fund focuses on low-risk portfolios. Our objective is to hang with the market on the way up and then outperform by protecting capital when it falls. We only invest in large blue-chip stocks, Australian government bonds, and cash. Our stock portfolios are very diversified, invested in a mix of quality and growth. For example, our international fund typically holds almost 3x more stocks that the Magellan fund.

In cricket/baseball analogy terms, we are trying to hit singles (consistently) and not get out. We are not trying to hit the ball out of the park every innings. Succeeding in the first but striking out for a duck in the next (if you’ll pardon the mixed metaphor). Ironically, one of the key benefits of this approach is that there will be times (such as this year) that the strategy hits the ball out of the park.

Our role is to examine the bigger picture to ensure that our investor’s money is safe and achieves significant growth in the longer term. In an economic climate as volatile as the one we’ve seen in recent years, that is likely to continue for the foreseeable future, this function shifts from sensible to crucial.

Simply, we are aiming for more consistent outperformance without taking undue risks.  The MB Fund looks to deliver high quality, lower risk portfolios that optimize downside protection for your superannuation or investments.

The economic and virus progress has been largely as we expected so our asset allocation and superannuation portfolios remain conservatively positioned.

In the direct holding stock portfolios, our virus-sensitive positions have driven major outperformance. Since the crash we found value in commodities. First oil, then iron ore, and now gold miners. We remain very wary of banks.

However, the economy and the stock markets have disconnected. The stock market is at valuations that discount no risk. Indeed, they are now the risk.

It is October 1999. The NASDAQ index (measuring a group of US tech stocks) is at 2,600 on close to record valuations. You decide it is a bubble, and make the decision to sell most of your stocks and wait for sanity to return.

The bubble pops in six months and is below your exit price within a year. Other investors have halved their capital within three years. Your assessment is vindicated.

However, before it fell to 1,250 the NASDAQ first doubled.

Were you right or wrong to sell?

An investor will say you were right, you assessed the situation, made a call, and were eventually vindicated. You can’t beat yourself up when markets become irrational.

A trader would say that you made the wrong decisions. You could have doubled your money if you held on for longer. There was plenty of time to sell.

We side with the investors. For us, repeatable returns are the goal.  Our current positioning reflects the likelihood that markets are in a bubble, but acknowledges there is a possibility “this time is different”.

The early actions of central banks and governments have dodged an economic catastrophe but the threat of the virus impact remains extraordinary. And to be even clearer, it “ain’t just the virus”.

The timing of the pandemic is just as important. We were already watching for what could bring an end to one of the longest economic expansions ever. Debt levels had increased dramatically, regulations around lending were lax, tax cuts had extended the boom, and so the economy was already vulnerable. It is the combination of the virus plus an already vulnerable economy that creates the risk.

There is an alternative possibility: that markets are now entirely dependent on central bank support, so economics and fundamentals no longer matter.

We have a checklist of a dozen decisions that governments and central banks can make that will eventually suspend capitalism. A few of the items have already been checked off the list. The more that get implemented, the closer we get to a genuinely new paradigm. But, we do not believe this to be a likely outcome. The steps taken must become increasingly radical: effectively central banks and governments bailing out and propping up most failing businesses, turning the world’s capital markets into a herd of state-owned entities that will ‘kill the village in order the save it’.

What will pop the bubble?

All bubbles are built on a grain of truth. The truth here is that central banks and governments “have your back” and will buy anything and everything to keep the stock market high.

It is likely that central banks will continue to bail out corporate debt markets where they can. But already we are seeing cracks with Hertz and several airlines filing for bankruptcy.

Wirecard, one of the largest companies in Europe has collapsed, all but confirming massive fraud. And there will be more. Economic downturns always expose scams.

Keep in mind also that small and medium businesses make up 50-70% of most economies. They don’t have traded debt that central banks can buy. There is significant risk in this area as virus waves shut down economic segments and government support is withdrawn.

The irrationality of the earnings is another possible pin. A Joe Biden win in the US election is another, with the specter of higher taxes and wages damaging profits.

It may be something altogether unpredictable.

How much bigger can this bubble get?

Bubbles rely on new money to keep them inflated or growing. So, as long as new money is flowing, the stock market bubble can keep growing.

There are four primary sources bubbles rely on for new money:

The 2001 US tech boom took about two years to play out, but was a different type of bubble. The China 2015 Bubble took four months before economic reality sunk in. We suspect markets are on a trajectory closer to China’s 2015 bubble than the tech boom.

The charts below show some of the risk characteristics of our international fund over the 12 months:

Our portfolios “went to ground” before the crisis hit, selling stocks and investing in bonds/cash/international currencies. All of our funds have a low weight to shares. This is a significant deviation and one that we have not undertaken lightly.

The focus for investors should be on where earnings can get back to over the next few years. I’m struggling to find a credible earnings scenario that justifies paying current stock prices.

The best bearish argument? The virus remains entirely out-of-control and history teaches us that pandemics often come in waves. The virus trajectory will determine global growth and profits.

The best bullish argument? Capitalism is dead, therefore buy equities. I don’t think central banks and governments are planning on suspending capitalism. So for me, loading up on equities at close to record valuations going into an immense economic unknown is pure speculation.

We are patient yet poised to add risk when and where opportunity strikes in what remains a historically high-risk environment.

MB Fund Podcast: A trader's guide to 2021, with Patrick Ceresna