Via the OECD today:

Trade conflict, weak business investment and persistent political uncertainty are weighing on the world economy and raising the risk of long-term stagnation, according to the OECD’s latest Economic Outlook.

Bold action is needed to address both the high levels of uncertainty facing businesses as well as the fundamental changes taking place in the global economy. Policy-making must lead the transition to cleaner energy and to an increasingly digital world. Governments must work together urgently to boost investment and establish fair international rules on taxation and trade. 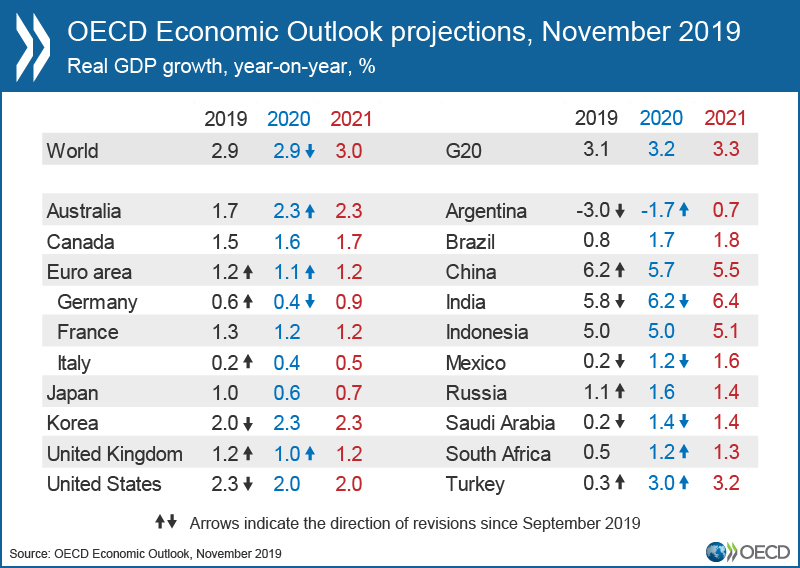 Two years of escalating conflict over tariffs, principally between the US and China, has hit trade, is undermining business investment and is putting jobs at risk. Although household spending has been holding up, signs of it weakening are emerging. Car sales have declined sharply over the past year.

While the fragility of the world economy can be blamed in large part on deliberate policy decisions, it also reflects deeper, structural changes, says the Outlook. Digitalisation is transforming business models while climate and demographic changes are already disrupting existing patterns of activity. China, meanwhile, is rebalancing away from a reliance on exports and manufacturing towards consumption and services.

Speaking in Beijing where he was meeting Chinese Premier Li Keqiang and other heads of international organisations, OECD Secretary-General Angel Gurría said: “The alarm bells are ringing loud and clear. Unless governments take decisive action to help boost investment, adapt their economies to the challenges of our time and build an open, fair and rules-based trading system, we are heading for a long-term future of low growth and declining living standards.”

Aggregate investment growth in the G20 countries, excluding China, slowed from annual rate of 5% at the start of 2018 to only 1% in the first half of 2019, the Outlook shows. Global trade volume growth of goods and services is estimated to have slowed to 1% this year – its lowest rate since 2009. Although a modest pick up is projected, it is expected to remain weak.

The Outlook warns that any further escalation of the trade conflict would disrupt supply networks and weigh on confidence, jobs and incomes. Uncertainty about a future EU-UK trade relationship poses a further risk to growth as does the current high level of corporate debt.

For the OECD, strengthening international cooperation is crucial, particularly the need to agree on transparent and fair international taxation and trade rules. The OECD is also looking at how dedicated public investment funds can be geared to help meet long-term objectives such as ensuring society benefits fully from advances in digital technology or facilitating transition to a low carbon future.

Once bulk commodites fully correct, the lies will be plain for all to see.

Ouch. Via Chris Joye at the AFR: In a stunning