SQM Research’s latest newsletter provides commentary on Australia’s pending dwelling construction bust, which SQM believes will run into 2021 and could cause a significant increase in unemployment:

Today we have run with three charts – Australian dwelling completions, commencements and approvals.

Dwelling completions are only peaking now and so there are a whole bunch of projects that are on the verge of completion.

Normally once a project is completed, workers move onto the next project. But as we can see on the commencements chart, there are now less commencements than completions. And so there is less work available, meaning more job losses are coming.

To make matters worse, building approvals are still tracking south and are considerably lower than commencements. This means even more housing construction job losses are on the way over the course of 2020 and likely, 2021. This will happen despite the interest rate cuts, tax cuts and easier lending standards. As the building approvals illustrate, there has been no response as yet in the form of higher demand for new housing.

The real jobs creation phase, where there are labourers and contractors on the ground, naturally happens at the commencements phase and gets slowly wound down as the building gets closer to completion. So with the fall off in building approvals, housing construction is going to be a detraction to GDP for many months to come.

This must be quite the concern for the RBA and for the Federal Government for that matter. As you may have guessed, housing construction is not an insignificant proportion of total employment. The RBA places it at just under 6%.

The last time this occurred was back in 2011 to 2013. However the country still had the mining boom as a major job creator at that time. For now, mining investment seems to have bottomed out and will moderately pick up over the next 12 to 24 months, therefore taking some of the slack. But no one is expecting a massive uplift in mining.

There is of course infrastructure and that may help to an extent. Apparently for FY20 some $13 billion dollars has been estimated to be spent on Infrastructure which should at least keep climbing through to 2023. By comparison, there was some $42 billion dollars’ worth of dwellings approved over the 12 months to September 2019.

Infrastructure better help with the offset. And perhaps with mining added, it will. The RBA is forecasting the unemployment rate to fall to 5% by 2021. But no-one really knows for sure.

Let’s hope they are right. Otherwise Australian unemployment is going to keep rising in 2020 and that won’t be good for anyone.

Just over 9% of Australia’s population is employed directly in construction, with construction employment also at record highs:

Whereas according to the RBA, 5.8% of Australian employment is related to residential construction alone:

As the residential construction sector downturn continues over the next year, the impact will be felt in these sectors too.

Thus, with commencements and approvals both crashing, severe job losses are in the pipeline, as suggested by job ads:

Moreover, infrastructure investment is unlikely to provide much jobs support.

Second, the decline in residential construction is forecast to dwarf the increase in infrastructure investment: 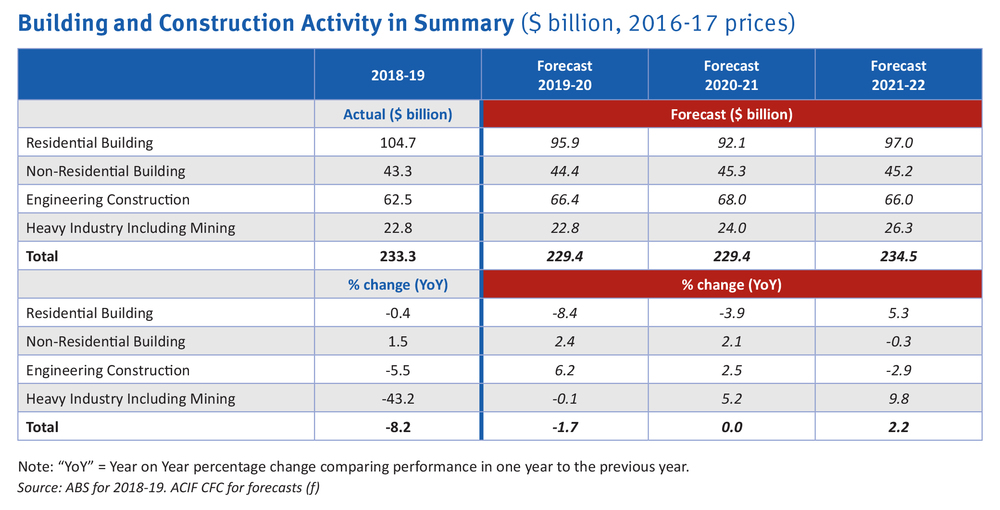 This is the inherent problem with a construction economy. The pipeline must be permanently larger with each passing year or the market begins to shrink. This is because it’s the rate of change that matters to GDP and jobs, not the absolute level.

Infrastructure is becoming an albatross hanging around the economy’s neck, whereas residential building is an iceberg dead ahead.

According to NAB, foreign buyers continue to shun

Some residential property developers have