US non-farm payrolls came in below expectations, rising by only 130K in August, compared with expectations for 160K gain. Compositionally, private payrolls added only 96K, compared with expectations for 150K job creation. Interestingly, many economists expected stronger gains for August because of Census-related hiring. But overshadowing this, was the negative “seasonal” effect of the month of August. Even though payrolls data are supposed to be seasonally-adjusted, the process used by the Bureau of Labour Statistics (BLS) to do this is far from perfect, and a downward bias has emerged for August over the past decade.

While payrolls were softer than forecast, wage inflation was not. Average hourly earnings rose by 0.4% in August, compared with expectations for an 0.3% gain. Year-ended wage inflation slowed fractionally to 3.2% from an upwardly-revised 3.3%. Real wage, and unit labour cost growth remain firmly positive.

Overall, the August payrolls number appeared a little stagflationary, raising the question about how exactly the Fed plans to respond. There are still many hawks on the FOMC, who genuinely believe that the economy does not need more rate cuts. But there are also many doves, and nuanced doves, who either see the need for easing, or are willing to bow to financial market pressures (equity market volatility, plumbing problems, USD shortages and the like). The dovish camp outnumbers the hawkish camp, because there are enough FOMC members who believe in both the strength of the economy, and the need to cut off fat tail risks, to support easing. In principle, this could be marginally positive for bonds, and supportive of curve steepening, as short rates fall faster than long bond yields. Indeed, as per our previous work, there is evidence of reflation building, and long bond yields could well rise, even as the Fed conducts more “insurance cuts”.

We are not particularly worried about the labour market. Historically, there are strong positive correlations between US retail sales and US labour income, or retail sales and employment. But there are question marks about which variable leads, and which one lags. Purists believe that labour income drives spending. But the evidence is that retail sales drives labour income and employment. This is because when the consumer makes up a critically large portion of GDP (in the US’ case, 70%), causation reverses. There is a feedback loop to be sure – but in order to have any confidence in forecasting spending, one really needs to have information from outside the loop. 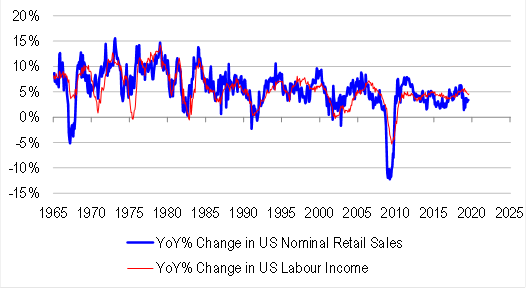 This is where US loan demand is interesting. The spread between US retail sales and labour income growth can be predicted by the strength of mortgage demand, as proxied by the net balance of US banks reporting stronger loan demand from the Feds’ Senior Loan Officers’ Survey. This makes intuitive sense, because housing is the other significant driver of consumer spending growth. And as of August, loan demand was rising strongly, consistent with retail sales growth outpacing labour income growth in the period ahead. And if this were to occur, we would also expect employment growth to pick up shortly afterwards as well in response to better consumer spending growth. Linking this all back to world growth, we note that the US has been the buyer of last resort for goods and services produced globally. Therefore, US retail sales have historically led world industrial production, on a one-for-one basis. Continued robust US retail sales growth should continue to support global activity, trade disruptions notwithstanding. Indeed, should the USD start weakening, we would expect US banks to have started extending USD credit to non-US entities again, enabling supply chain expansion over and above the pace of US consumer spending growth.

Can Bloomberg buy the US election?

Via Domain: If you turn on a television set in

Hysterical rubbish is exploding around the

To QE or not QE, that is the question

Via FTAlphaville: The Federal Reserve’s