US existing home sales surprised to the upside, rising by 1.3% in August, taking year-ended growth higher to 2.6% from 0.6%. Housing demand was looking weak at the end of 2018, but now it seems to be turning around, largely in response to lower bond yields and mortgage rates. We think that housing demand recovery is a very encouraging sign for the US economy and value investing. In our recent articles “Tail risk or apocalypse” dated 5 September 2009, and “Uncorrelate me” dated 30 August 2019, we argued that:

With all of these arguments in mind, we are encouraged by the fact that US home sales are now corroborating the green shoots we saw in the Fed’s Senior Loan Officers’ Survey with respect to mortgage demand. We are encouraged by the recent strength of US retail sales, despite slowing labour income growth, because it reflects stronger wealth and credit effects. We are encouraged by the fact that widespread de-leveraging on behalf of the household sector is unlikely, because mortgagees are happy to take on more credit at low rates. Recovering credit demand and home sales support the narrative that bond yields need to rise as a result of positive news. It is consistent with curve steepening. Also, the absence of de-leveraging pressure is favourable for value, because it allows us to say that fundamentals are able to drive asset prices, rather than the other way around. 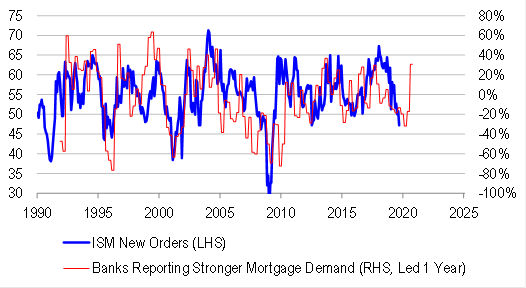 But if the transmission from stronger US demand to Chinese supply chains is broken by tariffs, global growth lags the US and the latter’s currency rises, sucking in capital that chokes off EMs even more.