Damien Boye at Credit Suisse has his take on the Powell Put overnight:

Overnight, Fed Chair Powell delivered the dovishness the market was looking for, but had not fully priced in. He suggested that:

The last comment is particularly stunning, because Powell has admitted the Fed’s reflexivity to the market, creating increasingly complicated feedback loops. Notwithstanding this, it appears that an end-July rate cut is coming. Money market pricing has shifted back to pricing in a certain July rate cut, after some doubt following the stronger-than-expected June payrolls number. Indeed the market is pricing in some possibility of a 50bps rate cut in July.

Beyond the short-end of the curve, we also saw the slope of the broader yield curve steepen, as short yields dropped sharply, while long yields stayed flat. We saw the USD fall, supporting commodities.

In our recent article, we suggested that steepening of the yield curve should be good for value, even as lower rates support quality. Curve steepening should support believers of the view that the macro outlook “is not that bad”, allowing them to take advantage of cheap cyclical exposures. What we have seen in early July however, is that the yield curve has steepened – but value has not been able to get off the canvass. Quality and momentum trades (which incidentally have become very highly correlated) have powered ahead. 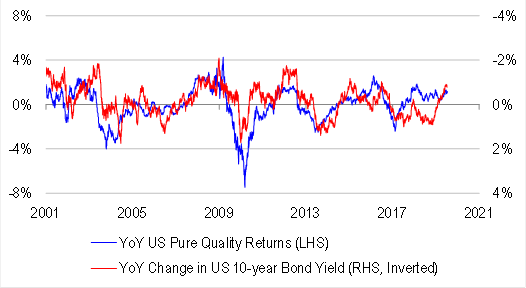 Our model portfolio is partly hedged against this risk of undershooting in value in equities, because we have taken on board value in the asset allocation space via commodities. But we do have to wonder what exactly has the market so spooked about cyclical value, and so excited about the defensive momentum trade. We wonder because outside of equities, value (or carry) has actually worked quite well as a strategy – equities really do seem to be the odd asset class missing out. And we wonder because within equities, central bankers have actually had remarkable success in suppressing volatility, despite concerns about trade and geo-political tensions, as well as elevated valuations more broadly. Low volatility is supporting carry trades from a multi-asset perspective, and should be supporting value strategies within equities. But we are yet to see value recover in earnest. Rather, we have merely seen value flat line over the past few months. Are we to consider this a relatively good outcome against the backdrop of sharp underperformance of the strategy over the past few years?

If the defensive momentum trade continues, investors are really suggesting that it is the end of the world – that central bank puts will eventually not matter, and that the “bubble in everything” will collapse leading to global recession and de-leveraging. Perhaps this is because there are many things that central bankers do not control in the world, like trade wars. At best they can only respond to the fallout from these risks or policy mistakes.

A former colleague has suggested recently that “we are all carry traders now” because as interest rates fall from a very low starting point, investors will need to reach out the risk spectrum to achieve any meaningful return on their investments. Multi-asset investors are heeding this message. But stock pickers are not. Instead, they are taking the view that some, if not all major asset classes are priced for negative carry in the long haul, making cash look relatively attractive despite low rates.

We do not seek to resolve this debate here. What we can say though is that if the Fed follows through with its promise to do whatever the market wants it to do, by cutting progressively or aggressively, the USD can weaken, supporting commodities. And commodities are an “either-way” trade. If world growth picks up, commodities are likely to experience their typical upswing. If it slows, financial demand could support some parts of the complex anyway, as commodities are a relatively cheap late-cycle inflation hedge, in an environment where inflation risks are underpriced (ie the inflation risk premium in bonds is negative).

Value remains interesting to us because:

Also, we are interested in anti-momentum – a rough proxy for value. With uncertainty as high as it is around the world, we cannot help but feel that at the flick of a switch, defensive momentum investors could be wrong-footed. After all, momentum strategies are a “straddle on Sharpe”. If one visualizes the payoff structure of a call and put option combined in the Sharpe ratio (strategy conviction) space, an investor would win if the Sharpe ratio is extremely negative or positive – but lose on premiums in the event that Sharpe is low. And when uncertainty is high in the world, Sharpe ratios have to be low.

Trump has jumped the shark this time

Republicans are joining the backlash, via

Check this out: It's good news of course. Fed

What would a Biden Administration do to markets?

Time to take the possibility of a dementia

Paul Kelly thinks it's the end of America: The