The Australian dollar piled it on across the board after decent Chinese credit:

The junk rally is under pressure:

Apparently all news is good news now for equities, including rising bond yields!

US core CPI came in above expectations, rising by 0.3% in June. This took year-ended core inflation higher to 2.1% from 2%. Compositionally, there were a number of factors boosting core CPI inflation, with rental inflation printing quite robustly despite deterioration in several housing indicators.

The acceleration in core CPI inflation, and the bond market sell off underscore the fact that the inflation debate, especially when it comes to the fallout from trade disputes, is very much alive. Never mind whether one is an “inflationista” or “deflationista” – the point is that there is uncertainty and debate at present. In contrast, the bond market is pricing in inflation as if there is no debate, and that disinflationary, or even deflationary scenarios are worth paying up for.

In response to the upside surprise in the June CPI data, as well as a poor 30-year auction, US 10-year bond yields spiked higher by around 8bps. Australian 10-year bond yields are up around 11bps on the day at time of writing. Yield curves everywhere are starting to steepen, even before we have seen rate cuts from the Fed or ECB. Indeed, the US 3-month/10-year yield curve is on the precipice of entering into positive territory. This sort of curve steepening, if sustained, should support value investing within the equity market, as reflation starts to get priced in, and investors stop worrying about hard landing, de-leveraging risks which traditionally undermine confidence in mean reversion. It should also be marginally negative for quality and bond proxy exposures. Yet in the past few days of curve steepening, we have not seen value bounce back materially, even as defensives have given up some alpha relative to cyclicals.

For mine that is because the market still knows in its bones that this is a head fake. The blip in US inflation will pass. If it is trade war related then it is a pig in the python and can be looked through. If it is more fundamental than it is a late cycle outlier. Wage inflation is already easing as US growth slows via the fiscal cliff, stalling oil patch and trade blow back. Global growth is slowing even faster. Chinese stimulus is moderate at best and no more than an offset for trade weakness. European stimulus is modest and likewise offset by trade impacts. Check out the global leading indicators from ANZ: 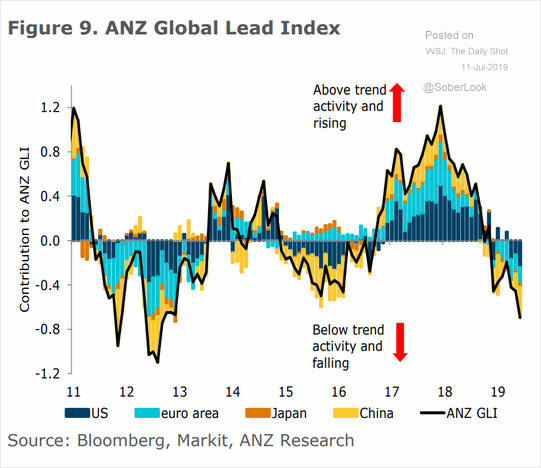 The main factor thing that can turn this around is Trump taking his boot off China’s throat. That still seems unlikely, not least because leaving it in place will aid his 2020 re-election, notwithstanding pain in certain rust belt seats.

Until then, the Aussie dollar cannot get far to the upside and remains at risk to the downside.

DXY was up again as EUR gets smashed. There is

A spike in new cases of coronavirus shook

The Australian dollar shurgged off the news of