International stock markets ripped higher in August and both the Australian dollar and bond yields fell, completing a trifecta of investment themes that we have been positioned for. With this backdrop all of our portfolios performed strongly:

Given our portfolio tilt toward Quality stocks, our portfolios once again performed strongly over the month of August. Our International fund was up 4.5%, Australia up 0.6% and the tactical funds up between 0.9% and 2.7%.

The international performance was boosted by the Australian dollar devaluation tailwind (USD up 0.6%) and our underweight position in Emerging markets.

Global bond yields fell in August on emerging market fears, with US 10-year yields declining 0.12% to 2.85%. Australian 10 year yields fell more than US yields, ending the month at 2.52%, the equal lowest since December 2017 – benefitting our bond positions.

With so many of our portfolio positions being rewarded both this month and last month, we have begun to make some portfolio changes to reposition for the next wave.

August also saw tariffs imposed on Turkey by the US, sparking a sell-off in Emerging Markets globally.  On a day to day basis, there has been considerable volatility in stocks as news lurched between negative (worsening news from China / US trade talks) and positive (progress in Europe / US and Mexico / US trade talks).

Our expectation (acknowledging the outcome is very uncertain) is China and the US will not reach a quick agreement and China will resort to further debt-driven investment spending to ensure that its economy is not overly affected.  This has a number of implications for our stock holdings.

August saw the winding down of the US and European reporting seasons and the start of a month-long period of Australian company reports.  The US reporting season was good, with forward earnings continuing to rise – this is where our portfolio is most exposed. European earnings were less positive, and Australian earnings are weak.

On the whole the global reporting seasons saw earnings expectations exceeded by most companies, however, there were a few disappointments on the updated outlooks and guidance. In the US, with the notable exception of Facebook, most Technology companies delivered impressive results (the NASDAQ was the best performing US index) while Value companies were also rewarded when they showed evidence that any margin compression was contained. European results were more subdued with contagion concerns from Turkey seeing indices there retrace. Locally it was more of a similar story to the US, with the high P/E multiple stocks outperforming their Value peers ( with the notable exception of the Telecom sector where we saw industry consolidation via a merger).

Looking in more detail at the domestic reporting results, more than half of companies saw upward revisions to cost estimates, though they still remain relatively benign from a historical context. The few pockets of cost pressure came from higher raw materials prices and higher US labour costs. Dividends were on the rise with upward surprises from cash-flow rich resource companies and a number of Industrials. Higher growth expectations in company outlooks were amply rewarded with the Technology and Health stocks the stellar performers over the month.

In Australia, Scott Morrison became the 30th Prime Minister of Australia replacing Malcolm Turnbull, after an impasse on the government’s energy policy. With a weakening housing market, Australia is hoping that a pick up in capital expenditure will rescue growth – and so political uncertainty will not help.

We continue to believe Investment markets are late in the cycle, the issue remains that no one knows how late. Here is a summary of what we saw over August and how it is affecting our thinking :

In our tactical portfolios, we own cash, bonds, international shares and Australian shares. We tend to blend these portfolios for clients so that each investor receives an exposure tailored to their own risk and income requirements.

The broad sweep of our asset allocation over the last 18 months was to ride the Trump Boom, switch into Europe in March / April last year as the US became overvalued and then switch back into the US as the Euro rallied and the USD fell.

We have been using rallies in stock markets to reduce our holdings.

We remain underweight shares in aggregate, overweight international shares and significantly underweight Australian shares. Given the strong performance of our portfolios in recent months, we are currently reweighting.

Over / Underweight positions by portfolio

Our tactical foundation portfolio is designed for investors with lower balances, it uses exchange-traded funds for its international exposure rather than direct shares. The reason for this is parcel sizes,  you can’t buy half a Google (Alphabet) share directly and so we use exchange-traded funds which buy baskets of stocks instead. The tactical foundation portfolio is a balanced fund, not as aggressive in its holdings as the growth fund nor as conservative as our income fund.

In August this fund increased by 2.0%.  The fund continues to be underweight Australian stocks.

We continue to have a considerable tech / IT exposure that has produced handsome rewards this month. The portfolio was largely unchanged as we monitored the second quarter results, although in early September we have been trading a number of stocks where the quality has been declining or are looking expensive. We are beginning to see to see some investor rotation into the unloved Value stocks that we have targeted and whose performance has languished this year.

Domestically, with the increased demand for Quality stocks stretching valuations. We have booked some profits in Treasury Wines, CSL and Cochlear and increased our exposure to the Commodity sector, accumulating some Rio Tinto following its share price weakness post result and the growing likelihood of further Chinese stimulus.

In August software and hardware providers continued to surge but there was also some weakness in the semiconductor equipment manufacturers. Elsewhere our material companies (Oil & Paper providers) performed well, while our Japanese construction firms were key detractors after reporting weak results. French IT consulting firm ATOS had a bad month after questions were raised on its accounting treatments.

Domestically weak results from Flight Centre and Challenger were punished while re-affirming growth stocks like CSL and Brambles saw increased investor interest. The announcement of consolidation in the telecommunication space with the merger of TPG and Vodaphone was a positive to all players, including the incumbent Telstra.

As you dig deeper, you should also be interested how the return was achieved – for example if your fund manager is taking lots of risk but only performing slightly better than the market then you should be concerned. Similarly, if you can get market returns but at a much lower risk then that may be an appropriate trade-off.

Our portfolios to date have been taking less risk and in most cases out-performing benchmarks. The disclaimer is that they have only been running for 13 months, and that is not enough time to make definitive judgements.

We manage our portfolios for investors through separately managed accounts, which have a host of benefits including transparency,  individual tax treatment, direct ownership, customisations (including ethical overlays) and low trade costs.

The table below shows performance for a client paying the maximum administration fee. We have not added in any benefit for franking credits or for withholding tax credits. 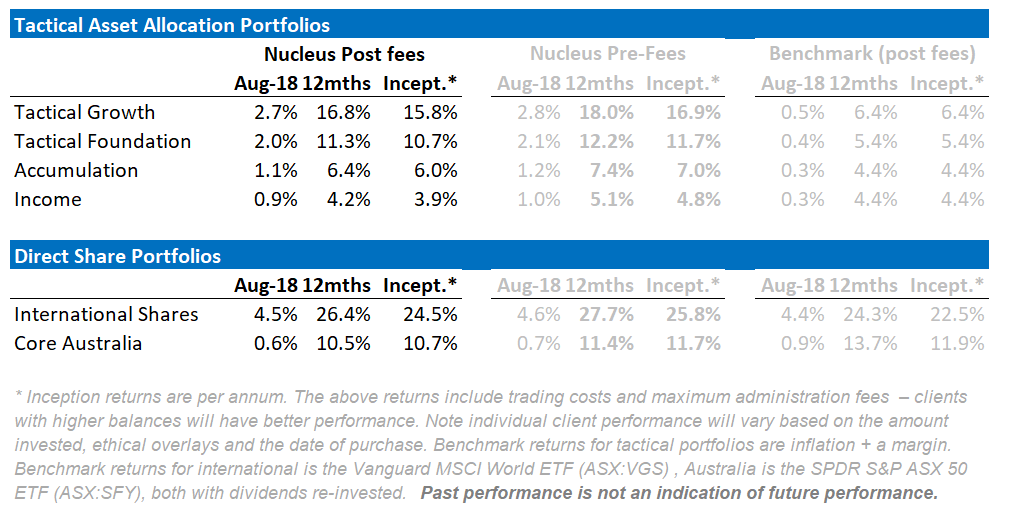 In summary, our view continues to be that Australian investors are better off holding international investments at this point in the cycle.

We retain relatively large cash balances to hedge against volatility and to look for a cheaper entry point. If markets continue to be weak then we will look to buy more equities. We are concerned about the potential for trade wars or an emerging markets crisis. These will be a key focus for us over the next few months.

Our intention is that our portfolio is positioned to take advantage of our key themes but minimise risk in the event that our themes take longer than expected to resolve themselves.

July and August have been a lesson for investors in positioning. The big picture macro themes that drove performance over the two months have been in place for a considerable period of time, but the price movements occurred over a very short period.  The issue now is positioning your portfolio for the next move.

MB Fund Podcast: The Future of Financial Advice with Purpose Advisory and Metlife

The landscape of the financial advice industry

MB Fund Podcast: Will Technology Driven Deflation be 'The Price of Tomorrow'? With Jeff Booth

Join us as we discuss Technology's ever-growing

We are in a strange political environment.

Join us as we discuss CBA's real-time tracking of