We are sitting on a considerable cash balance in all of our Tactical portfolios – our Tactical Growth fund targets a 10% exposure to cash and bonds, our weight is currently 34%.  We have even more cash in the more conservative funds.  We have been holding part of that cash in a range of international currencies and so have benefited from the falling Australian dollar.

The fundamentals for shares look good, valuations don’t. Which, despite all of the ups and downs of the last few months is largely where we have been for the past year.

There are two ways to “cure” high valuations: higher profits or lower stock prices. The pace of profit growth has managed to outstrip prices for the last few months, but in the latest quarterly results, we are starting to see some of the excitement being tempered. By this I mean that earnings growth is still very strong, but not as strong as expected last month (except in the US): 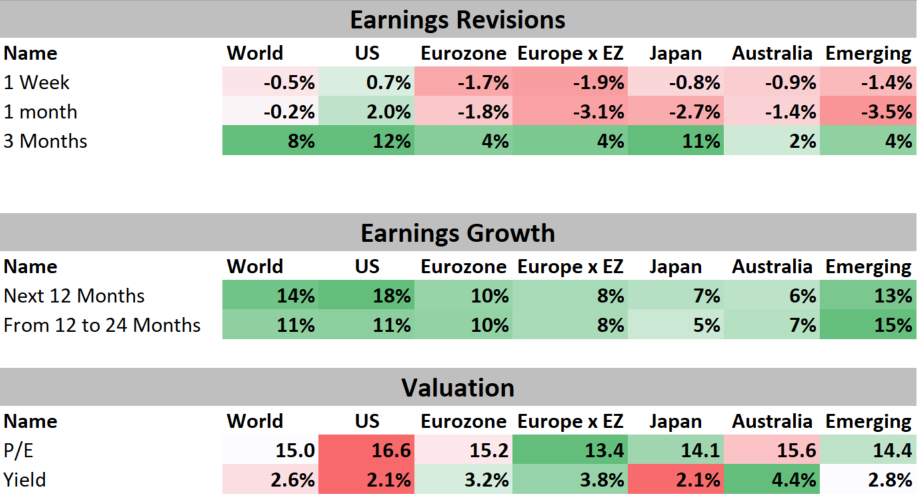 Often the last stages of a bull market can provide strong returns, however the risks are elevated and you don’t want to hold on too long.  Our tactical asset allocation continues to be based on getting as much exposure as we dare to over-valued equities that continue to get even more over-valued while maintaining protection in case it all unravels.

To be clear, we don’t think that we have reached the end of the current investment cycle, especially so as the long-awaited Trump tax cuts are on the verge of triggering a late-cycle US boom.

Can this be derailed by a trade war? Yes. We are treating Trump’s trade war as mainly posturing, but there are clear dangers if it becomes something more.

The returns above include fees and trading costs on a $500,000 portfolio. Note that individual client performance will vary based on the amount invested, ethical overlays and the date of purchase. The benchmark returns do not include fees. See performance section below for relative returns.

The effect of an overvalued or undervalued currency is usually recognised when the currency makes it’s move and for a few weeks afterwards but then seems to be largely forgotten.

I take the view that undervalued or overvalued currencies for most supply chains:

For example, if Boeing uses a European supplier for a part on their planes, then the Euro rising 10% over a few weeks is unlikely to see Boeing change suppliers immediately. However, leave the Euro at the elevated level for six months or so and then Boeing will start to look at other options – the less unique the part, the more likely Boeing are to switch.

In my view that is where Europe has been for about 18 months or so, and over April the effects have become apparent with Europe showing a number of signs of slowing and the Euro beginning to fall.

We have been exiting our European positions for a little while now, and the falling Euro and weakening economic picture are suggesting that this theme has some time to run yet.

As a reminder, we look at the key themes facing our portfolios as being:

Our core position is that Trump is trying to engineer a boom. It will not be sustainable and will likely be followed by a bust that leaves the US economy in a worse position but that is a future problem – positioning the portfolio for the boom is the current issue.

The proposed tax cuts are badly targeted by giving most of the benefit to the rich and to companies, trickle down is unlikely to work, the tax cuts are unsustainable, and they are only a short-term “sugar hit” for the US economy.  But it is going to be such a huge stimulus that you don’t want to stand in the way of it as an investor.

So, we want to play the boom, keeping a sharp eye on the bust.  Our portfolio positioning on this basis remains:

In China data continues to weaken, suggesting that the rebalancing is occurring. A cut in the reserve rate in March and discussion of fiscal intervention might seem to some as a sign that the authorities want to return to debt-driven growth. Our view is that these measures are more about managing the downward glide path, potentially in the face of a trade war.

Over the medium term:

Our expectation is that China is going to continue to “glide” lower to try to normalize the capital expenditure to consumption in-balance that we discussed in our recent webinar.

It is our view that the Chinese economy will continue to slow over the coming years – Japanese style lost decades, and low inflation/deflation remain more likely than a dramatic bust, which means a grind lower for commodities and the Australian dollar.

Our portfolio positioning on this basis remains:

In our tactical portfolios, we own cash, bonds, international shares and Australian shares. We tend to blend these portfolios for clients so that each investor receives an exposure tailored to their own risk and income requirements.

The broad sweep of our asset allocation over the last 18 months was to ride the Trump Boom, switch into Europe in March / April last year as the US became overvalued and then switch back into the US as the Euro rallied and the USD fell.

We have been using rallies in stock markets to reduce our holdings.

Over / Underweight positions by portfolio

Our tactical foundation portfolio is designed for investors with lower balances, it uses exchange-traded funds for its international exposure rather than direct shares. The reason for this is parcel sizes,  you can’t buy half a Google (Alphabet) share directly and so we use exchange-traded funds which buy baskets of stocks instead. The tactical portfolio is a balanced fund, not as aggressive in its holdings as the growth fund nor as conservative as our income fund.

In February this fund increased by 1.6%.  The fund continues to be underweight Australian stocks.

Our biggest call is underweight energy. In particular oil producers. This has not been a good call over the last six months, and our outperformance has been despite the underweight to oil rather than because of it.

We have been doing a lot of soul-searching on this call over the month. The broad overview is:

So, the question from here is whether we hedge our risk to political events by buying oil stocks in the face of fundamentals that suggest the oil price should be materially lower. If the risk were greater or the oil price lower, I would probably hedge. Given the current situation and current prices, we are going to stay underweight oil. But the debate rages on.

Our sole holding in the energy sector, Neste Energy is up around 70% over the past few months, which has shielded our portfolio from the rising oil price.  Neste is a Finnish oil refiner, making a significant investment in green technologies and is well regarded by a number of sustainable rating firms including being in the Global 100 most sustainable companies, the Dow Jones Sustainability index and CDP.

We are underweight financials – mainly as we can’t find US financials that are cheap enough to justify purchasing. A number of financials performed well this month – Bank of New York Mellon and DBS group were the stand-outs. Insurance continues to be a sore spot, but we are looking to continue to build holdings in the sector with the view that after such severe losses in 2017 that insurance premiums will rise significantly.

We have a reasonable tech / IT exposure. The rising spectre of a potential trade war saw some significant price falls in this sector. We are using to opportunity to buy some more. There are a number of smaller tech stocks that we own, in particular, a range of semiconductor stocks where we like the growth outlook. It is worth noting that part of the reason for Apple increasing the price of its latest phone is an increase in memory and components. This is a positive for semi-conductor stocks more generally, especially if a “feature war” breaks out in the smartphone space. We current hold a range of stocks that should be helped by this trend (Lam, Applied Materials, Skyworks, and to a lesser extent Cisco). We recently bought Alphabet (Google), Western Digital and Micron following recent price falls.

As you dig deeper, you should also be interested how the return was achieved – for example if your fund manager is taking lots of risk but only performing slightly better than the market then you should be concerned. Similarly, if you can get market returns but at a much lower risk then that may be an appropriate trade-off.

Our portfolios to date have been both out-performing benchmarks, and taking less risk. The disclaimer is that they have only been running for nine months, and that is not enough time to make definitive judgements.

The returns above include fees and trading costs on a $500,000 portfolio. Note that individual client performance will vary based on the amount invested, ethical overlays and the date of purchase. The benchmark returns do not include fees.

In summary, our view continues to be that Australian investors are better off holding international investments at this point in the cycle.

We retain relatively large cash balances to hedge against volatility and to look for a cheaper entry point. If markets continue to be weak then we will look to buy more equities. We are concerned about the potential for trade wars, which will be a key focus for us over the next few months.

Our intention is that our portfolio is positioned to take advantage of our key themes but minimise risk in the event that our themes take longer than expected to resolve themselves.

Damien Klassen on What Will Burst the Bubble | ABC's The Business

Stock markets have disconnected from fundamentals

MB Fund Podcast: Is the recovery driven by Robinhood & Robots? With Kevin Muir (The Macro Tourist) - Updated with podcast audio

We have had a special

May saw share markets extend their bounce in the