There have been changes proposed by the Labor party to imputation credits. We have put together a quick series looking at a number of aspects for investors:

There have been changes proposed by the Labor party to imputation credits. There is a lot of debate about the pros and cons for investors, the other relevant question is whether imputation credits have distorted the capital allocation decision in Australia in a good way or a bad way.

My take is that there are distortions which have a positive effect on capital allocation in Australia, but the distortions are not as significant as they look at face value.

I expect the changes proposed by Labor would have little effect on the capital allocation decision. The experience from overseas is that when the benefits of franking credits are completely removed, dividend payout ratios fall but there are no conclusive effects on the capital structure.

Given the proposed changes only affect a subset of franking beneficiaries, I expect there would be little change to how Australian companies allocate capital.

My experience is that companies go through the following process:

2. Decide the minimum level of dividend to pay. Usually, this involves paying at least the same dividend as the prior year if possible.

3. Decide how much to invest in growth capital

4. (a) If cashflow is still positive.  Decide what to do with the remaining cash between: (i) paying down debt / increasing cash (ii) returning more cash to shareholders via a special dividend, or higher dividend or buying back shares

4. (b) If cashflow is negative.  Decide how to fund the shortfall between: (i) increasing debt (ii) raising equity

This means that for step 2 (above) the process becomes: “pay a dividend to maximise the amount of franking credits paid to shareholders”.

If this was the case you would expect to see a difference in the payout ratio – and there is: 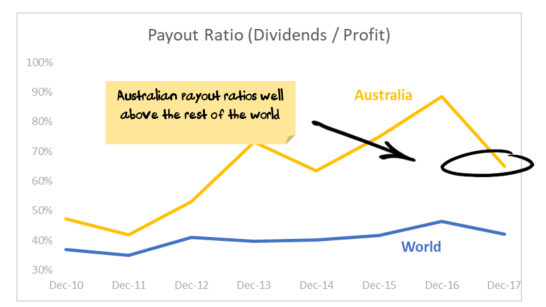 However, this is only half of the story.  As you can see in step 4a above, companies return capital to shareholders through dividends or buybacks, and when you add the two together the difference between Australia and the rest of the world goes away: 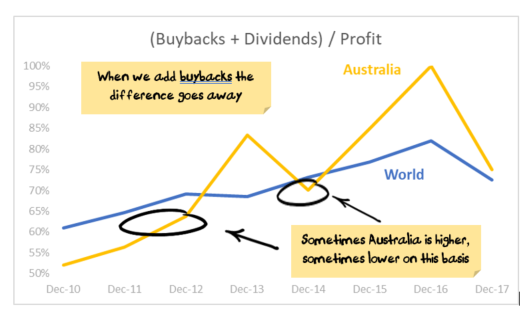 Are buybacks a good thing?

I have a problem with management incentives and buybacks (see post from last week), but excluding that (very solvable) issue, buybacks are not that different to paying dividends except: (1) gains come as capital rather than income (2) buybacks are usually more tax efficient as investors get the returns as capital gains which taxed more concessionally and only taxed when the shares are sold.

From a tax perspective, contrary to popular belief, for most investors there is little difference between owning international shares and Australian shares (link).

The studies suggest that for purely domestic companies, yes. For subsidiaries of international companies no.

It does make sense that if domestic companies know that shareholders will receive franking credits then the company would be less likely to avoid the tax.

Also, perhaps more importantly, if a company has a choice of paying tax in either:

then it does make sense to pay the tax in Australia (up to a point).

Anecdotal evidence also suggests that for some companies it may be worth bringing forward tax payments in order to create franking credits that can then be paid to shareholders.

However, none of this makes sense for foreign companies. And the studies concur.

So, its a positive that having franking results in less tax avoidance from Australian companies. The foreign companies avoiding tax were probably going to avoid tax regardless of whether Australia has franking credits or not.

Australia is one of the few countries internationally that has dividend imputation. However, quite helpfully if you are interested in looking at changes there were seven  European countries that had dividend imputation and then removed it after joining the European Union including Germany, France and Spain.

This provides a useful backdrop as we can now see the effect that removing dividend imputation had on companies in those regions. 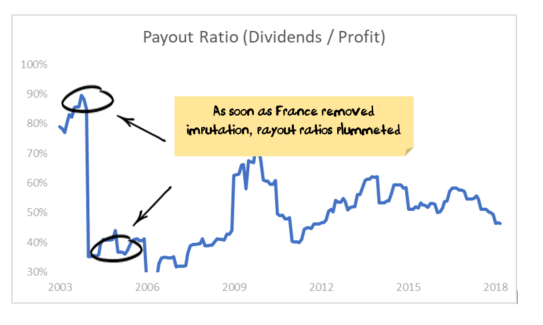 I view this as further support of the view that companies are making capital expenditure decisions separately from the return of capital decisions.

There is a whole topic hidden here so I’ll just touch on the key points.

Capital expenditure (capex) has been falling for fifty years. Some lament this as being a symptom of too much focus on short term profits – I’m not convinced we have enough evidence to draw conclusions.

At the same time, the proportion of manufacturing has been falling. Also, many manufacturers have been outsourcing large parts of their supply chain – for example, Boeing outsourced over 70% of the 787 supply chain vs closer to 35% for the 747, which means more and more of the value that Boeing adds is from services. Service companies do not need to spend much on capital expenditure.

A number of studies conclude that for large capitalisation companies that acquisitions in aggregate destroy value (small companies are different).

Having capital constraints therefore helps. The decision process to raise debt or equity to undertake an acquisition is presumably more detailed than to spend cash that is just sitting on the balance sheet. This is a vote in favour of franking, as higher payout ratios will mean that Australian companies will need to raise debt or equity more frequently.

Therefore franking is probably helpful at the margin.

There are no end of studies addressing the valuation of franking credits.

The net effect is that they are valued somewhere between 0% and 50% – this is likely due to a mix of timing (franking credits are not paid immediately) and foreign shareholders (who get no benefit).

Presumably the removal of franking credit refund will reduce this number at least a little.

Australia has a very small corporate debt market relative to the size of our economy and equity market.

There is debate over the reasons, but having imputation credits is likely to be a contributor because:

The removal of franking credit refund should slightly tilt the playing field back in favour of corporate debt.

Franking credits have distorted the Australian capital allocation, with a distinct preference for higher payout ratios in Australia and fewer buybacks.

However, this is at worst a neutral outcome, and probably a good discipline for Australian companies.

Franking credits are at least partially responsible for the stunted development of Australia’s corporate debt market.

Franking credits have been good for tax receipts, and support investment in Australia by domestic companies.

Labor’s changes are relatively minor, unlikely to make much difference to any of the above.