By Martin North, cross-posted from the Digital Finance Analytics Blog:

The latest edition of the Digital Finance Analytics Household Finance Confidence Index shows a further drift lower, remaining below the 100 neutral benchmark. It fell to 94.6 in February, down from 95.1 the previous month. This is in stark contrast to improved levels of business confidence as some have reported.

The slide was more significant among those households with investment properties, thanks to higher mortgage rates, concerns about interest only loan resets and lower home prices. In additional net rentals are lower. Owner occupied households also fell just a small amount, mainly because of rising living costs against flat incomes. Those renting, or otherwise excluded from property are the least confident. This continues the long term trend, indicating that property ownership still bolsters confidence to some extent.

The slide was pretty consistent across the states, other than a small lift in WA.  Compared with a year ago, confidence levels in NSW and VIC are significantly lower.

We also see a similar story across all the age bands, suggesting the decline in confidence is similarly widely spread.

To understand the reasons for the falls we can look to the index scorecard. Overall, there was a rise of 1.2% in households feeling less secure about their jobs, compared with this time last year, and a small reduction in those feeling more secure.

Those with savings were less comfortable, thanks to continued falls in deposit rates, and recent discussions about deposit bail-in following passage of the recent APRA Act.  More significantly, more are dipping into their savings, to maintain lifestyle, and so balances are reducing. Many realise this is not a sustainable position.

Just under half of households remain uncomfortable with the amount of debt they hold, around half saw no change over the past year. Concerns related to rising interest charges which are working through, and also ability to maintain mortgage repayments. Some households have resorted to obtain additional credit, either on a card, or separate loan, to maintain their finances. Again many realise this is not a sustainable position.

Costs of living concerns rose, with 76.7%, up 3.84% on last month, households saying that costs of electricity, fuel, rates, child care and school fees all impacting. Only 2.5% of households said their costs had fallen. 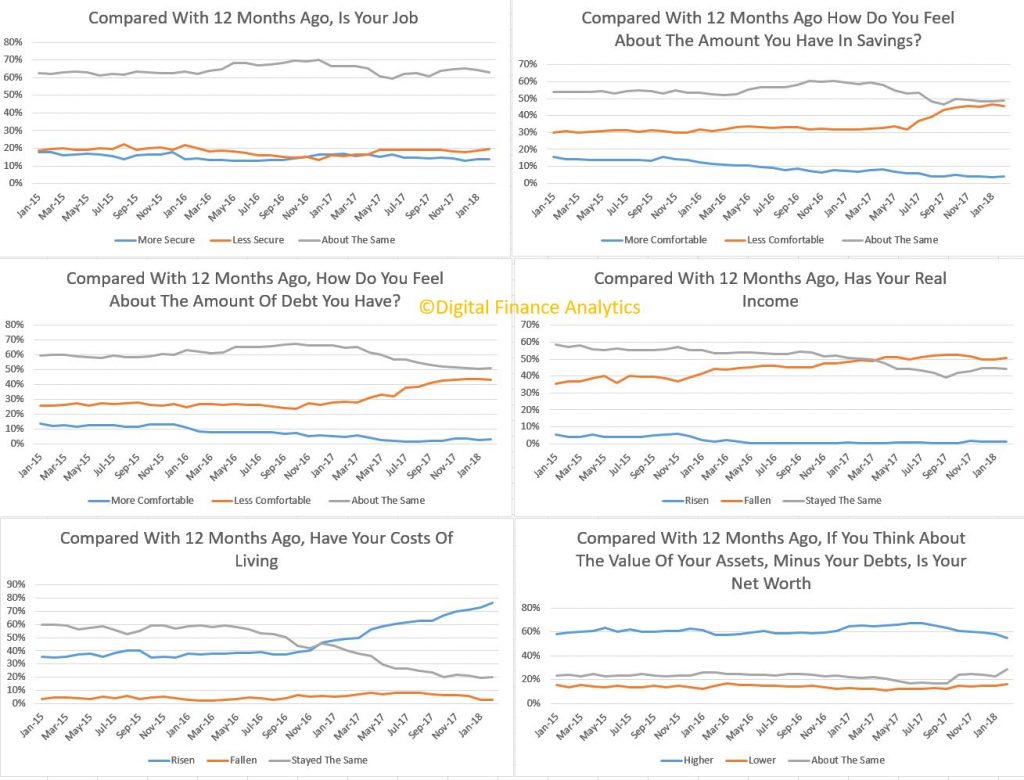 Based on our research, we see little on the horizon to suggest that household financial confidence will improve. We expect wages growth to remain contained, and home prices to slide, while costs of living pressures continue to grow. There will also be more pressure on mortgage interest rates as funding costs rise, and lower rates on deposits as banks trim these rates to protect their net margins.

By way of background, these results are derived from our household surveys, averaged across Australia. We have 52,000 households in our sample at any one time. We include detailed questions covering various aspects of a household’s financial footprint. The index measures how households are feeling about their financial health. To calculate the index we ask questions which cover a number of different dimensions. We start by asking households how confident they are feeling about their job security, whether their real income has risen or fallen in the past year, their view on their costs of living over the same period, whether they have increased their loans and other outstanding debts including credit cards and whether they are saving more than last year. Finally we ask about their overall change in net worth over the past 12 months – by net worth we mean net assets less outstanding debts.

We will update the results again next month.

CBA: Aussie household consumption is about to stall