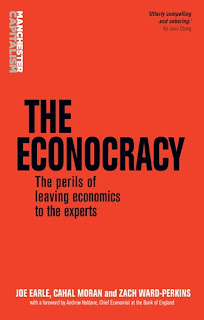 I have just read a fantastic economics book. In entertaining detail, it outlines many issues in the economics profession that I feel strongly about [1] Like the authors, I want my discipline to evolve into one that is much better than it is; more practical, humble, and diverse. So why did I finish the book feeling less than upbeat?

The book is called The Econocracy: The perils of leaving economics to the experts. It is about how the general population has been excluded from public policy debate by an inward-looking economics profession. More than this, the profession is fundamentally failing, having grown in the past three decades to become nothing more than ideology masquerading as science.

Econocracy is written for people with some economics training, or with a keen interest in economics. Or perhaps even someone who is simply concerned about public policy debates being hijacked by economists and their jargon would appreciate it, and I can imagine there are many such people!

I would summarise the main story of the book as follows

I will admit my bias upfront and say I needed no convincing of the first two points. Let me see which part doesn’t quite inspire me as much as I expected.

In the words of authors – Joe Earle, Cahal Moran and Zach Ward-Perkins (EMW) – an econocracy is

A society in which political goals are defined in terms of their effect on the economy, which believed to be a distinct system with its own logic that requires experts to manage it.

I am totally on board here. Making policy in order to nurture a thing called an economy is bizarre, bordering on meaningless. The slightest scrutiny reveals that the economy is whatever economists assume it to be.

When we think of Gross Domestic Product, probably the main measure of the ethereal thing we call the economy, we are actually thinking of a measure whose definition has changed dozens of times. The latest change of note is the inclusion of illegal drugs and prostitution in the European Union offical GDP statistics. So is crime now part of the economy? And if so, is it good or bad to have more of it?

Bringing insights like this to the surface can connect economics to a broader audience. Many people want to put forward their views in political debates about what constitutes a good, and just, society, but are bamboozled by economics jargon, which seems to leave no place for them. Cloaking policy debates in economic jargon limits participation from those who simply want to express their valid moral judgements about how society should be run.

Not only is the economy now the exclusive subject matter for experts who hide their moral judgements, these experts often hide their financial interests as well. If you have seen the 2010 film Inside Job, you would know how prevalent this is, particularly in the economics profession. I can personally attest to the troubles of even getting economists to recognise that they may have ethical obligations. But perhaps that is because their training was so narrow and uncritical.

The decline of critical thinking in economics is beautifully told in the chapter entitled Economics as Indoctrination. For anyone considering studying economics, and for its many of teachers, this chapter will resonate.

EMW make their case that economics courses are best described as indoctrination by presenting the results of a curriculum review they conducted covering 174 economics modules at seven Russell Group universities. Their data is revealing, and provides indisputable evidence that the discipline trains its newcomers in a narrow, uncritical, and unrealistic way.

As a teacher of economics their survey results were fascinating, but not surprising. Multi-choice questions and lack of critical thinking seem to dominate assessment at the two universities I have taught at, while neoclassical methods of optimising representative agent models are the default, and sometimes only, approach taught. If anything, this chapter is a call-to-arms for teachers of economics everywhere.

EMW propose that teaching in a more pluralist and critical way is the answer. Many of the core parts of an economics course would be kept, and some replaced with a more diverse set of ideas and methods. No longer would material be presented uncritically as religious icons to be believed, not challenged, but each idea would be pulled apart and rigorously scrutinised.

However, the battle for change in teaching cannot be underestimated. Just look at the profession’s reaction to the efforts of EMW and their allies at the Post-Crash Economics student group.

The main reaction as has been “change without change”. A group of alternative reformers agree with EMW that the teaching of economics is poor (though in the quality of the teaching, not the content), and have endeavoured to fix it with better teaching materials, producing an updated textbook for the 21st century called Core Economics. Unfortunately this group missed EMW’s central critique – the content should also change!

EMW respond to the Core Economics project in their book. But I don’t think they quite see it as the defensive strategy of a powerful group that it is in reality. To me, this reaction is a signal of the political and financial power of the status quo in economics, and the enormous challenge ahead.

There are other problems I see with their pluralist solution. Teaching a pluralist curriculum requires teachers who actually understand alternative non-neoclassical approaches to economics in all their nitty-gritty detail, so they can be equally taught in a thoughtful and critical manner. There are very few of them.

And to make space for this type of pluralist teaching means dropping parts of the current core economics modules. Which ones should go? Egos will be damaged in this process.

I have personally tried to improve my teaching multiple times, only to find that dropping particular materials and including other new material, combined with more critical and reflective assessment pieces, has been frowned upon by others in the school. Particularly if they are teaching modules later in the course that build on the material that I chose to drop. Some kind of collective choice needs to be made about what topics to drop, and what to keep. And it is inescapable that such a choice will signal to many professors in positions of power that their careers have been wasted on things the discipline now considers to be nonsense, and not worth teaching.

Having an academic tribe that conforms to the same approach gives that tribe power. Notice the book is not called “sociologocracy” or “political science-ocracy”. Disciplines that do teach a variety of methods in a pluralist way typically end up losing credibility to outsiders because of the infighting within the discipline about fundamental issues.

I would recommend the book Economists and the Powerful: Convenient Theories, Distorted Facts, Ample Rewards, by Norbert Häring, which explains how neoclassical economists and their methods become powerful because of a feedback loop between the theories they created, and the support of the political classes who benefited from those theories. Economics as a discipline is now very powerful, and its uniformity maintains its power.

These incentives mean that change needs a grand coalition, rather than a slow evolution of improving the curriculum one module at at time. Past efforts of student groups have sought similar reforms in economics for nearly thirty years without success. I don’t think EMW see the sheer size of the political challenge their proposed reforms face. I do. And that’s probably why it is hard for me to get too excited.

To shift society away from an econocracy to a democracy, EMW also see benefits from economists as a group reaching out to the public to make accessible the technocratic analysis of themselves and their peers. A survey the authors conducted of 1,500 adults across the UK found very low levels of economic literacy in the general public, meaning the economic jargon being sprouted by politicians and the media each day is not actually communication useful information to voters.

I agree whole-heartedly with this proposal. It only takes a few economists to reach out and teach active community groups to be savvy about, rather than intimidated by, economic analysis. And if such efforts result in greater participation from community groups in all spheres of life, it may undermine the demand for bogus economic analysis by vested interests who use it as a shield against criticism.

This idea has promise because it generates change outside the discipline. I simply do not see a way for economics to reform itself from the inside. The only way to change, that I see, is for the rebels and reformers to form a new discipline. Perhaps reaching out to the public is the start of that, which will develop a network of ‘citizen economists’ who are able to share knowledge, and through their networks and organisations, create a demand for work of people trained in this new discipline.

Call this new disciple something catchy, then agree broadly on its scope, some guiding philosophies, then add in some ethical standards. Get the major institutions of the country involved, like the Bank of England, to give it credibility. With some luck this rebel group will soon develop a reputation as being the superior discipline to economics, or what would soon become known “out-dated economics”.

Anyone who has studied powerful informal groups and networks knows that radical change usually comes from outside, while insiders go down clinging to their old beliefs and denying that reform is necessary. The book itself the work of three outsiders; students from Manchester who were able to see the tribe with clear eyes, and a clear head.

I can only hope that with such bright and critical minds as theirs entering the discipline, that the time may be ripe for change, either from within the discipline, or with new leaders rising up to change it from outside. Whatever the case, while I finished the book a little glum, I have finished this review much more upbeat, ready to push for change wherever I can.

fn [1]. I have a PhD in economics, teach graduate economics courses at The University of Queensland, and consult widely for non-profit groups to help them participate in policy development. An important disclaimer is that I have also been peripherally involved with Rethinking Economics, a group very much aligned with the reform efforts of the authors and their student group Post-Crash Economics. The authors provided me a complimentary copy of the book.

For years Foxtel has tried and failed to swim

Foxtel slapped with $1.7b write-down