From Investing in Chinese Stocks.

China has begun a second round of bubble city property tightening, via iFeng: 楼市调控第二波：杭州、武汉、深圳升级调控政策

…On the same day, Shenzhen also adjust the housing provident fund loans down payment ratio, as workers paid into the fund family name no room in Shenzhen, use the public loan funds to buy the first home, down payment minimum of 30%; if already own a home, tapping the fund again requires a minimum down payment of 70%.

Industry insiders fear the change market trends will accelerate now that the strictest control policies ever are in force, iFeng: 楼市遭遇史上最严调控 四季度楼市变化来了！:

Before and after the National Day, more than 20 cities have issued real estate market regulation policy. Reporters learned that the more rapidly to cool the property market after landing around the New Deal, to curb speculative investment demand beginning to bear results. National Bureau of Statistics, 1–10 months, sales of commercial housing area increased 27.0%, the growth rate down 0.1 percentage points over the previous September; residential sales increased 42.6%, the growth rate down 0.6 percentage points.

Centaline Property released study reported that the country in October new home market and second-hand housing market as a whole appears to cool, the recent push plate new home subscription rate fell sharply to its lowest level in April this year. Line the city’s second-hand housing transaction volume in October was declined across the board. Recently, the reporter interviewed found that many, along with much trading experience “frozen”, the current property market panic gradually digested see atmosphere once again gather.Many new disc sales offices are few buyers, the majority of agency stores business is bleak, popular.

…Industry insiders believe that the most important feature is that the current round of real estate regulation enforcement unprecedented stringent.

With policy advice Zhang Hongwei, director of research, he said around the time the agreement strengthen market supervision, many policy stern and precise. Beijing requires pilot qualified as sales prices, and as a land auction conditions of the land in the future be converted into high-priced project sales will be limited when its sales prices, a move that could become a reference to other cities suppression policy enterprises get high impulse. Tianjin, suggests that commercial banks should strengthen the buyers down payment review, will be “the first payment review” to be specific, explicit, reducing leverage industry, regulation of capital flows is expected to play effective.

From the regulatory point of view, that the property market hot trend from Beijing and other cities began to cool has become the industry mainstream sound.

Yan Yuejin said, “From the overall look to the inventory, a second-tier cities is unstable, it is difficult to stabilize the real estate market as a whole. Previous term purchase, limited credit policy after the introduction of mid-October all over the country as never before landing full implementation of real estate control policies and market remediation regulatory measures, which also makes the current round of real estate regulation all times compared with the previous regulation, enforcement is the strongest. regulatory policies around strictly enforced so that buyers have an overall wait and see attitude, cool the market, traded downward trend will accelerate.

And the Beijing bellwether is still slowing: 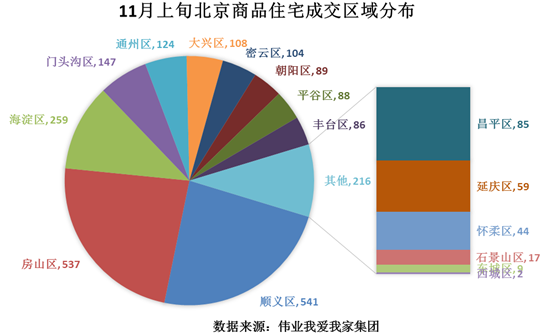 Authorities are serious and will win sooner or later.

More Evergande than you can possibly imagine

For those needing a deeper take on things try the

Full note from Zero Hedge. I agree with the

The Evergrande saga is intensifying daily. The