NB.  Sample = 1,792. The data in the above tables comprise 2-week averages derived from the first preference/leaning to voting questions.  Respondents who select ‘don’t know’ are not included in the results.  The two-party preferred estimate is calculated by distributing the votes of the other parties according to their preferences at the 2013 election.

Q: Do you approve or disapprove of the job Malcolm Turnbull is doing as Prime Minister?

39% (down 6% since last month) of respondents approve of the job Malcolm Turnbull is doing as Prime Minister and 39% (up 4%) disapprove – a net approval rating of zero (down 10).

Q: Do you approve or disapprove of the job Bill Shorten is doing as Opposition Leader?

Q: Who do you think would make the better Prime Minister out of Malcolm Turnbull and Bill Shorten?

Q: The Government plans to re-establish the Australian Building and Construction Commission to address claims of union militancy in the construction industry. The ABCC’s powers included preventing any person from revealing they had been forced to give testimony to the Commission, and overriding a person’s right to silence. Do you support or oppose re-establishing the ABCC?

35% support re-establishing the ABCC and 16% oppose. 23% neither support nor oppose and 27% don’t have an opinion. This is a very similar result to when this question was asked last month.

Q: Compared to other issues the Government needs to address, how important is the issue of re-establishing the ABCC?

34% say that re-establishing the ABCC is very or somewhat important compared to other issues the Government needs to address and 41% say it is not important.

Those more likely to think it is important were Liberal/National voters (51% and people aged 65+ (47%).

Those more likely to say it was not important were Labor (53%) and Greens (54%) voters.

Q: The Prime Minister Malcolm Turnbull has announced that he intends to recall Parliament in April to pass legislation to re-establish the ABCC (Australian Building and Construction Commission). If the Senate rejects the bill to restore the ABCC, or the Senate fails to pass it, would you approve or disapprove the Government calling a double-dissolution election?

39% would approve of the Government calling a double dissolution election if the Senate fails to restore the ABCC and 24% oppose. 36% don’t have an opinion.

This represents a small increase in approval since this question was asked in March.

Q: Now thinking about taxes – overall, how fair do you think our present Federal tax system is?

36% think the Federal tax system is very or moderately fair and 55% think it is not too fair or not fair at all. This represents a small shift toward thinking the tax system is not fair since this question was asked in December.

Betting markets are now starting tho rebalance too, from Mark the Ballot: 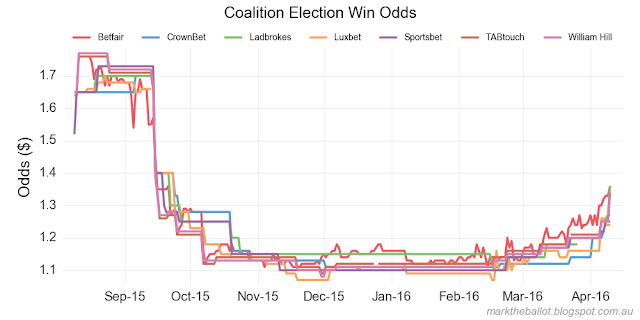 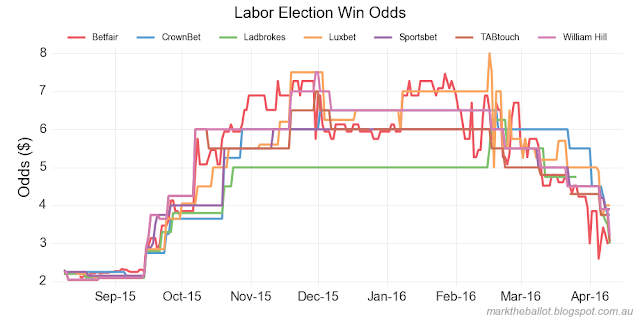 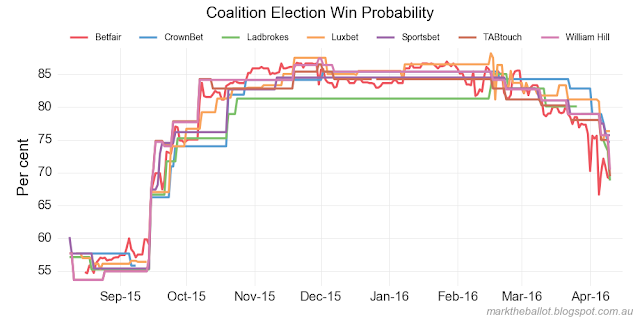 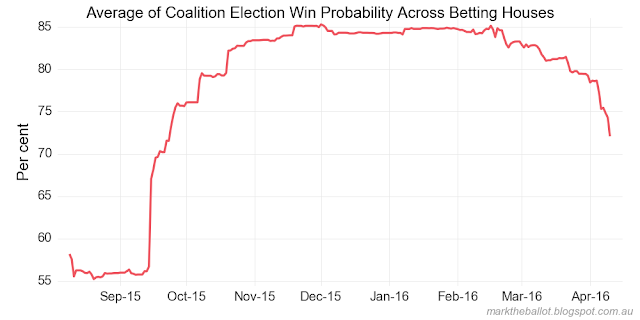 End of China travel ban one week away

So says The Australian: New health advice to the

At The Australian: Magellan Financial Group

Via the ABC: The Federal Government has

Via the AFR: A national royal commission into