By Martin North, cross-posted from the Digital Finance Analytics blog:

Prior to the 2007 Financial Crisis, securitisation was seen as a tool to support economic growth and financial stability by enabling issuers and investors to diversify and manage risk. By transforming a pool of illiquid assets into tradable securities, securitisation frees up bank capital, allowing banks to extend new credit to the real economy, and support the transmission of monetary policy. However, it has the capacity to amplify the flow of credit inside or outside the banking system, increase leverage, exacerbate misaligned incentives in the financial intermediation chain, and, thus, ultimately amplify systemic risk. It was right at the heart of the GFC. Now, Regulators and Bankers are looking for ways to resurrect securitisation, and there are signs of momentum beginning to grow in some markets.

In a recent speech, Dame Clara, External Member of the Financial Policy Committee, Bank of England, noted that whilst it is important to recognise that market-based finance can also present systemic risk, a more balanced financial system should emerge in the long-term. This should make both the real economy and banking system more resilient to economic shocks, as well as help central banks step back from “last resort” measures and allow private markets to operate more widely and efficiently. She also highlighted the important role of investment banks in helping this balance to be achieved. Firstly, by facilitating equity and bond issuance, and secondly by ensuring liquidity in the secondary market for those assets.

In the US and Europe, Securitisation issues fell from 2007 onwards, but are showing signs of recovery (chart shows billions of US dollars) 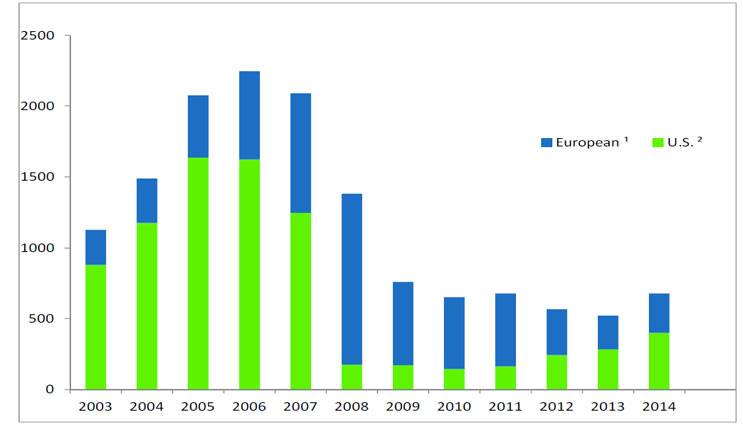 In Australia, where momentum started in mid 1990’s, we saw a similar collapse post the GFC. But again, we are seeing the first signs of a lift in volumes, as the mortgage market has grown. 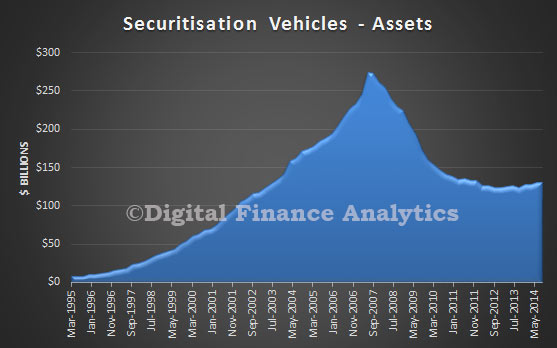 But, is this a good thing? It certainly enables Banks to lend more. Changes to the capital rules will, however, mean these methods are less effective from a capital efficiency view point than prior to the GFC. In December 2014, the Basel Committee on Banking Supervision published “Revisions to the Securitisation Framework”. This framework, which will come into effect in January 2018, forms part of the Committee’s broader Basel III agenda to reform regulatory standards for banks in response to the global financial crisis and thus contributes to a more resilient banking sector. The new concept aims to make capital requirements more prudent and risk-sensitive, reduce mechanistic reliance of the industry on external credit ratings, and reduce cliff effects. In all the proposed approaches a risk-weight floor of 15 percent for any securitization tranche is suggested. Net, net however, securitisation will still be capital efficient.

The IMF recently released a discussion paper on Securitisation, the Road Ahead, where the role of securitisation was discussed, and laid out some ideas as to how to allow securitisation to be used, without the overlay of complex risks. They suggest that:

Placing private securitisation markets back on a firm and sustainable footing has never been more important. Financial risk-taking has resurfaced, but securitisation has yet to retake its instrumental role in rekindling credit flows and diversifying risks. Clearly, securitisation must be managed in a way that supports financial stability rather than posing risks to it. Many reforms have focused on mitigating these risks. They need to be complemented by further policy actions to secure a thriving financial ecosystem for securitisation.

Proposed reforms along the four-stage financial intermediation chain should be strengthened. First, the quality of underlying loan origination practices should be further beefed up to restore the appetite for securitisation. Second, securitisation intermediaries must be encouraged to develop structures that are transparent, straightforward to value, and primarily designed to finance the real economy. Legal ambiguities related to the rights and obligations of servicers, trustees, and investors should be avoided. Establishing the secure, transparent, and cost-effective transfer of claims on collateral will be paramount. Third, credit ratings can be put to better use. Standardised definitions of securitisation characteristics and full disclosure of the rating process would increase transparency and confidence. The practice of rating shopping should be disclosed and the removal of references to external ratings in regulations accelerated. Fourth, investors can be galvanised by ensuring consistent application of capital charges across asset classes and borders. It will be beneficial to avoid large step-changes in charges (the so-called “cliff effects”) between classes of securitised assets that do not differ much in underlying quality.

More granular application of industry standards for the classification of risk would preserve the benefits of those standards while mitigating due diligence problems encountered during the crisis. A single aggregate label for risk tends to act as a credit rating, encouraging investors to shirk on their due diligence. Changes in the rating can create forced buying and selling pressure independent of the variation in investor tolerances for risk. Proposals for a binary (high-low quality) aggregate classification system risk creating a fragmented market with significant pricing discontinuities. Instead, standardisation across individual risk factors (i.e., duration, prepayment risk, collateral fungibility, track record of credit performance, etc.) could mitigate these concerns.

Finally, securitisation markets would be strengthened by fostering a diversified nonbank institutional investor base with a long time horizon. In the case of Europe, for instance, the development of a suitable nonbank investor base will likely require the pan-European harmonization of loan-level reporting standards, documentation standards, insolvency regimes, and taxation treatment of securitisations. Regulatory, institutional, and product design obstacles will also need to be overcome to encourage greater sponsorship from European insurers and pension funds, both of which are underutilized potential sources of patient, long-term capital. These efforts could also contribute to the broader aim of diversifying the sources of financing for the European economy.

So regulators are trying to figure out the best mix of regulation and control to allow securitisation to become more main stream again. We agree significant changes would be required across the securitisation value chain, but are less convinced of the merits to allowing such financial engineering to drive the market. It remains a complex and relatively opaque funding method, designed to leverage capital harder. The risk, however, is that other more exotic alternatives are also being explored and as indicated earlier, more open securitisation mechanisms may be lower risk from a financial stability perspective than some others. The question is, is this sufficient reason to encourage a resurgence?

Via John Kehoe who is doing a great job on

In 1998, following the release of the Financial

While Recessionberg fiddles. From Chirs