US data didn’t celebrate the taper like markets did. Overnight it was mediocre at best.

The Philly Fed missed expectations as well at 7 versus 10 but remains at modest recovery levels:

Manufacturing growth in the regioncontinued in December at a pace similar to thatof November, according to firms respondingto this month’s Business Outlook Survey. Thesurvey’s broadest indicators for general activity, new orders, shipments, and employment were positive, signifying growth, andreadings improved slightly in each categoryfrom November. The survey’s indicators offuture activity moderated slightly but continue to suggest general optimism aboutgrowth over the next six months.

But the talking point has to be housing. Earlier this week we saw a breakout number for housing starts which dramatically snapped a recent losing streak. Also from Calculated Risk:

That is a very big one month jump and I expect it will be revised down somewhat. Still, this is the good news story for the US as building will support growth.

But yesterday we had more evidence that rates are killing mortgage demand from the Mortgage Bankers Association:

Mortgage applications decreased 5.5 percent from one week earlier, according to data from the Mortgage Bankers Association’s (MBA) Weekly Mortgage Applications Survey for the week ending December 13, 2013.

That’s worth repeating, “lowest level in more than a dozen years”. Even accounting for some swing away from the major lenders that is not encouraging.

Overnight it showed up in NAR existing home sales:

WASHINGTON (December 19, 2013) – Existing-home sales fell in November, although median prices continue to show strong year-over-year growth, according to the National Association of Realtors®.

Total existing-home sales, which are completed transactions that include single-family homes, townhomes, condominiums and co-ops, dropped 4.3 percent to a seasonally adjusted annual rate of 4.90 million in November from 5.12 million in October, and are 1.2 percent below the 4.96 million-unit pace in November 2012.  This is the first time in 29 months that sales were below year-ago levels.

US housing is slowing. I expect that by mid year we’ll be seeing virtually no price growth.

If this data had been out Wednesday, markets would have positioned for no taper. But now they are only focused on the Fed. The US dollar rallied modestly, the long bond remained weak but couldn’t break the 3.91% ceiling, the Aussie held its ground but gold was pounded 3% and looks like it’s going to test and probably break its 2013 low: 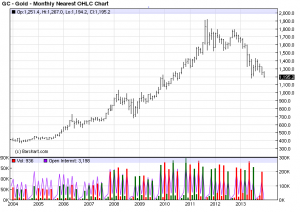 Never has following the Fed been so rampant. The beginning of tapering is the first move towards our next crisis. All crises of the past thirty years in this finely tuned global capital markets machine that we live by have begun with monetary tightening. We’ll no doubt march higher of for one or two years but it will come, like clockwork. If gold capitulates, it’ll be very attractive for the next round of trouble.

So far, the worst year for bonds and stocks ever...

Some eye-popping charts from Deutsche. Bonds

Wall Street: US recession at hand

Nomura wakes in fright. My only issue with this

JPM: Two developments since the May CPI report

US economy comes off the boil

The Daily Shot with a million charts: 1. The