Much of Australia’s planning policies are based on the presumption that the bulk of the population commutes to the central core for employment. As such there is the desire by planners to limit urban sprawl, which is believed to reduce overall commuting times, resource use and pollution, and the need for costly infrastructure improvements, such as new rail lines. Similarly, there has been a growing desire by planners to increase the proportion of housing located along transit nodes, such as train stations, again based on the assumption that most citizens commute to the central core for work.

Ross Elliott, author of The Pulse, has written a great primer questioning this notion. In association with Urban Economics, Elliott has undertaken a detailed examination of ABS Census data to determine where jobs in Australia are located. And contrary to popular belief, they have uncovered that the lion’s share of jobs in Australia’s capital cities are not located in the core, but the suburbs:

A widespread impression exists in the mind of many from the general community through to the media, urban planners and even some senior policy makers that the city centres (‘central business districts’) of our capital cities are the biggest employers in our economy…

The reality, however, is that despite their profile, our CBDs account for a very small proportion of jobs in the economy. Census data for employment has its limitations but even with these limitations in mind, the evidence is emphatic: employment in our cities is overwhelmingly located in suburban locations. 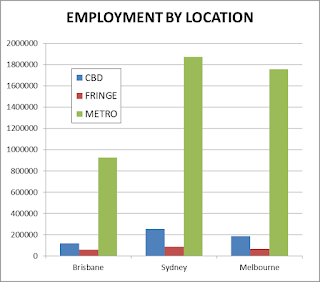 Looking at it another way, in these major centres at least 9 out of 10 jobs state-wide are located outside the CBD/frame, and even across the metro region, about 5 out of 6 jobs are located in suburban locations as opposed to the centre…

…in 2001 the Brisbane CBD’s share of metro wide employment was 14.3%. Over the ten year period from 2001 to 2011, this share actually fell to 12.5%. Including the city fringe areas saw the ratio slip marginally from 19% to 18.8% over the same period, suggesting a leakage of sorts from the CBD to city fringe areas. CBD employment actually grew in that period by 18,793 jobs but what the data reveals is that suburban employment in the Brisbane metro grew faster and by much more – an increase of nearly a quarter of a million jobs across the Brisbane metro region compared with the 18,793 increase for the CBD.

In Sydney, the CBD and inner city areas accounted for 15.1% of jobs in greater Sydney in 2001. By 2011, this proportion had changed little to 15.6%. (Boundary changes by the ABS over the period make CBD-only comparisons difficult). An increase of more than 40,000 jobs in the city area over that time was dwarfed by the increase of more than 200,000 jobs across greater Sydney in the same period. Hence the ratio remained unchanged.

In Melbourne, the CBD share of metro wide employment was only 10.2% in 2001. Ten years later, it too had changed little, reaching only 10.6% (although a slightly larger boundary in 2011 would account for this increase). The inclusion of the Docklands and Southbank precincts over this period sees the ratios move from 12.1% of greater metro Melbourne jobs in 2001 to 14.3% by 2011 – a significant increase of sorts, which points to the impact of these new precincts on spatial employment patterns in Melbourne. But still, the combined areas of the Melbourne CBD, Docklands and Southbank account only for one in every seven jobs across the metropolitan region. Hardly a dominant position…

As for the policy implications of these results, Ross Elliott makes the following salient remarks:

There are a number of quite significant public policy implications that suggest themselves based on this evidence. Public transport policy is just one. Our public transport systems are mostly based on a hub and spoke system (particularly for fixed routes as with rail) where the hub is the CBD and the spokes spread out. This system serves a highly centralised employment model but is notoriously inefficient (and prohibitively costly) when it comes to decentralised employment.

If typically our CBDs contain only 10% to 13% of broader metropolitan area jobs, even with unlimited budgets, the capacity to ever reach high proportions of overall public transit use are virtually non-existent simply because the networks will struggle to take people where their jobs are (overwhelmingly in the suburbs). This reality of employment distribution is something which receives very little prominence in public policy discussions about public transport investment; perhaps it should receive more? If only 10% to 14% of all jobs in the metro region are in the inner city areas, how can we ever expect to set targets much above that for public transit use? It’s a logical and mathematical improbability.

It also means that the billions of dollars needed to upgrade public transit systems will only ever be able to serve the minority of the working population whose jobs are in locations capable of being served by public transport, based on current distribution of employment and the nature of transport networks. And it means that the majority who use private transport to reach their suburban workplaces would be unrealistic to expect the scale of infrastructure investment needed to de-congest the suburban road network. Fixing this conundrum means either a massive re-centralisation of employment around the CBD or achieving rates of population density across urban areas of Australia that are more likely to be found in Asian centres. Neither of which will happen soon.

The other large, daily population movement around our cities, that of students, is obviously also very decentralised and thus not efficiently serviced by a CBD-centric transportation system. Plus, community wide changes of attitude about child safety have had a noticeable impact on the proportion of students who catch public transport, walk or cycle to school. by students.

There is no easy answer in this but setting unrealistic public policy targets for public transport systems in cities where employment is overwhelmingly suburban and not easily serviced, is setting ourselves up for public policy failure and community disappointment.

Another implication that flows from this spatial distribution of employment involves TODs (transit oriented development). The premise on which much TOD thinking is based is that creating housing options around transit nodes such as suburban train stations will allow people more convenient commutes to the inner city and hence relieve road congestion by lifting public transit patronage, among other promised benefits. There will no doubt be a proportion of the population for whom this is very appealing but given the low proportion of jobs actually located in CBDs compared with suburban locations, this level of demand is finite.

Indeed, it may be that as well as creating higher density housing opportunities around suburban train stations in order for residents to commute into the city, we could equally consider creating higher density employment opportunities around suburban train stations, so that inner city residents could commute to suburban workplaces. Is it fair to suggest that to date, the emphasis on TOD planning has been largely on TODs as dormitory residential opportunities for inner city workers, and that this doesn’t align very neatly with the realities of the demography of employment? The evidence points to a broader land use mix for TODs than many have envisaged.

Another public policy implication is both planning and market based. Our CBDs are expensive places for businesses to operate from, but this higher cost base is offset against a number of locational and marketing conveniences along with amenity factors that CBDs have in their favour. However, steeply rising rents, combined with costly car parking may be pushing more employers out of these locations and into city fringe or suburban locations. The evidence is there to support this…

This high cost structure may be encouraging a decentralisation of employment away from CBDs. If this is true, this would mean that costs are pushing jobs into locations that are less well served by public transport. Suburban employment is efficiently served by the private vehicle while centralised jobs in high density CBDs are well served by public transit. Further public policy attempts to raise the cost of business in CBDs (such as cordon tolling – a vehicle tax on the inner city) may only have the effect of further decentralising employment and working against the very claims of its proponents (to encourage more public transport use)…

Planning regulations which typically favour housing density in inner city areas may need to be more flexible in the future if creating housing closer to places of employment is to be a reality.

It’s equally possible that the potential for employment land uses in suburban locations has been inadequately considered by policy makers. It is a complaint of many developers that access to suitably zoned employment land in suburban locations is constrained. Perhaps allowing more opportunities for this to happen would mean creating opportunities to take workplaces closer to peoples’ homes? The same could be said for major transit nodes. As noted earlier in this article, while these have traditionally been thought of as high density dormitory opportunities for inner city workers, the evidence suggests they may equally offer opportunities as high density employment locations for residents living along the network.

Readers often bag Texas for being a sprawling car-dependent wasteland. However, despite having two of the five biggest metropolitan areas in the United States (Dallas and Houston), Texas’ average commute time (24.8 minutes) is below the United States national average (25.2 minutes), primarily because Texas’ liberal land-use laws allow dispersion of both employment and population, resulting in more Texans living nearby work (as opposed to commuting from the suburbs to the CBD).