Another evening of Purchasing Manager Index (PMI) data from the Eurozone. As readers may be aware my major macro theme on Europe under current policies has been the same for quite some time now:

A few weeks ago, when the last batch of final PMI data came out, I also stated:

Actually , to be honest, I am a little more worried about France than that statement suggests. If you have been following my European posts for a while you may remember my warning on the country back in July last year and my repeat of those concerns again in December. In case you haven’t read those posts my basic premise is that France isn’t that much different from some of the periphery nations in terms of its macro economic statistics. As I said:

A quick glance at French fundamentals tells you they are in a similar position as the Portugal, Italy, Greece and Spain. High debt in both the public and private sectors, trade imbalance that continues to grow and a current account that has been in the red for years.

To the last night’s data then… 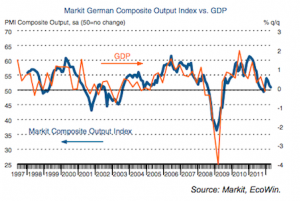 The seasonally adjusted Markit Flash Germany Composite Output Index dropped from 51.6 in March to 50.9 in April, signalling the slowest expansion of private sector business activity for five months. The latest reading was just above the 50.0 no-change mark, thereby indicating only a marginal rise in output levels.

April data pointed to divergent trends between the manufacturing and service sectors. The latter showed some resilience, with business activity rising at a modest pace that was fractionally faster than in March.

Manufacturers meanwhile posted a drop in production for the first time in 2012 to date, and the rate of contraction was the second-steepest since the exit from recession in mid-2009. Reduced levels of output, new orders and employment meant that the headline Manufacturing PMI – a composite indicator designed to give a single-figure snapshot of operating conditions in the manufacturing economy – fell to its lowest since July 2009.

New order volumes across the German private sector as a whole declined for the second month running in April. In line with the trend for output, the rate of new business contraction was the sharpest for five months. Sector data showed a near- stagnation of new work in the service economy, while manufacturing firms saw a sharp deterioration in their new order books. Latest Flash PMI data indicated a faster decline in French private sector output during April. The Markit Flash France Composite Output Index, based on around 85% of normal monthly survey replies, posted 46.8, down from 48.7 in March. The latest reading was the lowest in six months.

The deterioration in the headline index reflected a much weaker performance by the service sector, where activity was down for the first time in five months during April. Moreover, the rate of contraction was the sharpest since last October. Manufacturers reported a further fall in output, although the pace of decline eased during the latest survey period (with the respective index rising from March’s 34-month low).

The Markit Eurozone PMI Composite Output Index fell to a five-month low in April, according to the preliminary ‘flash’ reading which is based on around 85% of usual monthly replies. The index fell for the third month in a row to 47.4, down from 49.1 in March, to signal a faster rate of decline of private sector economic activity. Output has fallen seven times in the past eight months.

Output fell at the fastest rates for five months in both manufacturing and services, with the former seeing the steeper rate of decline.

By country, growth slowed to only a very modest pace in Germany, showing the weakest expansion in the current five-month sequence as weak service sector growth was offset by a sharp decline in manufacturing output. France meanwhile saw output fall for the second month in a row, with the rate of decline accelerating to the fastest since October. Falling manufacturing output was accompanied by a steep deterioration in service sector activity.

The big-two euro countries nevertheless continued to outperform the rest of the region where output fell sharply, down for the eleventh successive month and at the fastest pace for four months. Steep declines in both manufacturing output and services activity were seen in the periphery.

So there you have it. As I said back in march, the Eurozone’s recession has barely begun. Previously the big economies of France and Germany were able to keep the Eurozone expanding overall, but it appears that the troubles of the periphery have finally caught up with the ‘core’. As you can see from the following chart all areas of the EuroZone have rolled back over following a Q1 bounce, with only Germany managing to stay in the ‘expansion’ zone:

Furthermore, the business cycle is now kicking in with employment tanking across the continent:

Overnight the Spanish central bank announced what everyone already knew, that the country was now in a technical recession as the economy contracted 0.4% in the first quarter of the year following a 0.3% fall in the previous quarter. Obviously, given the circumstances of the country, the expectation is that this will get far worse. Overnight the 10 year bond yield bounced over 6% again, and Italian bonds also joined the upwards trend.

Spain will look to auction €2 billion worth of 3 and 6 month bills tonight. Short duration debt has so far remained untouched by the latest turmoil due to the 3 year LTRO’s effect. An uptick in short term yields will solidify the idea that the ECB’s ’emergency’ influence is now fading.

Via public austerity and private zombification of banks, Europe has set course for perpetual recession. This all leads to the question of what happens next. It is now obvious that Spain is spiralling downwards on a similar path to Greece and Portugal as its balance sheet recession continues to suck aggregate demand from the economy. At this point some form of bailout seems inevitable, but from who and of what magnitude? Possibly the IMF? Ironically, after years of demanding delusional budget targets be met, it seems that they will now follow up by demanding less austerity, before they hand over any money.

The IMF is actually in some ways calling for less rather than more short-term austerity in the euro zone. So if the Europeans submit to IMF discipline, it will ironically mean less of a hair shirt.

Not if the ECB has anything to do with it:

Delaying budget cuts will hurt, not improve, economic growth, as such a move would hit confidence in the euro zone ever getting a handle on public debt, European Central Bank Governing Council member Jens Weidmann said on Monday.

The blind leading the blind.

Why are markets ignoring the Grexit?