Coming out of the new year, alongside other risk assets, gold has seemingly reversed its recent falls, climbing above $1620 as risk managers and robotic algo’s bid up risk on sentiment expectations from consensus building and reaction to continued positive dataflow from the US economy as 2012 gets underway.

As always, the sentiment behind gold’s rise is two fold: from both the perma-bulls (risk to the moon! interest rates are zero! everything is cheap!) and the perma-bears (buy ammo! USD going to zero!).

The real question is, has the fall from $1900 to $1560 created yet another temporary bottom in the price of gold on its inexorable rise to $1850-$2000USD per ounce as forecast by both Goldman Sachs and the Australian Government , or even higher to $5000 or $10000 as governments (adopt your best German/Austrian accent here) “print print and print”?

Predictions are hard to make, especially about the future, so this we have to consider the probabilities of either:

Here’s a chart that has been displayed many times before, but captures the psychological behaviour behind “the madness of crowds”:

Does this study match the current technical chart of gold? Heres the weekly chart since the start of the secular bull market way back in 2000: 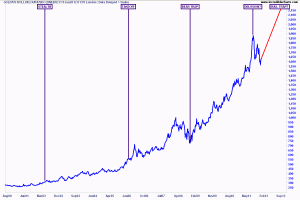 It certainly seems to match up quite well with the “phased bubble” sequence we’ve covered here before on MacroBusiness. The recent correction – just shy of the typical 20% number used to characterise a bear market in any asset, also fits the “bull trap” meme.

The “return to normal” and capitulation phase is is a very complex and debatable subject, usually hinged on the notion that lower interest rates are fuelling inflation and therefore gold must rise until ZIRP (admitted by the Fed to last at since until 2013) is reversed.

Unfortunately, this thesis conveniently forgets that outstanding private (and some sovereign) debt and equity (mainly house prices, but also stocks) are being destroyed by deleveraging and outright default.

One of the world’s most successful hedge fund managers, George Soros, has recently sold almost all of his funds shares in a gold ETF, calling it the “ultimate asset bubble”, but ever flexible, noted that buying at the start of the bubble was always a rational idea.

The consensus from the mainstream analysts and fund managers is the contention that the shiny metal is merely overbought and undergoing an orderly correction before resuming its upward trend – a “return to normal”.

Luckily, the technical charts are quite clear on gold, making it a relatively easy risk asset for trading or investment purposes, particularly if you’ve been long for the last 11 years!

The weekly chart above shows that gold has clearly deviated away from the simple 3 year trend line since the GFC. This is providing ammunition for the sideways trading range/continued correction that deviates slightly from the consensus “gold to the moon”. 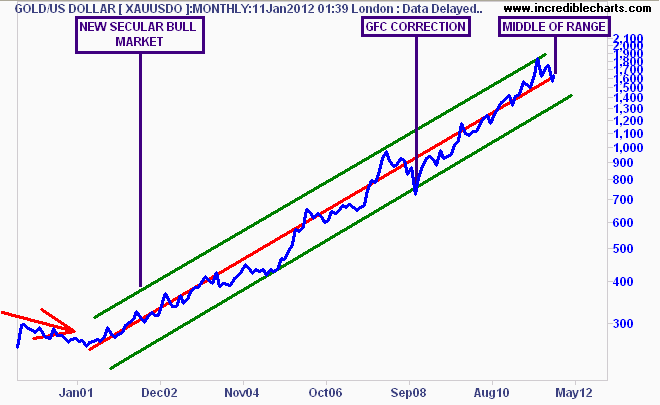 But the monthly chart above confirms (for now) the consensus thesis: gold remains in a secular bull market, albeit going sideways, but moreover is in the middle of its trend channel.

This implies that the bull market in gold can still continue, as it did post-GFC, even if the price falls to ca. $1400-1500USD an ounce.

For those who discount the “phase” theory of bubbles, and/or that the return to mean implies continued USD currency depreciation into the decade, such a fall would offer a great opportunity.