The S&P/ASX 200 jumped over one percent at the open this morning, and advanced to 4526 points, up 52 points or 1.15%. Is this on speculation of a “positive” vote in Greece on austerity, or the Senate Committee rejection of the MRRT, or a rebound rally amidst the growing bearish conditions?

It’s mainly green across the board with most sectors advancing, except XTJ (Telecommunications), with XEJ (Energy) advancing over 2%. The four major banks are providing most of the gains, with ANZ up 0.84%, CBA up 0.79%, NAB up almost 1% and WBC up 0.6%. (Note: my short term trading system is long CBA and NAB, WBC next to trigger and ANZ lagging)

In other ASX200 stocks, resource stocks are rebounding, Atlas Iron (AGO) leading the charge up almost 7%, followed by Sundance (SDL) up nearly 5%. CSL is being bid up strongly, up 2.8% to $32.45 (recently upgraded by Macquarie).

Daily Chart
The daily chart shows how the current price activity is forming a bottom around the low point of the Japanese/MENA lows of March but with no clear (short term) direction. However, there are 2 things to note: the current price will likely close above the closing low of the March lows and is threatening the top of the downtrend channel as noted. The 4500 points level could switch to support in the event of a rebound rally on the back of (another) Greek bailout. 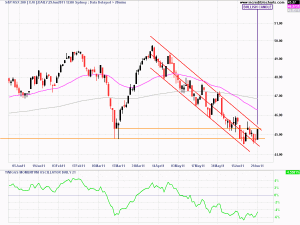 Michael Hartnett at BofA, conductor of the bust.

While there was a sea of green across Australian