Due to the large timeframe, I’ve plotted it logarithmically below: From December ’61 to February ’82, the S&P500 moved from 72 points to 113.7, which equates to a measly 2.3% annualised return over a 20 year period.  Now that’s a sideways market.  I’d wager a long-term Australian index would show similar behaviour given how correlated the Australian and US markets were during the 20th century.

So long-term sideways markets can, do and will occur.  However, one thing to keep in mind when looking at a period like ’61 to ‘82 is that the index (in this case the S&P 500) is not a business.  While overall the share market went nowhere, individual businesses were still started, succeeded or failed, new products and services were invented or discarded, economic shocks came and went, wars were waged and Jimi Hendrix rocked our world.  All these things affected individual companies and their share prices (maybe not Jimi), so volatility and hence buying opportunities still existed.  It just happened at a micro scale rather than in big mass market movements.

Well, the ASX200 for the last five years is shown below: The trading types out there would say the market has traded “in a range” between 4,000 and 5,000 since about September ’09.  They may even hop onto a charts program and draw nice lines like the one below from Incrediblecharts (tips hat to The Prince): 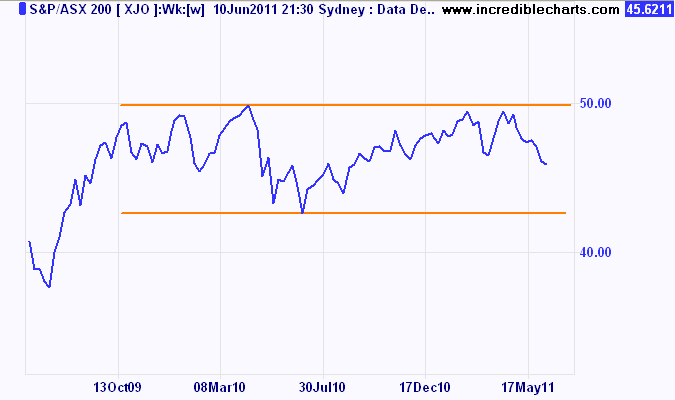 As a value investor I think about the macroeconomic fundamentals and the possible risks that lie ahead rather than the lines on a chart.  On the horizon I see the following risks:

On the opportunities side I see:

The Australian economy seems to be in a meta-stable state i.e. a precarious position that would require just one incident to push it into a new direction.  The Aussie consumer is cautious but not panicked because unemployment is low.  Interest rates and the RBA’s jaw boning seemed to have cooled the non-resource sectors of the economy in order to make way for Futreboom!  So far so good, given the impact the GFC had elsewhere.

However, if any of the aforementioned risks create a big shock – whether it’s declining commodity prices, higher credit prices or higher oil prices – I believe the Australian economy will be pushed in a new direction, most likely downwards.  And equities prices will follow.

So my prediction is a sideways/muddle through market until something big happens.  Sort of like saying the sun will rise tomorrow, but it’s as good as I can give you without channelling Nostradamus.

How does this change the Value Investors approach?

If a sideways market is on the cards, many finance types will advise looking for defensive stocks.  Which is the same as saying “chase them dividends!”  Defensive stocks are typically your blue chips with high or consistent dividend yields (the big 4 banks, Telstra, BHP with the current dividend policy).  These are in contrast to your “growth” stocks – typically smaller businesses that reinvest a lot of their earnings in order to “grow the business”.

While seeking out high dividend stocks may seem like a good idea in uncertain times, investors can often miss out on better returns in the long run because they neglect those companies that are expanding their equity base.  This can be shown by a simple example with two companies – a “Dividend Company” which gives out all its earning as dividends and a “Growth Company”, which retains half of its earnings:

Which company would you rather own?

It’s a simplified example (no buy backs/raisings, consistent ROE) however the principle still applies to all businesses.  Given the choice between these two companies, a value investor should always pick the growth company.  No matter what kind of market you’re in, if a company has increased its equity base and earnings per share, you can expect the share price to follow.  This may take a while in a sideways market, but you can rest assured the earnings are increasing as time goes by.  If the market continues to underprice the growth stock, then the value investor would actually buy more.

So if a sideways market is upon us, chasing dividend stocks doesn’t always produce the best outcomes.  Growing a company’s equity base means the earnings will also grow, assuming ROE is maintained.  That’s a big caveat, but looking for companies with high ROE, low debt and a durable competitive advantage goes a long way to ensuring you pick a winner in any market.  The likes of Woolworths, Cochlear and Cabcharge would tick most of these boxes.

In this week’s Equities Spotlight article we’ll examine another Australian-listed company that fits the bill.  In the mean time, I highly recommend The Prince’s article examining the investment outcomes of Telstra (a classic dividend stock) and comparing them with Cochlear (a growth stock).

Disclosure: The author is a Director of a private investment company (Empire Investing Pty Ltd), which has an interest in some of the businesses mentioned in this article.  The article is not to be taken as investment advice and the views expressed are opinions only.  Readers should seek advice from someone who claims to be qualified before considering allocating capital in any investment.

Risk sentiment stabilised overnight only because

When will the bear market end?

Michael Hartnett at BofA leads us off: Tale of