The Future Fund announced recently that is has reduced its holding in Telstra (TLS) to below 5%, and is still selling.

Future Fund, I salute you. TLS is still a telegraph pole stock – as in, any sane, rational investor shouldn’t touch it with a ten foot or even a telegraph pole. In this post, I will go over why this still remains the case, even if the share price is starting to rally after this “good news” or on speculation of the positive impact of the NBN may have on future earnings.

Past performance is a reliable indicator

First, I want to remind readers of where TLS has been. I won’t go back to the PMG or Telecom days (Gen Y readers are now scratching their heads reading this on their iPad2’s), but to the post Howard “great public flogoff” era. And I’m going to compare it with what I believe is the best public company in Australia today – Cochlear.

Sol Trujillos very poor capital management of Telstra is clearly evident in the following figures (taken from an article I wrote in mid-2010):

This is a company that routinely gets high-30% Return on Equity (ROE) – an excellent return on investor’s capital. But somehow, it has managed to destroy $11 billion in capital since publicly listing. The best way to illustrate this is comparing book value per share growth. 10 years ago, Telstra’s book value per share was $1.03. It remains basically the same today. In contrast, COH started at $1.07 but is now at $7.75 per share.

Cochlear’s paltry dividends, because it actually reinvests its profits to create better products and services (are you listening Telstra?) have increased from 41c to 200c a year. Whereas TLS have increased their dividend from 19c (through a high of 40c) to 28c a year since 2006 (the last four years there has been no dividend growth).

How has this performance been reflected in the market? The charts below are from 1997 to 2010. 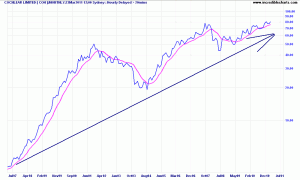 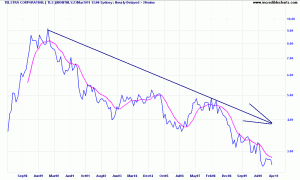 Is this poor performance likely to continue – both market price and management? It has been often said that even the best management can’t save a poor company, and in Telstra’s case this appears evident. The future risks facing TLS are immense: regulatory hurdles, the NBN structural separation, the post-NBN retail competition environment, new technology development, international competition. I think the only thing in Telstra’s favour is an irrational investor surge of interest because of the high dividend yield and the spin around the post-Future Fund selloff.

Probable rally coming into mid-year
In the short term, Telstra has provided FY11 earnings (EBITDA) guidance to decline in the high single digits (Goldman’s Christian Geuerra reckons 10.5% decline) and for the dividend to remain unchanged at 28c.

In some good news for Telstra executive option holders, the stock will be reweighted on June 17 by Standard & Poor’s, the benchmark/index ratings firm, from which almost all active fund managers track their holdings. A clear market behaviour is evident whenever a stock is upgraded to or downgraded from the S&P/ASX200. In the former, fund managers are bound by their investment strategy to allocate additional capital to the new entrant, and in the latter, to sell off (i.e go “underweight”) the laggard.

With Telstra liberated by the Future Fund action, this means 100 per cent of the stock will be included in the ASX/S&P 200 index up from around 89.4 per cent currently, which should mean an increased demand from both the active fund and index fund/ETF managers. Macquarie estimates that 60 million more shares will be bid by the various managers, which should at least temporarily lift the share price.

And for an insight into behaviour psychology and a lesson for dividend-hugging bank investors: even though Telstra’s book value per share, number of shares and Return on Equity has not changed, and the dividend yield remains very high, the average annual P/E ratio has dropped from 19 to just over 10.

Telstra is truly the Dog of the ASX200. And it needs to be put down.

Disclosure: This blogger owns Cochlear shares in his family self-managed super fund and investment company. I also regularly trade Telstra in my capacity as a full time equities trader (mainly from the short side). Investors should seek advice from someone who claims to be qualified before considering allocating capital in any investment.

A fairly solid session for Asian stocks with