The primary purpose of the capital raising was to shore up the balance sheet in the midst of the GFC, with borrowings per share dropping sharply from $2.32 in FY08 to $0.62 by the end of FY09.  Despite this deleveraging, FY10’s NPAT of $140m is still very small compared to current debt levels of $994m. The issue price for the raising was $3.10.  This is in stark contrast with two share buyback plans conducted during the good times of FY05 and FY06, where the buyback prices were $7.75 and $7.01 respectively.

Despite recent deleveraging and increased demand for their products, BSL has continued to struggle since the GFC. Large cost increases for iron ore and coal, as well as the strengthening Aussie dollar, are weighing heavily on profitability of the Australia operations.  This is shown in the EBIT segment split below. 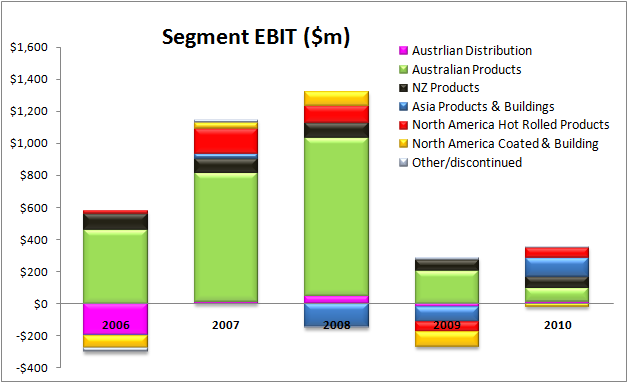 The half-year results for FY11 indicate a $49M dollar loss for the six months to December 2010.  Contributing to this loss was a $200m write down due to “exchange differences on translation of foreign operations”, which further highlights BSL’s sensitivity to exchange rates.

Bluescope’s steelworks at Port Kembla has a maximum production capacity of 5.2mt of steel per annum.  Using an estimated emissions intensity of 2.7t CO2 per tonne of steel, Port Kembla could emit up to 12.5mt of CO2 per year.  Assuming a carbon tax set at $20per tonne of CO2 with 95% returned via a compensation package, BSL would be liable for $12.5m in carbon taxes at full capacity.

The resumes of the board members read like a roll call for corporate Australia.  Woolworths, Brambles, Worley Parsons, BHP and the RBA all get a mention.  Most of the directors have been in their roles since 2002.

Short-term remuneration made up just under one third of total remuneration in 2010.  The 2010 annual report indicated bonuses had been cut back to “align the experience of management with that of shareholders”.  Given the base pay/bonus split in FY09 was approximately 50:50, management seem to be cognisant of shareholder expectations during years of poor performance.

Management appear to be following a strategy of expansion in growing markets and consolidation of their Australian assets.  Given inputs costs and the Australian dollar are beyond BSL’s control, this seems to be a prudent approach in the short term.  However, the correlation of high commodity prices and a high Australian dollar will prove very challenging if maintained beyond the medium term.

Bluescope is a major Australian industrial company that is struggling with current macroeconomic conditions.  High prices for its input materials and a high Australian dollar are making it difficult for BSL to remain profitable.

Given its poor ROE record and lack of pricing power, Empire Investing does not considers BSL an investment grade company.

It is difficult to predict future earnings for BSL, especially given the recent half year announcement of a $49m loss.  However, assuming an average ROE of 9%, equity per share of $3.00 and 10% reinvestment, we value BSL at $1.83.

This valuation is considerably lower than the $2.24 stated in my article earlier in the week.  However, after closer examination of BSL’s sensitivity to interest rates, as well the challenges posed by macro conditions that are beyond its control, we consider $1.83 to be a more accurate representation of current value.

We do not consider BSL investment-grade, hence we will not provide a maximum buy price.

Disclosure: The author is a Director of a private investment company (Empire Investing Pty Ltd), which has no interest in the businesses mentioned in this article.  The article is not to be taken as investment advice and the views expressed are opinions only.  Readers should seek advice from someone who claims to be qualified before considering allocating capital in any investment.