Most commentators and analysts focus on the hard commodity story for Australia: iron ore, coking coal and metals like copper and aluminium. International pricing forces, driven by demand in China and India and exarcebated by easy monetary policy across the developed and emerging world is having a similar affect on the so-called soft commodities driving food prices to record levels.

Food-price inflation has climbed to the top of the international political agenda after hitting successive record highs this year. The World Bank estimates 44 million people may have been pushed into poverty by the price increases, and aid agencies warn high food costs threaten millions more.
“High and volatile food prices continue to represent a major risk for poor people who spend up to 80% of their weekly income on food,” said Luca Chinotti, food policy adviser for Oxfam.
Wall Street Journal May 6th, 2011

Have Australian companies taken advantage of this “fundamental” price change or are they opening themselves to risk of a retraction in soft commodity prices?

Opportunities and Risks
The major risk facing the agricultural sector is obviously weather. Poor weather conditions in the northern hemisphere have been the major reason behind price increases (reduced supply). In the short term (May to July), European countries need good falls of rain to meet estimates, whilst the Ukrainian and Russian crops are likely to do well.

Some analysts see the potential for 30-40 percent declines in corn and wheat prices on good weather. This will take the sails out of the recent price gains:

Offsetting these risks are the opportunities driven by increased demand due to population growth and increased living standards in the developing world.

In summary however, any commodity based industries is still exposed to the vagaries of price volatility, weather and speculative demand/supply dynamics.

Sector Overview
Because of massive consolidation through mergers and subsequent takeover, there are not many listed companies involved in the grain sector. The Australian Wheat Board (AWB), formerly a poorly run government monopoly was privatised and acquired by Agrium in Canada. ABB Grain, Australia’s largest agribusiness, was taken over by Viterra in 2009.

The major standout – by default – is Graincorp (GNC). 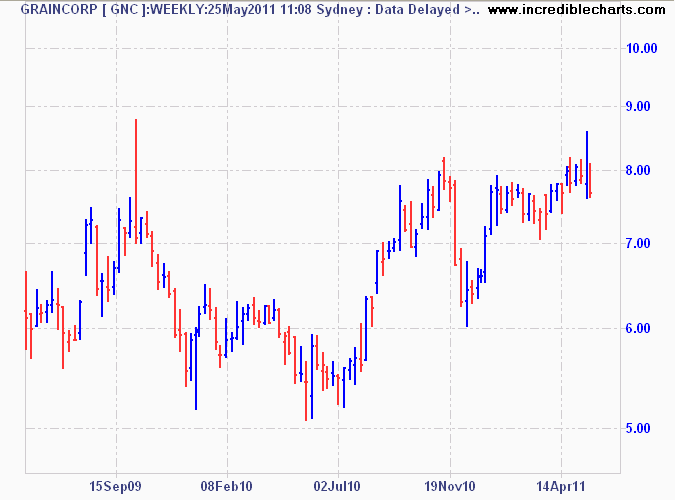 Graincorp’s share price has roughly followed the rise in wheat futures. GNC is also under speculation of a takeover by Viterra.

Q Continuum will be providing a detailed company analysis of GNC later this week, also to be published on our website.

Other stocks include Nufarm (NUF) which has exposure through its crop protection business. Other unlisted entities include the CBH Group – a wheat growing co-operative and PrimeAG, a relatively small private grower open to limited investment.

Overall, there is not much choice in this sector. Furthermore, the risks involved in investing in commodity-related businesses, without a clear competitive advantage (through dominant pricing power and/or monopoly control) are too high, even though the opportunity for increased gains due to rising fundamentals and continued northern hemisphere bad weather are tempting.

Next week’s theme will be debt servicing and retail debt companies.

Disclosure: The article is not to be taken as investment advice and the views expressed are opinions only. Readers should seek advice from someone who claims to be qualified before considering allocating capital in any investment.