Graincorp (ASX Code: GNC) has posted an increase in FY11 net profit of 66%, in addition to lifting FY profit guidance to $145 to $165 million, a $30 million increase from previous guidance which put the figure between $115 and $135 million.

The main reason behind the increased result was a “record eastern Australian winter crop harvest, high grain receivals, an increase in the tonnage of grain marketed, and improved productivity”, according to Graincorp chief Alison Watkins.

Empire Investing has provided a full valuation of Graincorp below, with an updated valuation based on the new profit figures and forecast growth. Graincorp (GNC) was founded in 1916 as part of the NSW Government’s Department of Agriculture. It led the development of Australia’s bulk grain handling system and in 1992 was one of the first government organisations to be privatised.
Today GNC operates seven bulk grain export terminals with the capability of hauling up to three million tonnes of grain annually. It has more than 250 country elevators with a total grain storage capacity of up to 20 million tonnes, with facilities spread between Mackay (Qld) and Portland (Vic). It handles 60% of the grain from Australia’s east coast and also markets/trades grains itself in the international market.

In addition GNC recently purchased several foreign malt-producing businesses in the US and the UK. These businesses acquire barley for processing into malt, which is then on-sold for use in brewing and distilling. The acquisition of these “maltsters” has nearly doubled the size of GNC and turned it from a grain handling business into a malt processing and grain handling business. This has both diversified GNC’s revenue base and reduced its reliance on Australia’s variable weather patterns.

Financials
Graincorp has had mixed success in turning a profit over the last 5 years. In both 2007 and 2008 GNC recorded a loss of approximately $20m due to the severe drought experience on the east coast of Australia. Since 2006, return on equity has average only 3.7%, with a high of 12% in FY09 and low of -5% in FY08. 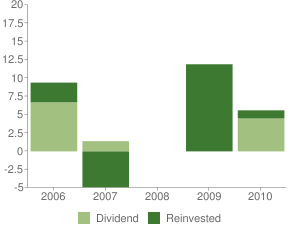 Return on Equity for last 5 years

Equity per share has decreased from $9.98 in FY06 to $6.47 in FY10, with the largest drop occurring after the loss in 2007. However, in FY10 intangible assets increased from $0.35 per share to $2.03 after the purchase of the malting businesses, which required a capital raising of over $500m. With earnings per share of $0.28 in FY10, it would appear GNC has paid excessively over the book value for the US and UK businesses. 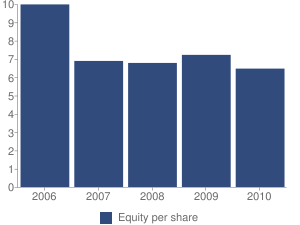 Borrowings have decreased from a pre-GFC high of $8.04 to $1.67 in FY10. This deleveraging was achieved by a capital raising in 2009 to “de-risk” the balance sheet and ensure banking covenants could be met in the face of a continued drought.
In terms of revenue sources, the following graph shows how dramatic the impact of the malting businesses is on GNCs revenue:

Management
Graincorp’s current management line up makes for impressive reading, with extensive corporate experience in retail, agriculture and food processing. CEO Alison Watkins has held a number of high-profile roles including CEO of Berri Limited and a non-executive directorship of Woolworths, whilst current RBA board member Don McGauchie fills a non-executive role.

Management has recently made changes to the executive remuneration scheme after concerns were raised by shareholders at the 2010 AGM. In particular, a share retention plan that matched short term bonuses with a future equal equity stakes in GNC has been discontinued. In its place is a longer-term deferral plan that uses ROE and share price performance as KPIs, which is a very positive development.

Management has seen a fair amount of change in recent years, with the average executive tenure being 4 years. The CEO was appointed in 2010, whilst the Chairman has been in his role since 2005

Summary
Graincorp is a large, established Australian grain handler that has now become a player in the global malt industry. To date GNC has provided very little return on equity and struggled with losses and debt through the drought and GFC. After a series of capital raisings, debt is now lower but intangible assets have increased substantially after the purchase of the US and UK malt businesses.

Whilst the current management team may yet turn the business around, Empire Investing still considers GNC a “Poor Company” due to a poor Return on Equity.

Valuation
Using the current equity per share of $6.98, and based on mid-range profit guidance of $150 million for FY11 – which increases ROE to approx. 11-12%, Empire values GNC at $6.45, a substantial discount to the current share price.

Disclosure: The article is not to be taken as investment advice and the views expressed are opinions only. Readers should seek advice from someone who claims to be qualified before considering allocating capital in any investment.

It is clear that the stock market stress I have

Wall Street is broadcasting correction mode as we