The S&P/ASX200 is down over 1 percent or 50 points to 4920 (update: 1pm EST) after weak overnight action. The V-shaped rebound is slowing down, as exuberance gives way to reality. 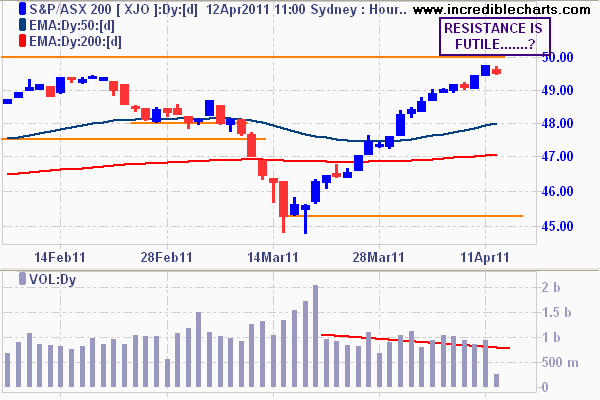 ANZ: uptrend is not slowing down! Consensus rules – banks are back.

Cochlear (COH): small dip in the AUD and buyers have stepped in. Disclosure: I freaken love this company, but it is approaching value

Commonwealth Bank (CBA): as I said banks are back. Puts are getting cheaper too…… 😀

Newcrest (NCM): come back to earth as gold consolidates, but good time to BTFD

OZ Minerals (OZL): Although “Good uptrend, far away from resistance” tighten stops ($1.58 or so). Reversal possible.

Ramsay Health (RHC): still trying to break through resistance at $19 – reverse position if it fails as volume is slipping.

Rio Tinto (RIO): “about to hit long term resistance at $89” – indeed, but if you believe in commodity prices (what else is there to believe in?) BTFD .

Westpac (WBC): last and probably least, WBC has gapped up higher on the open as the consensus takes hold of the “cheap” bank stocks.

Alumina (AWC): market’s not liking the good JV result with Alcoa – down 4%. End of short term trend for now.

BHP-Billiton (BHP) has failed to beat its all time high, even though arguably is a better proposition than 3 years ago. Waaaay overbought. 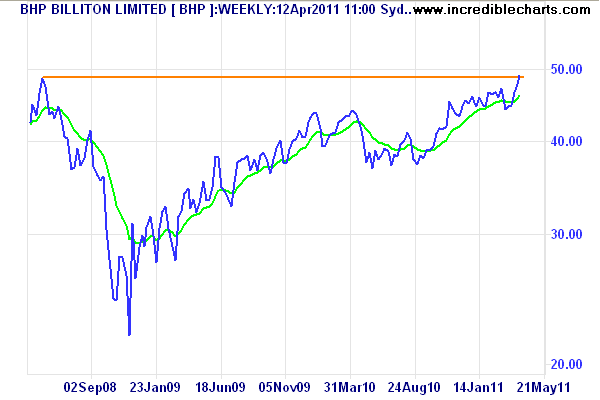 Fortescue Metals (FMG): market not happy with fall in FMG output for March qtr. Down almost 2%

JB Hi-Fi (JBH): another favourite, but the market is digesting its recent buyback plan. Oscillating around point of control at approx. $19.20 or so.

TEN: another dog comes back to its kennel after a rebound rally, but still in sideways bearish stance.

WAN: marriage complete, but new entity not yet listed, so no life here – stay away

Woodside (WPL): That was fun – where to from here? Down 1.7% (nothing in scheme of things) but within its trading range. Again, faith is needed in commodity prices to step on this one.

Aristocrat Leisure (ALL): this family walks in to a ……closed below support yesterday, tanking this morning. Poker face?

Aquarius Platinum (AQP): head and shoulders pattern has completed its formation: watch for a close below $5.40

Billabong (BBG): approaching support at $7.30 – time to cover if bounces off this.

Bluescope (BSL): down another 1% this morning. Short continues.

Computershare (CPU): resumes its medium term downtrend. Some support at $9, but not surprised if it falls further.

CSR: yesterday “watch for action around $3.20 if support comes in to buy up” – tail is long and is oversold. Cover if close above $3.22 or so 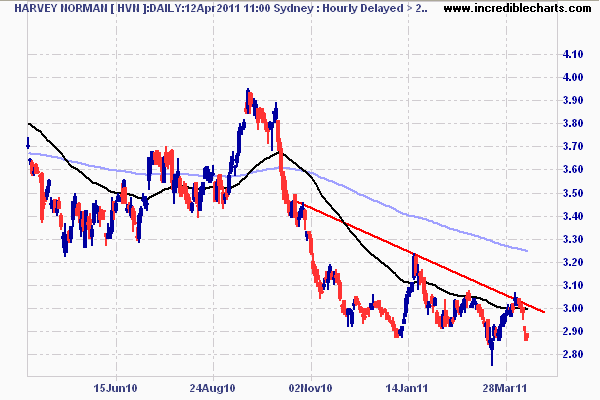 Hardly Normal: because you should pay more

James Hardie (JHX): I said “Some support below $6, but watch out if failed” Its failed….

Macquarie Group (MQG): still falling, but Rate of Change is slowing down – remember support at $34..

Onesteel (OST): returned to medium term downtrend, down another 2%

Tabcorp (TAH): Speccie based on pokies “reform”? Support at $7 is target.

Westfield (WDC): still not promising – support at $9 will be likely target.

Disclosure: The Prince is a full time equities trader, running a personal account. I may have positions (long and short) in some or all of the securities mentioned above. This post is not advice or a recommendation to buy or sell. Do your own research and consult an adviser before allocating capital.