Another strong week for the bulls in the AUD with an overnight high of 1.0978 and a close just a few ticks lower. It was a week where a combination of factors contributed to the Aussie’s strength with the USD weakness we highlighted last week and then again in my post Thursday. 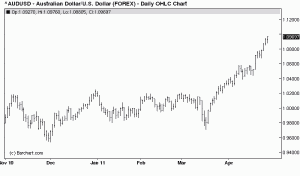 So it was that the AUD and the CHF (Swiss Franc) made new modern day highs against the US Dollar. Even the EUR,  troubles in the periphery and the looming Greek debt haircut and all, is back up near 1.50, where it has no right to be.

The key here is that currency traders are always focussed on relative bets and at the moment the driver of these relative bets is not just an overall weak US economy (otherwise how could EUR and GBP be strong) but the outlook for interest rates. In Australia, Switzerland, Europe and elsewhere, central banks are signalling a continued bias to tighten, while in the US Ben Bernanke’s discussions during the week left us in no doubt that althoug QE2 is ending, it is nowhere near ready to reverse course. Indeed the GDP data released this week for the US just highlights to ongoning parlous nature of US Economic growth.

So the AUD rallies.

But its just not USD weakness that is driving the AUD, although it is probably the dominant driver at the moment. The AUD is also stronger against the EUR reflecting the fact that all other things equal traders and investors still see Australia a decent destination for their investment dollars.

Interest Rates – Higher than expected CPI gets the RBA back in the frame and although rises are still priced as some months off by the market this highlights that through time the Aussie’s yield pick up will remain large. We’ll see what Governor Steven’s says this week after the Board meeting.

Commodities/Global Growth – Commodities are still rising on the back of USD weakness and still supporting Aussie in a scary positive reinforcement loop. Anything that threatens commodities will threaten the Aussie but not at present. On the growth front the markets continue to ignore global headwinds preferring to focus on the here and now.

Investor Sentiment – This benign environment of relatively lax Fed policy and still positive economic growth oultook (don’t think too hard, some of these drivers appear either incongruent or irreconcilable – that is the mistake of people who lose money in FX) is keeping equities bid and overall risk appetite buoyant. Although I’d note this Aussie strength feels like a crowded traded and word on the street is that “real money” investors are starting to baulk at buying at these levels.

Technicals – Overbought in the short term but Fibonacci projections (my single favourite indicator) suggest the 1.12 region. A pullback would find good support initially around the 1.06 level. I’ll do a proper technical snapshot on Monday.

USD – No need to flog this horse again, the Fed’s own measure of the US TWI is at the post Bretton Woods low. Even the Mexican Peso is rallying against the USD. In terms of DXY (USD Index – which is heavy Europe) we are a few percent away from 20 year low and these two facts help explain why Tim Geithner said that the US still believes in a strong dollar. Theoretically true but practically on the back burner for a while. On this front the CNY (Chinese Yuan) is at its strongest against the USD since 1993.

So support for the Aussie from an investment fundmanetals point of view remains strong and even though it feels overbought support will come back on any non-China related selloff at lower levels.

Asian stock markets are holding on to minor gains

Rush and and buy it because it's more sound even

Another mixed night on risk markets as Wall