Well that didn’t take long – the ASX200 has corrected again this morning, with an intraday level at 4714 points. Readers may have noticed that I am still wrong about a possible rally!

In my last regular weekly analysis I did mention however:

But basic charting analysis suggests a more bearish stance: a classic head and shoulders pattern is developing, with a neckline at approx. 4750 points.

Bears need to watch for the index to close below 4800 for the week, with a correction underway if it cuts the 4750 neckline. Bulls need to see prices shrug off recent bad news and bounce off 4800, with a new rally confirmed on a breakout above 5000. 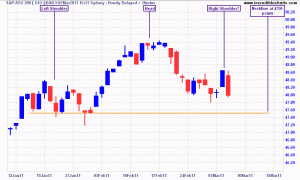 And this is the chart as of today: 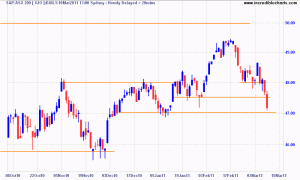 Neckline broken - next support at 4700

The right “shoulder” has now dropped through the neckline at 4750 – and prices are coming close to 4700, the next support level. After that there is strong support at just below 4600 points.

What caused all this? Well BHP has broken its medium term trend, with next support at 44.60 or thereabouts. A break below this would warn of a wider correction. The four major banks continue their correction, but are finding some support at current prices (except CBA which continues downward).

RIO is a major culprit – having dropped from $89 to $81 in the last couple of weeks. Yesterday RIO broke through long term support at $83. 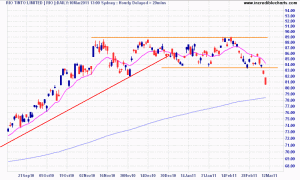 Is this correction just a technical shakeout as fund managers re-balance, hedge funds play around the edges or Mum’s and Dad’s selling their now ex-dividend stock?

Or is it more fundamental in nature? Like the AUD, a lot of volume for the ASX comes from overseas – major overseas funds invest here because, let’s be frank, it has been widely perceived that Australia has ridden through the GFC (called The Great Recession everywhere else in the world) with barely a scratch.

An article in the Oz “Six good reason to avoid local stocks” may be on the money:

FOREIGN fund managers are keeping well clear of Australia for six key reasons, which will depress returns for the foreseeable future.

Fidelity’s Australian portfolio boss Kate Howitt is not bearish about the entire market, but says offshore reluctance is easy to explain.

The key reasons are: a vulnerable currency; the relative benign impact of the GFC means there is little leverage to growth; a housing market seen as overpriced and a relatively stretched consumer; paucity of technology exposure which robs the market of a key early recovery story; sovereign risk in relation to the mining and carbon taxes; and the domination of mining amid the Middle East unrest.

Late last year the big switch was from emerging markets to developed markets, leaving Australia caught in between, but Fidelity is still maximum bullish on developing markets.

It’s not just the government that worries foreign investors; they can’t see any side backing business.

BlueScope is down 18 per cent since February 18, underperforming the market by 15.5 per cent in the wake of the carbon tax, but the Liberal Party has no offering. Contrary to popular wisdom, business wants a carbon price and certainty.

In all the Middle East is a negative for all stockmarkets right now but outsiders can’t see much at all to get excited about Australia right now.

Usually around 2pm AEST the market moves again, so let’s see what happens with the rest of the day. A weekly close below 4750 does not bode well for my “short term rally thesis” – but for the more adventurous investors with knowledge of “Very Good” companies, it may be a good time to snap up a bargain for the long term.