Investing and speculating in gold is almost as emotive a subject as residential property, so I’ll try to keep this short and sweet.

I treat physical gold as a “Type Zero” security asset, a small insurance hedge against financial instability – a “Minsky Metal”. (I will publish an article regarding my research into the “Minsky Metal” and how I treat capital assets differently in the future)

Physical gold may have a place in a future reserve currency or SDR (most likely alongside a basket of other currencies and goods) if the modern monetary system changes, and if so, the intrinsic value of gold should increase, but this is nothing more than speculation.

When it comes to the derivative of the shiny physical stuff, I throw out all these notions and see gold for what it is: a speculative commodity/currency. I trade gold futures from time to time (only because its behaviour is very similar to my equities based trading system) and have studied its long and medium term price behaviour, correlated against other risk assets.

Most of the time, in a flight to safety during a dip or correction in a secular trend (or the current bear market rally), it is dumped alongside other risk assets as speculators move back to the USD. Interestingly, this hasn’t happened as harshly in recent “safety” events, which may show an internal resilience to the gold “bubble”.

There are (worrying?) signs that gold may be moving into the “Media Phase” of the classic bubble chart by Dr Jean-Paul Rodriguez, as seen below, which may go someway to explaining this slightly different behaviour.

Mad Jim Cramer, the notorious CNBC shock stock jock, has proclaimed that everyone should have gold in their portfolio. This is usually a deathknell for stocks and other assets (although to give Cramer a break, he has been right most of the time during this crack-up boom in US stocks – but then everyone thinks they’re a stock-picking genius when everything is going up.)


Rotten Apple (Macro’s man in Manhattan) has reported before about the bombardment in the US media for retail investors to pile into gold. The Bullion Baron (my favourite Australian gold blogger) has also talked about gold’s rise in the Australian/Asian media.

The definitive main in Australian “mainstream” media, NineMSN has recently published an online article (h/t to Burbwatcher) claiming that “gold could hit $US1600 an ounce”, although the story is made up of a series of quotes from a very bullish gold investor.

The Bullion Baron (my favourite Australian gold blog) has talked about this new media previously.

From Media to Public
What makes this seemingly new media phase different to the even more bullish “public enthusiasm” stage? Similar to other speculative assets like property, you need to take care of signs that the bubble has taken hold with the crowd including:

Tin-foil hat conspricacy theorists aside, have you heard or seen any of the above in great quantity or broad reach yet?

From Bull to Bubble
I contend that for a bull market to transition to a bubble, the uninformed (and greedy) crowd has to move in and bid up the prices, using “fundamentals” to justify their fear of “missing out”. This clearly occurred in the NASDAQ dot.com boom and the US housing boom of the last decade, and its peak has probably occurred already with the Australian housing bubble (although I can only hear a hiss, not a pop – I’ll let others work that one out). 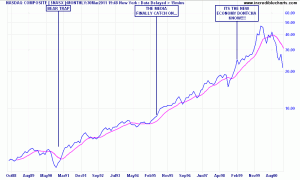 TEOTWAWKI – and I feel fine…
Just to be clear (I’m beginning to sound like John Cleese in Life of Brian) I contend that physical gold is not a speculative endeavour, as only a very small minority of people actually own physical “Minsky Metal” although its price is quoted daily at the end of our nightly news as if we all have a few ounces at home.

However, like all other risk assets, gold trading in non-physical form is purely speculative and there are clear signs that this speculation is spreading. The memes of “higher inflation” and continued ZIRP by the ECB, BOE and The Fed could provide the turning points for the crowd to step in and bid up gold to new heights, thus justifying the bubble itself.

Participants and non-participants alike need to observe the careful dynamic of psychological behaviour of bubbles and manias and take defensive (and possibly profitable) actions where necessary.

Disclosure: Regular readers know I’m a full time equities trader, but I also trade gold from time to time (usually long but sometimes short). I also own physical gold, but only as a “Minsky Metal”, and only as a small part of my portfolio. My investment company does not trade in, nor invest in gold or gold mining companies.