An interesting article was posted on Mineweb earlier this week comparing the performance of Gold over several currencies. The 4 currencies it was compared in were the US Dollar, Renminbi, Indian Rupee and Euro. With the growth of three tied so closely it was almost just a comparison of the US Dollar and Euro pricing.

Here is a chart that provides a look at Gold pricing in a broader range of global currencies. 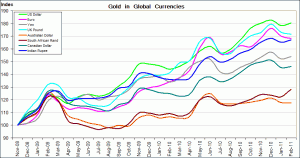 The index starting point is Gold’s monthly low in USD as the price collapsed in late 2008. The monthly figures were downloaded from the World Gold Council (.xls file).

There have been a few dips along the way but Gold has increased in all currencies over the past 2 years.

The largest rise has been in USD (this would be in part due to the starting point). The Gold price in Pounds and Euros has also seen comparitive growth, having overtaken the USD at one point as the GFC took it’s toll on the Eurozone.

In Australian Dollars Gold has performed relatively poorly in comparison over the same time period; however the Australian Dollar had already started falling against the US Dollar when Gold put in the November low. Due to this the price of Gold in AUD had already put in a rise of $220 (using monthly averages) in the 6 months prior to the start date of the above index.

Over the last half of 2008 the AUD dropped from almost parity against the USD to a low of just above 60. It’s back around parity now, short term, while commodities are performing well and the Australian economy is looking sound the AUD may remain high, but there are several scenarios that would see the AUD plunge again which could result in Australian priced Gold shooting to the upside (potentially a quick 20-40% gain).

If we saw a deflationary collapse and a short term selloff in USD Gold there is still the potential for a higher gold price in Australia, for example Gold at US$1250 with the AUD at 70c against the USD would see Gold at almost AUD$1800 here.

Other “commodity currencies” such as the Canadian Dollar and the South African Rand which have strengthened against the USD over the past 2 years have also had seen a more reserved price of Gold locally with the increase in their rate against the USD having offset some gains in the metal.

Priced in Yen Gold is still slightly off recent bull market highs as the JPY has strengthened against the USD following the devastating earthquake/tsunami. The carry trade has been suggested by some as the reason, as investors sell off higher yielding assets or currencies to pay back loans in Yen it increases demand temporarily for the Japanese currency. A similar situation arose around the USD during the depths of the GFC as traders sold riskier assets to payback their USD loans.

Gold priced in Yen is still well below its all time highs. Gold reached almost JPY205000 in 1980 and is trading today at around JPY115000. Demand in Japan for Gold is currently strong with premiums increasing by several dollars over past weeks.

The large increase in the price of Gold has not been a deterrent to buyers, in fact if anything with every leg higher in price comes a new wave of buyers eager to snap up Gold in different forms for differing reasons (articles below all from last several days).

Gold imports by India, the largest consumer and importer of the yellow metal in the world, is going to touch a record high in 2011 despite the high prices of gold.

According to initial estimates by the Bombay Bullion Association (BBA), imports of gold by India is steady and strong and could hit a record of 800 tons this year.

“Gold import by India is going up every month despite the high gold prices. Strong jewelery sales and consumer investment demand for gold are the main drivers for the surge in gold imports,” a BBA official said. Commodity Online

The ATM glitches & electronic transfer issues which have plagued Mizuho Bank in Japan (following the earthquake, tsunami and economic uncertainty) may have contributed to the demand for Gold in Japan which is pushing up premiums:

A scramble by Japanese investors for safe havens after a deadly earthquake has pushed physical gold premiums to three-year highs as buyers in less affected parts of the nation stretched supply, unleashing a trend that could give a lift to world prices.

Buying of the precious metal by investors and households in the west of Japan, combined with transport woes in the world’s third largest economy, usually a net gold exporter, could dry up supplies elsewhere in Asia, and inevitably push up world prices. Reuters

The issues in the Middle East look set to continue with escalating skirmishes between Israel and Palestine on the Gaza strip as Tuesday 8 Palestinians (4 civilians and 4 militants) were killed in retaliatory Israeli airstrikes.

There is also the potential for those that have had their assets frozen to use Gold as a source of funding (although similar rumours from Tunisia, where it was reported that the President had fled the country with 1.5 tonnes of Gold, were later said to be false):

The international community has hit Muammer Gaddafi with a raft of sanctions and asset freezes aimed at cutting off his funding. But the embattled Libyan leader is sitting on a pot of gold.

The Libyan central bank – which is under Colonel Gaddafi’s control – holds 143.8 tonnes of gold, according to the latest data from the International Monetary Fund, although some suspect the true amount could be several tonnes higher.

Those reserves, among the top 25 in the world, are worth more than $6.5bn at current prices, enough to pay a small army of mercenaries for months or even years. Financial Times

The demand from China also continues as both private investors and the central bank look to protect their assets and diversify:

Over in China meantime – where the World Bank now expects GDP growth of 9% this year – “Gold buying fever shows no sign of abating so far in 2011,” says the latest monthly report from Japanese metals conglomerate Mitsui.

“Gold sales on the Shanghai Gold Exchange were strong again in February, both before and after the Chinese New Year holidays,” says the report, noting that – by the end of last month – cumulative sales outpaced 2010 by one third, “running at double the pace of the early part of 2008 or 2009.” IB Times

All around the world this “ancient relic” is really starting to shine, as an item of jewelery, as a central bank reserve asset, as a wealth protection tool, as an inflation hedge, as a crisis hedge and as a source of funds when other assets are frozen. Gold has always been a diverse tool, but you wouldn’t have known it until recently.

From Westpac's Justin Smirk: The Melbourne

MS: RBA to cut in March and May

Macro Morning (waiting for US jobs)

By Chris Becker Another mixed night on macro