Whilst I was on vacation escaping the bitter Melbourne cold, Morgan Stanley Chief Strategist, Gerard Minack, released an excellent research article on the Australian housing market, entitled Living in a Bubble. Mr Minack’s article received widespread coverage in the press (for example, see here and here), so it is likely that many Australian readers are aware of his analysis already. And fellow economics blogger,  Cameron Murray, has provided some nice analysis of some of the key themes raised in this article.

I was lucky enough to receive a copy of the actual article upon my return from leave yesterday. And let me say that it is an enlightening  piece of analysis that pretty much supports everything that this blog has said about the Australian housing market. For the benefit of our international readers and those whom this analysis has escaped, I thought that I would provide an overview of the key themes covered and share some of my own thoughts.

Houses expensive no matter which way you cut it:

Further, house prices started to move above fair value around 2000 on all three valuation metrics, which is when the Australian housing bubble began.

Mr Minack’s fourth chart, shown below, is particularly interesting. It compares the multiple of median house prices to median gross household incomes by city size in the September quarter of 2009 in several Anglo countries – Australia, US, Canada, UK, New Zealand and Ireland. “The best-fit lines suggest that Australian house prices are around 40% more expensive than the average for UK, Canada, New Zealand and Ireland, adjusting for city-size. If the US is included, the overvaluation is around 85%.”

According to Mr Minack, “the single most important reason [for the housing bubble] is the increasing willingness and ability of households to increase leverage” [i.e. easy credit].

And in what should be a slap in the face of the property spruikers, he debunks the claim that population growth and housing shortages have played a significant role in driving-up house prices. As shown by the below chart, house prices outside of the capital cities have risen faster than capital city prices since the early 2000s.  As Cameron Murray correctly pointed out, “If such supply-side constraints really could explain prices, we would expect to see city prices climbing much more than in regional areas. Alas, this is not the case, with almost identical price gains in the past 15 years”. A large part of the increased willingness of households to increase leverage has come from the explosion of negatively geared (loss-making) housing investment. On this issue, Mr Minack’s research mirrors the findings of my earlier post, Negative Gearing Exposed. According to Mr Minack: Whilst Mr Minack acknowledges that residential housing has been an excellent investment over the past 10 years, due to the robust capital growth, he warns that it is “extremely unwise to expect such gains to continue given current valuations. The investment fundamentals of housing have sharply deteriorated.“

As shown by the below chart, “Australian Tax Office data confirm that residential investment is a poor investment: total rent has not covered total costs since FY2000 (the date the bubble started to inflate). In short, this is an investment that depends on capital gain for its payback. With net income not even covering interest charges, this is a classic Hyman Minsky Ponzi scheme”. Furthermore, the percentage of landlords claiming net rental losses (where rent fails to cover both interest and other costs) has blown out from 50% to 70% over the past decade (see below chart). According to Mr Minack, “it’s not just that there are more landlords, there are more loss-making landlords. This matters a lot. Much of the discussion on the residential market concentrates on owner-occupiers. But arguably property investors represent a significantly larger risk if they became widespread sellers of their loss-making investments”.

Bubble deniers often argue that the risk of widespread sales by investors is low since rental properties are mostly owned by higher income earners who are better placed to absorb losses. But Mr Minack debunks this claim as well:

Mr Minack also refutes the Reserve Bank of Australia’s (RBA) claim that Australia’s high household debt levels – currently 157% of disposable income – is not a major risk factor because it largely sits with upper-income earners: “…our [the RBA’s] assessment is that the increase in debt has broadly been concentrated in the hands of those generally more able to service it”.

Rather, as shown by the below chart, at the peak of the US housing bubble the top 20% of US households held an even larger share of household debt than their Australian counterparts. More debt as a share of the total is held by middle income households in Australia, most likely due to the high level of negatively geared property investment by middle income earners. Furthermore, the argument that debt levels are safe since asset values have also risen accordingly (and household balance sheets remain strong) is questioned by Mr Minack:

“The essence of every asset bubble is that asset prices rise as debt levels rise. The process is linked: rising asset prices encourage more borrowers, and the higher asset prices often serve as collateral for additional borrowing. That is why debt-to-asset ratios do not look problematic at the top of most asset bubbles.“

Mr Minack provides an ominous chart (below) showing the debt and asset holdings of American households ranked by income in 2007. At all income levels, asset values exceeded debt levels. Yet this apparent balance sheet strength did not prevent the widespread meltdown currently being experienced by the US housing market and broader US economy. 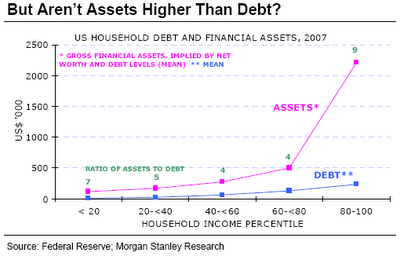 A bubble in search of a prick:

Mr Minack completely rejects the notion that Australia’s housing market is somehow different from the rest of the world and that our economy is not at risk from a significant housing correction:

“The global financial crisis was rooted in excess debt, particularly housing-related debt. Many analysts take comfort from the differences between the Australian housing market and America. But this was a global bubble, and house prices are down in many countries that had seen house prices rise over the past decade. Many of those other markets did not share the same peculiarities of the US market (fixed rate mortgages, non-recourse lending, sharp increase in supply). To say Australia is not America is to knock over a straw man.”

Although Mr Minack notes that bubbles more often pop than subside, he believes that it is unlikely that Australia’s housing bubble will burst abruptly and we will see large price declines in the near term, since this outcome would require broad-based job losses. Rather, the best case outcome for Australia is that real house prices deflate slowly as they did in Sydney from the late 1980s and from 2004.

Nevertheless, he warns that house prices can show no growth in real terms for many years. For example, real house prices in Melbourne did not surpass their 1891 peak until 2001 (see below chart). And he expects real returns on residential property investment to be negative over the next decade. Mr Minack believes that there is a risk that flat to falling house prices could create “selling pressure” from negatively geared (loss-making) property investors looking to exit the market.

I will add that the pending retirement of the Baby Boomer generation is likely to accelerate selling by property investors. As discussed in my previous post:

“A key driver of Australian house prices since 2000 has been the explosion of negatively geared housing investment as the Baby Boomer generation reached their peak earnings age and started ‘saving’ for retirement by speculating on housing. But with the Baby Boomers soon to enter retirement, they will no longer be able to negatively gear. Further, since rental yields are pathetically low (around 3% after costs) and with the potential for continued capital appreciation diminished, it is highly likely that the Boomers will dump their investment properties en masse in order to fund their retirements, thereby causing a nasty housing correction”.

For these reasons, a housing correction is, in my opinion, inevitable. It’s only a matter of when and by how far prices fall.

In conclusion, Mr Minack takes a swipe at policy makers for allowing the housing bubble to inflate in the first place and questions the broader social and economic impacts arising from rising house prices:

“It was a major error by policy-makers to let this bubble inflate, in my view. There is no value to society from rising house prices. It is simply a wealth transfer to existing owners from potential buyers. Pumping up house prices creates no more wealth than the RBA printing an extra six zeros on every piece of currency. Worse, by increasing the leverage in the household sector and financial system, it increases the financial risks in the economy, as the last two years have demonstrated elsewhere. In short, there seems a strong case for policy-makers to aim to cap house prices.”

I couldn’t agree more. As discussed in Bringing it Home, in light of the major role that excessive credit has played in creating Australia’s housing bubble, and that the Australian banking sector faced insolvency requiring a Government bail-out during the GFC (via the bank funding and deposit guarantees), there is a clear role for greater regulation of mortgage lending to prevent the excesses that lead to asset bubbles. One solution is to introduce macro-prudential measures, such as maximum loan-to-value ratios,  debt service to income limits, or limits on the amount of loans that can be extended against short-term funding sources. Such measures would help to strengthen the resilience of Australia’s financial system by mitigating the build-up of excesses in credit growth and asset (house) prices.

Had such macro-prudential measures been in place globally during the 2000s, it is possible that the GFC would never have taken place, since the kinds of speculative housing lending undertaken in the United States and Europe would not have been possible. It is also likely that Australia’s house prices would never have surged like they did post-2000, since access to credit and the ability to undertake highly leveraged purchases would have been muted. Houses would now be much more affordable as a result.

Furthermore, the new Australian Government should, in it’s first term, undertake another Financial System Inquiry (FSI) to examine some of these financial stability issues. The previous Inquiry (the ‘Wallis’ Inquiry), completed in 1997, never envisaged systemic risk engulfing financial markets as well as intermediaries, as occurred during the GFC. Nor was the Basel Committee’s idea of macro-prudential regulation (discussed above) ever considered. Finally, the Government’s October 2008 decision to guarantee bank funding and deposits completely ignored one of the original FSI’s key recommendations – that no government would ever guarantee any part of the financial system. The long-term implications of using the Government’s balance sheet as role of guarantor of last resort for the banks’ wholesale debts is also unclear and needs to be comprehensively examined by such an inquiry.

Let’s hope that the new government tackles these important issues.